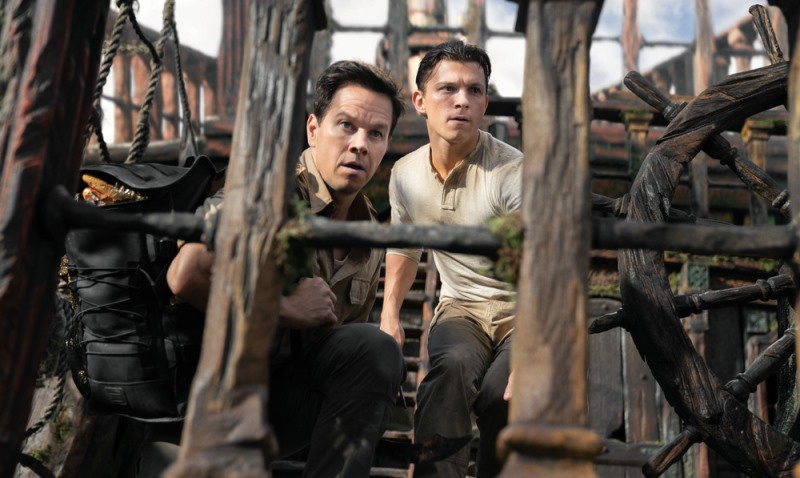 This week’s releases include a death-defying treasure hunt; a satisfying rom-com; a bloody gang war; a horrifying depiction of bullying; and several library classics.

A werewolf loose in Los Angeles changes the lives of three young adults who, after being mauled by the beast, learn that the only way to break the curse put upon them is to kill the one who started it all!

This is horror icon Wes Craven’s 2005 take on the werewolf legend. The film starred popular actors of the time, including Joshua Jackson, Christina Ricci, Jesse Eisenberg, Mya, Shannon Elizabeth, Portia de Rossi, Judy Greer and Milo Ventimiglia. Of course, some of these attractive young people are brutally massacred by the beast, with one particularly memorable death involving a still-animated severed torso. There’s an element of mystery built into the narrative as the afflicted group try to first figure out what is happening to them and then who infected them. It feels a bit glossy for a horror film, but Craven’s love of the genre shines through to deliver an entertaining and occasionally frightening movie.

Special features include: unrated and theatrical cuts; commentary by special effects artist Greg Nicotero and actor Derek Mears; “Behind the Fangs: The Making of Cursed” “A Sheep in Wolf’s Clothing”; “A Movie That Lives Up to Its Title”; “The Cursed effects”; “Becoming a Werewolf”; “Creature Editing 101”; and theatrical trailer. (Scream Factory)

A boy is killed and his family embark on a gangland war with an international cartel — a war that is impossible to win. But the Kinsellas have something the cartel does not: the unbreakable bonds of blood and family.

The gangster has a long history on screen, portraying both the dangerous yet glamourous life of the criminal, as well as the dedicated detectives who work to take them down. This series follows an Irish family whose desire for personal revenge tears their family apart and pits them against an even stronger cartel against whom the odds are slim they will emerge intact. Notably, one of the differences between this narrative and similar Italian mafia films is the kids are not off limits. This raises the stakes in their war as each retaliatory move involves a calculation of how much risk they’ll put their children in in exchange. It’s a very intense and violent series that shows Daredevil’s Charlie Cox in a very different light.

There are no special features. (AMC Networks)

A heartbroken pop star (Jennifer Lopez), slated to marry her pop star fiancé (Maluma) on stage, instead marries a stranger from the audience — a high school math teacher (Owen Wilson). Against the odds, their relationship develops into something real… but can their love survive the limelight?

Some years ago, Lopez and Wilson were go-to stars for big screen rom-coms, but it’s been a minute since either featured in a meet-cute story. Fortunately, neither has lost their talent for the genre, delivering a very sweet and engaging movie that will please viewers in spite of its unlikely scenario. One of the film’s key highlights is the original songs written for the picture and performed by Lopez (and Maluma). The lyrics are soulful, while also furthering the narrative and spotlighting Lopez’s lovely voice. Unsurprisingly, the pop star enjoys the sense of normalcy she experiences when slumming it at the high school or hanging out at the teacher’s house, away from the demands of her career and public. Yet, she’s also able to use her experience to help his daughter even though their lives couldn’t be further apart. All of these elements combine to produce one of the better adult romantic comedies in recent years.

The everyday reality of grade school is seen from a child’s-eye-view as an obstacle course of degradation and abuse. Following 7-year-old Nora (Maya Vanderbeque) and her big brother Abel (Günter Duret), we see Nora struggling to fit in before finding her place on the schoolyard. One day, she notices Abel being bullied by other kids, and though she rushes to protect him by warning their father, Abel forces her to remain silent, while he endures more humiliation and harassment by his peers.

This film should definitely include a trigger warning as it could be challenging for viewers who were bullied in school. Nora’s ignorance of the playground rules puts Abel in a difficult situation as he feels obligated to protect her, jeopardizing his own place in the hierarchy. What follows is a series of appalling scenes of bullying, to which teachers appear to be oblivious even though they frequently occur in the open. The code of silence adopted by children to avoid worse treatment is familiar, though from an adult lens it’s lost its appeal. In the end, it’s a rather depressing but relevant portrayal of childhood that to some extent reminds adults they can’t protect their kids from everything as other kids can be unconscionably cruel.

Having just moved from Beijing, elderly tai chi master Mr. Chu (Sihung Lung) struggles to adjust to life in New York, living with his Americanized son Alex (Ye-tong Wang). Chu immediately butts heads with his put-upon white daughter-in-law, Martha (Deb Snyder), a writer who seems to blame him for her own paralyzing inability to focus. But when Chu begins teaching tai chi at a local school, his desire to make a meaningful connection comes to fruition in the most unexpected of ways.

This was Ang Lee’s 1991 feature debut, exploring the dynamics of a family that is caught between traditional and modern values. Alex fully embraced his American life, but his father’s retirement awakens a desire to return to his Chinese values, which include supporting and respecting his parent. Chu is glad to be near his son and grandson, but his ideals do not align with their American household. In spite of Martha and Chu spending most of their days in the house alone together, the language and culture barriers build an insurmountable wall between them. Finding a like-minded Chinese woman and others interested in practicing tai chi provides Chu some relief, but he decides to make the ultimate sacrifice for all their sakes. Lee’s attention to emotional detail is already clear in this picture and opens the door to the many types of relationships he’d explore in the future.

Ai works for an escort agency that specializes in providing S&M services to high-end clients. Thus, audiences are invited to watch these encounters as she reluctantly allows herself to be humiliated and dominated by men ranging from business executives to yakuza. She doesn’t enjoy her work, but it seems to be filling some hole in her life. When she’s not working, Ai appears to be looking for additional purpose, seeking advice from fortune tellers and going on a precarious journey to confront someone from her past. Most notably, audiences are not provided any insight into Ai’s internal thoughts, so they’re left to guess her motivations and/or watch her story passively — much as she seems to be experiencing it.

A look at the danger and excitement that awaits every pilot at the Navy’s prestigious fighter weapons school. Pete ‘Maverick’ Mitchell (Tom Cruise) is a daring young flyer who’s out to become the best of the best, but he meets a civilian instructor (Kelly McGillis) who teaches him a few things you can’t learn in a classroom.

In 1986, Cruise was quickly climbing the ranks of Hollywood sex symbols and this picture cemented his position at the top of the heap. It raised him above his formerly boyish roles, letting him finally play a character with some edge. “I feel the need — the need for speed!” His partnership with Anthony Edwards is a memorable pairing that drives the film, while the exciting air combat scenes constantly inject the film with bursts of adrenaline. Moreover, these fast-paced scenes are far more captivating in high definition. The film has aged well and continues to be a source of entertainment even after repeat viewings — not to mention a pop culture staple.

Street-smart thief Nathan Drake (Tom Holland) is recruited by seasoned treasure hunter Victor “Sully” Sullivan (Mark Wahlberg) to recover a fortune lost by Ferdinand Magellan 500 years ago. What starts as a heist job for the duo becomes a globe-trotting, white-knuckle race to reach the prize before the ruthless Moncada (Antonio Banderas), who believes he and his family are the rightful heirs. If Nate and Sully can decipher the clues and solve one of the world’s oldest mysteries, they stand to find $5 billion in treasure and perhaps even Nate’s long-lost brother…but only if they can learn to work together.

Based on the PlayStation video game of the same name, the movie brings characters some viewers have accompanied on numerous adventures to the big screen to tell its main protagonist’s origin story. The stunts are big and thrilling from start to finish. The film’s casting is one of its greatest benefits, beginning with the brotherly camaraderie between Wahlberg and a surprisingly buff Holland. The pair spend much of the movie effortlessly razzing each other, bringing a natural sense of humour to the narrative. Conversely, Banderas is always an impeccable bad guy who brings a sense of intensity and desire to his character, while Tati Gabrielle hones her ruthless personality in this more grown-up villainous. Sophia Ali’s explorer falls somewhere in the middle as she walks the line between attractive team player and femme fatale who proves equally capable in their search for gold.