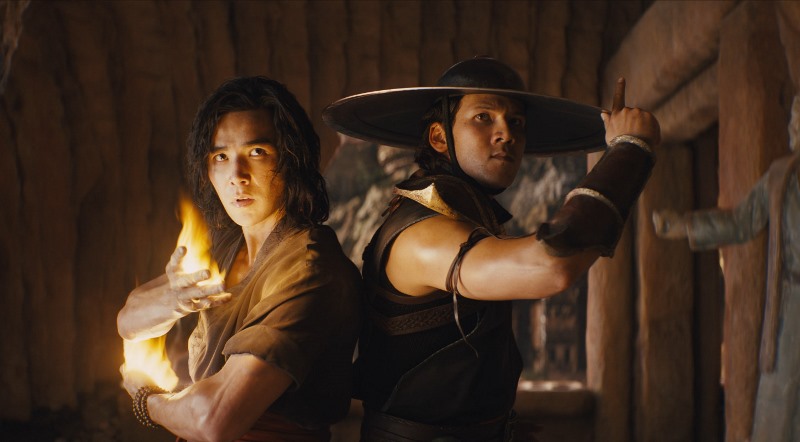 This week’s releases include a reimagining of a beloved video game; a cover-up gone extremely wrong; a cat-and-mouse chase with a serial killer; a musically-powered tale of love and growing up; and a more disturbing remake.

The semi-autobiographical odyssey of 15-year-old William Miller (Patrick Fugit), whose writing talent and earnest passion for rock music earns him an assignment for Rolling Stone, interviewing and touring with Stillwater (Billy Crudup, Jason Lee). Penny Lane (Kate Hudson) is the young groupie who guides him through the wild world of rock heroes, all-night parties, and the most dangerous experience of all — love.

Based loosely on the Cameron Crowe’s early career as a music writer, this movie captures all the ups and downs of being on tour, whether you’re a musician, “band aid” or aspiring reporter not even out of high school. Penny attempts to show William what it’s like to embrace the chaos and really love the music — but there’s no way to separate that admiration from the band that delivers the sound. Thus, William breaks the cardinal rule imparted to him by Lester Bangs via a fantastic supporting performance by Philip Seymour Hoffman — don’t become friends with the band. It’s an unreal adventure that moves from town to town, backstage to hotel rooms, tour bus to deathtrap plane. It’s endearing and enduring as each performance envelops the viewer in this heartfelt tale of rock ‘n’ roll set to an epic soundtrack that stands alone and guides the film, which won the Golden Globe for Best Motion Picture — Comedy or Musical.

When their car breaks down on a road trip, six college friends are sidetracked into an eerie backwoods town. Curiosity gets the better of them when they are intrigued by its macabre House of Wax. They soon find out that the town is not what it seems, and that they must find their way out before they fall victim to its ghoulishly inventive killers.

Adapted from a 1953 film of the same name, this movie aims to be — and mostly succeeds in being —  more horrific than its predecessor. The follows the classic trope of trapping a group of attractive young people in an irrational, inescapable situation with a crazed and brutal killer. They are dispatched in gruesomely creative ways that showcases the talents of the special effects team and is explored in the bonus features. For 2005, the picture also featured a top notch cast, including Chad Michael Murray, Elisha Cuthbert, Jared Padalecki and Paris Hilton. There’s definitely some standout moments involving a pipe and others (obviously) with wax that have become synonymous with this movie, even if the rational for no one ever figuring out what happened to the town seems farcical.

While in Florida on another case, FBI agents Helter (Bruce Willis) and Lombardo (Megan Fox) cross paths with state cop Crawford (Emile Hirsch), who’s investigating a string of female murders that appear to be related. Lombardo and Crawford team up for an undercover sting, but it goes horribly wrong, plunging Lombardo into grave danger and pitting Crawford against a serial killer in a twisted game of cat and mouse.

This movie seems to be trying to shed a light on the dangers of the sex trade as a number of women are murdered and only a handful of people care enough to try to stop the serial killer. Willis’ role is limited, but he pulls out his stereotypical, hard-boiled cop character for the movie. Fox and Hirsch take centre stage as they refuse to let the case die, hoping to lure the murderer into a trap. Of course, that would be too simple so an inexcusable mistake leads to an unplanned confrontation. Lukas Haas gives a surprisingly cool and calculated performance, while Hirsch and Fox struggle somewhat in these unfamiliar roles.

MMA fighter Cole Young (Lewis Tan) must train to unlock his true power and stand with Earth’s greatest champions against the enemies from Outworld in a high-stakes battle for the universe.

The first thing to make clear is this movie is entirely unrelated to the 1995 film of same name. Cole is a wholly new character created to be the protagonist of this picture and carry forward a somewhat wasted tale surrounding Scorpion and Subzero. The rest of the fighters will be familiar from the video game, including some more obscure personalities that act as a pleasant surprise. The film also deftly incorporates their fighting styles and finishing moves into the narrative, allowing for exciting throwbacks to the arcade game. The plot is expectedly thin, but the heavy CGI and special effects battles make up for the lack of story. It’s also nice to hear the cast and crew’s passion for the source material in the bonus features.

Judge Michael Desiato (Bryan Cranston) treads carefully through a high-stakes game of lies, deceit and impossible choices after his teenage son, Adam (Hunter Doohan), is involved in a hit-and-run incident. Unbeknownst to Adam, the victim is the son of much-feared crime boss Jimmy Baxter (Michael Stuhlbarg) and his wife, Gina (Hope Davis), who might be even more dangerous than her husband.

The movie begins pretty mundanely until the accident occurs and there’s a frenzy of activity to cover it up. From that point forward, a common phrase audiences may find themselves repeating is, “If they’d just gone to the police from the start.” Of course, the instinct to avoid the wrath of a mob boss isn’t wrong, but it leads to so many more problems and deaths that everyone may have been better off if Adam had fessed up. The number of acceptable casualties to save one life is difficult to swallow, making the story fittingly uncomfortable for multiple reasons. Everyone gives excellent performances in telling this seemingly never-ending tale of obstacles and hoops to jump through. Special features include: deleted scenes. (Showtime Entertainment)