Whether you have it or not, money is always a concern; there never seems to be enough of it, regardless of how much you actually possess. Capitalism revolves around the need to make more and spend more, trapping consumers in an endless cycle of wanting. But no one can just suddenly raise their worth — except in the stock market (and, I guess, the lottery). No matter what anyone says, there are no guarantees; it’s as much of a gamble as any Vegas bet and the losses can be equally devastating. Money Monster as an extreme illustration of the latter.

Lee Gates (George Clooney) is the host of “Money Monster,” a TV show that analyses the market and offers stock tips. Today his director, Patty Fenn (Julia Roberts), has arranged for him to interview the CEO of recently favourable pick IBIS, Walt Camby (Dominic West), whose shares just plummeted for a net loss of nearly $1 billion. However, their regularly scheduled program is interrupted when gunman, Kyle Budwell (Jack O’Connell), storms the set and takes the crew hostage. He doesn’t accept the current explanation that a glitch resulted in such a catastrophic decline; he wants real answers for himself and his fellow affected shareholders. But Walt is nowhere to be found, leaving Lee alone to hold the explosive bag.

This movie has the feel of Dog Day Afternoon, in which a disadvantaged underdog goes to extreme and very public measures to accomplish something. Al Pacino’s character was a little more controversial, but he and Kyle have a fair amount in common. Kyle views himself as the voice of the people; he represents all the little guys who try and fail to get their piece of the pie because the widespread fat cats are too greedy to share; he believes they’re all in cahoots to increase their share at the expense of everyone else. These are familiar conspiracy theories, but as the movie’s tagline suggests, “Sometimes a conspiracy isn’t just a theory.” 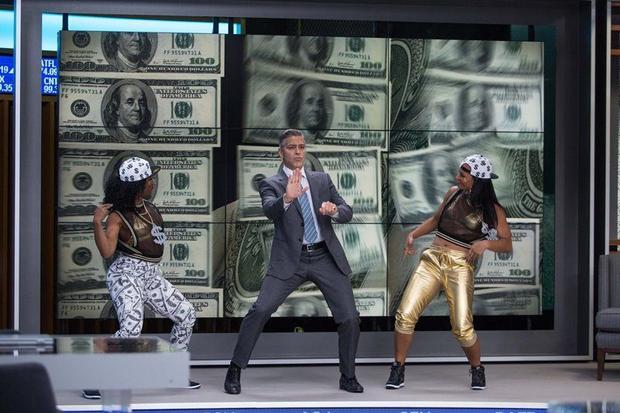 At any given moment, there’s a lot happening. Studios are hectic environments to start so even before the show begins broadcasting there’s a lot of busy work occurring; from Lee confirming his dinner plans while getting final touches on his hair and make-up to camera operators getting into position to Patty delivering final instructions and ensuring everything is queued up as they prepare to go live. Although there are long moments of pause, the frenzy continues after Kyle’s arrival. The set is a bundle of nerves literally on the brink of explosion, while the control room in the building and the police outside are actively moving parts trying to defuse the situation.

In addition to a lot physical activity, the film itself is trying to depict a great deal. Lee is an absurd TV personality who relies on every possible gimmick — including poor dancing with girls that certain viewers refer to as “hookers” — to maintain the audience’s attention and ratings. He’s crass and confident in his attempts to make the stock market appealing to the lowest common denominator… essentially, he’s the Howard Stern of financial news. And Patty is the glue that holds it all together. Clooney and Roberts are an excellent pair, and neither has ever really played roles quite like these. However, the film also endeavours to demonstrate the ruthlessness of the world inside and outside of business via moments that clearly require some moral or ethical decision. And finally, it also seeks to demonstrate the borderless world of globalization as this seemingly local story is also tied to three other continents. Director Jodie Foster’s attempts to meet these various goals occasionally cause it to be abrasive, but it generally works.