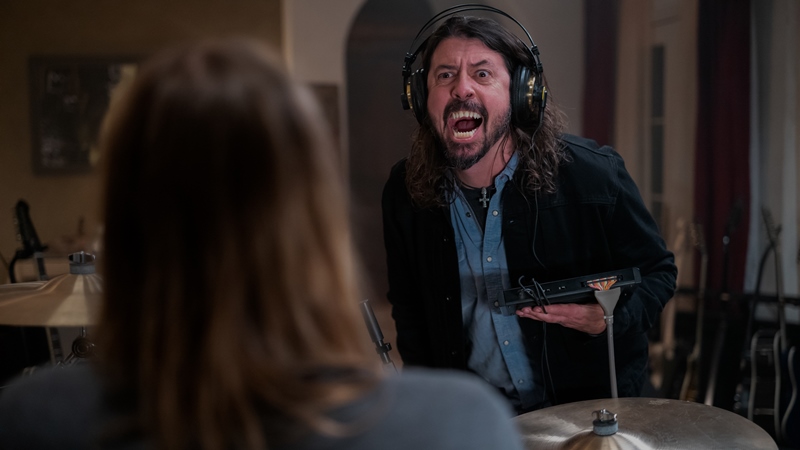 In Studio 666, Foo Fighters are at risk of unleashing a major evil onto the world if their newest album, recorded in a haunted mansion, gets released.

Horror is one of the most versatile genres in cinema, whether it’s a low budget gore fest, a thoughtful social commentary or a slasher comedy. It’s also been the entry point for other types of entertainers to get on movie screens, from tabloid celebrities to music artists. If you can look frightened and let loose a blood-curdling scream or simply appear menacing, you’re already halfway there. However, the genre’s adaptability shouldn’t be associated with a lack of talent or poor storylines as it still demands a lot of its performers and crew. Thus, the Foo Fighters took on a challenge when choosing to star in Studio 666.

The Foo Fighters are set to release their 10th album, but frontman and songwriter Dave Grohl has writer’s block. The pressure from the studio is mounting, so they decide a change of scenery is in order. Renting a vacant mansion, the band moves in and vows not to leave until they’ve recorded the album. However, years earlier, another band made a similar promise they never fulfilled. Now, strange sightings and a disturbing discovery in the basement may doom the Foo Fighters to the same fate — unless they can break the curse and save themselves before it’s too late.

Director BJ McDonnell has worked behind the camera on horror films and music videos, making him an ideal pick to helm this picture that’s blending an album recording and a scary movie. Similarly, Foo Fighters have often created music videos in which they play out various scenarios, so they’re not entirely unfamiliar with acting. Unsurprisingly, Grohl also had a hand in penning the script, likely instilling it with the band’s personality since he’s admittedly not a big horror fan. Even so, they are not professional actors and their performances are a bit wooden — they often have the inflections of their lines correct, but their faces fail to reflect it. Luckily, the supporting cast, including Whitney Cummings, Will Forte, Jeff Garlin and Leslie Grossman, pick up some of the slack.

The film resourcefully draws on other horror pictures to inspire key elements of the story. Grohl’s wish to isolate the band in an attempt to break their creative block recalls Jack Torrance’s similar desire in The Shining and the comparisons carry on as the frontman loses his grip. Meanwhile, the unearthing of a blood-hungry spell book is a clear callback to Evil Dead’s Necronomicon and another scene recalls the grisly mystery, Fargo. The kills are remarkably innovative and satisfyingly gory with a lot of expertly crafted practical effects and realistic prosthetics. Consequently, these entertaining deaths enhance the movie’s enjoyment.

Interestingly, the music at the film’s core is metal, which is not the band’s forte, building on the fictional aspect of the narrative. That said, Grohl did write the former house band’s metal album, which in turn feeds his vision for the Foo Fighters’ next album. It’s hard-core, but not alienating to any viewers not fond of the musical genre or those expecting something more in the band’s wheelhouse.

In the end, the audience’s amusement relies to some extent on their connection to the band at its centre. If you don’t like Foo Fighters, you may find it more difficult to engage with the picture and appreciate some of its humour. It’s unfortunate so many of the comedic punchlines are edited into the trailer, so avoiding it and going in cold could actually enhance the enjoyment on the first watch.