It’s safe to say Star Wars: The Force Awakens is one of the most anticipated movies of 2015. For nearly two years, fans have waited to see what new adventures and threats Episode VII would deliver. Between teaser videos from director J.J. Abrams in support of the UNICEF campaign, enthusiastic fan events boosted by exclusive footage and very promising trailers featuring fresh and familiar faces, the countdown to the release could not move fast enough. And now it’s finally here and it’s everything fans could have hoped for and more.

Thirty years after the events of Episode VI: Return of the Jedi, the Empire has been replaced by the First Order, which is possibly the biggest threat the intergalactic heroes have ever faced. Poe Dameron (Oscar Isaac) is the Resistance’s best pilot and he’s on a special mission related to Luke Skywalker (Mark Hamill). But when he’s derailed, the responsibility is left to Rey (Daisy Ridley), a scavenger, Finn (John Boyega), a reformed Stormtrooper, and BB-8, a small droid carrying vital intelligence. Meanwhile Kylo Ren (Adam Driver) and General Hux (Domhnall Gleeson) are scorching the universe trying to quash Resistance forces under the direction of Supreme Leader Snoke (Andy Serkis).

Some of the best parts of this movie are its twists and surprises — all of which will remain unmentioned but should definitely be expected. The thrill of watching the narrative unfold is finally seeing everything that has been kept under wraps until now. The mix of old and new characters mesh seamlessly, interacting naturally, drawing on the past and combining their efforts for good or evil. The return of Han Solo (Harrison Ford) and Chewbacca (Peter Mayhew) provides a surge of nostalgia that immediately fills the theatre with a renewed energy. And it’s equally satisfying to see the space “junk” known as the Millennium Falcon is still a formidable piece of machinery. Rey and Finn have an entertaining and sustainable chemistry, while Poe is the new smart-aleck of the group. On the opposite side of The Force, Kylo Ren’s temper tantrums rival even Anakin Skywalker’s as the dark side nurtures his anger and petulance. 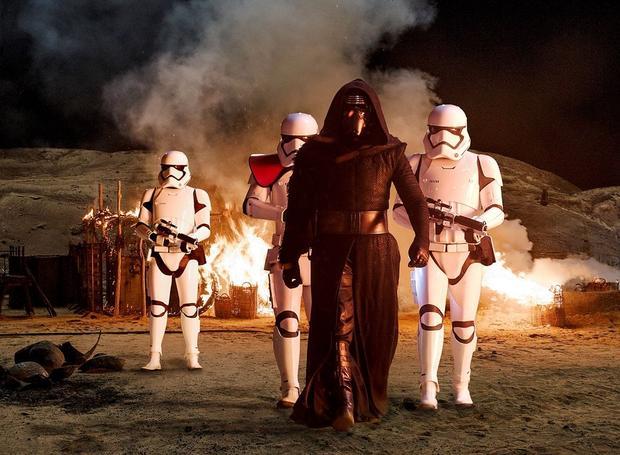 A scene from ‘Star Wars: The Force Awakens’
Lucasfilm

Abrams’ efforts to create a visually captivating experience are well worth the trouble, producing perhaps his best film to-date. Shooting on location in Abu Dhabi, Iceland and Ireland, using real sets and practical effects, give the film a tangible feel that cannot be accomplished with CGI. In addition, using 35mm film instead of digital to capture the images (and 65mm for IMAX) gives everything a richer finish. The result is a stunning picture from which audiences will not be able to tear their eyes. Though it should also be noted the 3D is converted from 2D footage, but still looks quite impressive.

The script is intricately crafted to remain faithful to its predecessors (IV through VI as the prequels do not apply) while expanding the franchise’s universe to encompass new worlds and characters that will carry the narrative forward. Travelling from desert planets to lush green landscapes shows the diversity of the cosmos, and the reach of the First Order whose similarities to the Nazis are slightly less cloaked in this feature. The pace is excellent, altering between exhilarating action sequences, and developing the relationships and personalities of the individuals. It’s also very funny, injecting humour throughout the entire film that is effectively delivered by a number of different characters. Although it doesn’t feature the array of imaginative alien figures seen in other pictures, there is a bar scene that definitely allowed the special effects team to flex their creative muscles; and Lupita Nyong’o‘s Maz Kanata is a shining example of this ingenuity. 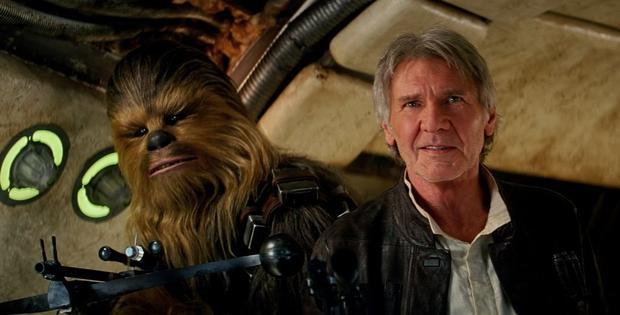 A scene from ‘Star Wars: The Force Awakens’
Lucasfilm

The returning cast reprise their roles as if they’d never left them, effortlessly recreating the dynamics established decades earlier. The new actors are perfectly selected and appear remarkably unintimidated by their counterparts, instead taking the opportunity to match their wit and talent. Ridley is enchanting and demonstrates some adept fighting skills with a staff and light saber. Her charm consistently lights up the screen when she appears, which is quite often. Boyega’s performance is a little more hesitant as Finn tries to find his place amongst his former enemies, but he displays a perceptible resolve. Isaac is the franchise’s new Ford, delivering charisma and humour even in seemingly straightforward situations such as leading an attack squad. And Driver’s villain is more conflicted than Darth Vader as he tries to live up to his evil idol. However they are all overshadowed by the introduction of BB-8, which is so much cuter than even the trailer suggests.

As the credits began to roll and the lights came up, there was one sentiment that reverberated throughout the theatre: “I want to see it again.”