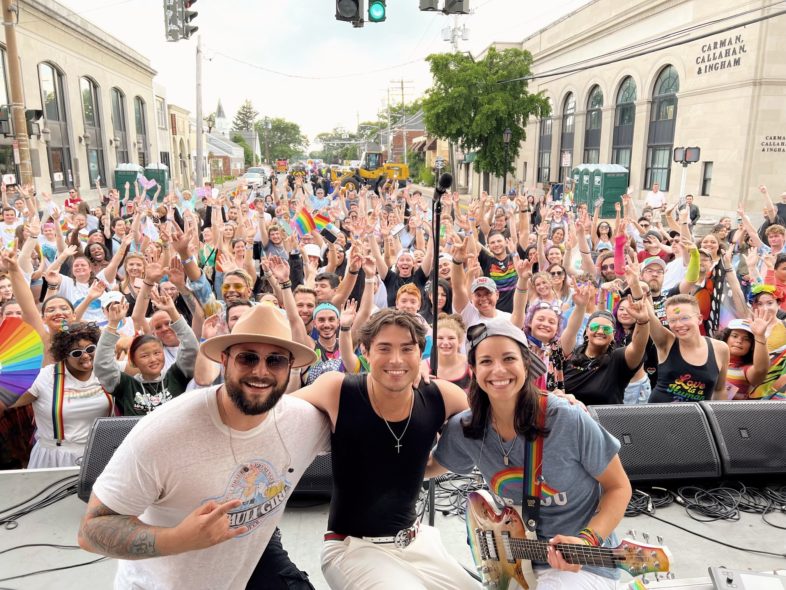 On June 12, the Nick Tangorra Band headlined Pride 2022 in Farmingdale on Long Island.

The LI Pride Parade was hosted by Erin Colton, the award-winning TV anchor and beloved reporter.

Tangorra kicked off his set with the enthralling “Shut Up & Dance,” which had a retro vibe to it, and they immediately broke into  Neon Trees’ “Everybody Talks.” He showcased his rocking side with Joan Jett’s “I Love Rock ‘n’ Roll.”

He was able to dust off Britney Spears’ “Baby One More Time” and he made it his own thanks to his rich and resonant voice.

His version of “Uptown Funk” was crisp and refreshing and he did Dua Lipa justice with “Don’t Start Now.” He displayed his sultry vocals on Amy Winehouse’s “Valerie” and “Killing Me Softly with His Song.”

It was great to hear his original single “Boo Hoo” in the set, which was an added bonus. AnnMarie Buonaspina delivered on the lead guitar, and Rafe Tangorra nailed the drums; moreover, they were both gifted musicians in their own right.

After an impressive version of Lit’s “My Own Worst Enemy,” he closed his set with The Killers’ “Mr. Brightside,” where everybody was reciting the lyrics verbatim and the alternative rock classic “Stacy’s Mom,” where they left the Long Island crowd yearning for more.

Overall, the Nick Tangorra Band was superb in Farmingdale, Long Island, as part of this year’s LI Pride event. They are highly recommended to see in concert. They always manage to put on an incredible and high-energy live show. Bravo.