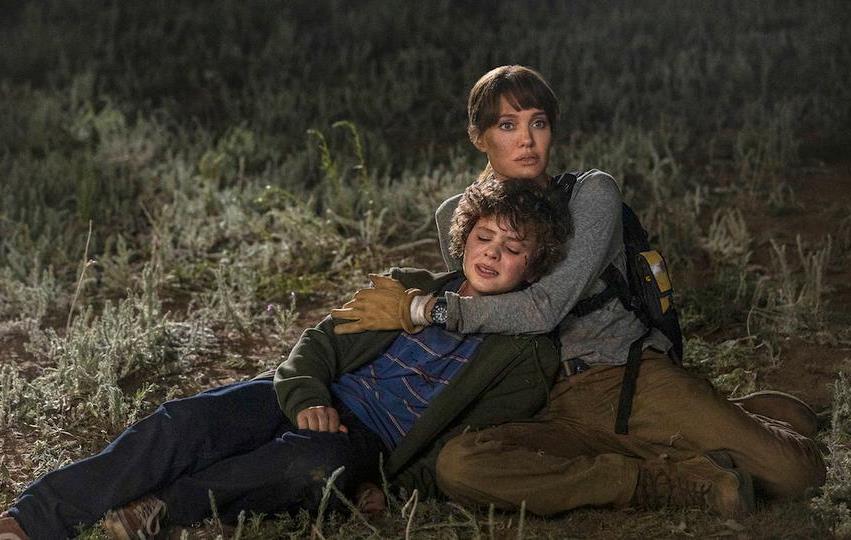 This week’s releases include a cat-and-mouse chase at the edge of fire; an Australian political drama; a new chapter of the Midnight Society; a classic tale of murder; an all-star ensemble; a look at life in diapers; and a still enduring horror franchise.

A Place in the Sun (Blu-ray)

George Eastman (Montgomery Cliff) is determined to win a place in respectable society and the heart of a beautiful socialite (Elizabeth Taylor). A factory girl’s dark secret threatens George’s professional and romantic prospects.

The film was released in 1951, adapted from a novel published in 1925, which was in turn based on a real-life crime committed in 1906. George’s uncle seems happy to help his less fortunate nephew, even insisting he gets a position in an office rather than the assembly line. However, in spite of having eyes for the socialite, George seduces the factory girl who practically bends over backwards to make him happy. One of the more interesting elements of this narrative is its handling of an unwanted pregnancy and potential abortion in the Production Code era. Consequently, at no time are the words “pregnant” or “abortion” uttered; instead, audiences are left to infer the situation from common euphemisms like she’s “in trouble” and she wants “someone to help her.” The ending is not unexpected and the morally corrupt are fittingly punished as per the Code.

Are You Afraid of the Dark? Curse of the Shadows (DVD)

A new setting and a new Midnight Society bring fresh scares when the group’s leader suddenly vanishes, prompting the remaining members to search for clues, confront dark forces, and ultimately uncover the truth behind their seaside town’s terrifying curse.

This tale shares a number of similarities with the Slender Man legend, except that they’ve renamed it the Shadow Man and attached a tragic origin story to it. When the storytelling group’s leader fails to go to school or their next meeting, they suspect something terrible happened to him, but it takes a pretty extensive investigation to figure out exactly what befell him. In the meantime, one of the members contends with a younger brother who insists on tagging along and comes up with a creative solution to keeping her family at home… and out of harm’s way. In the midst of all the magic and danger, two other members are also learning how to navigate their feelings for each other. The supernatural element of the narrative is once again far more extreme than the that of the original series, extrapolating a basic curse to include time travel and ignore the associated classic paradox of altering the past.

A group of young counsellors prepare for the reopening of Camp Crystal Lake, where a boy drowned years earlier. One by one, the counsellors are stalked by a mysterious and violent killer.

While Jason Voorhees would become the star of the franchise, this film featuring his brutally murderous mom launched the series. Complete with salacious young people and inventive kills, this movie has scared and entertained audiences for more than 40 years. Released right in the midst of the slasher movie’s heyday, the gory massacre became a cult favourite and horror classic. It also helped establish the formula and “survival rules” that would define the genre. Many aspiring actors got their break in horror pictures and this one features a young Kevin Bacon among its many victims. The bonus features take audiences behind-the-curtain, including tidbits about low budget filmmaking and practical effects, as well as tribute to the late director.

Return to the terror of Camp Crystal Lake and re-experience all the screams, scares, and creative kills. From the too-often ignored warnings of Camp Crystal Lake’s “death curse,” through an ever-increasing body-count that culminates on the streets of New York City, the hockey-masked mayhem is unleashed and unstoppable.

This franchise is one of the most well-known in the horror genre as its murderous protagonist repeatedly goes on killing sprees in the small lakeside area, and campers and cottagers continue to return to provide a fresh batch of victims. Jason Voorhees adopted a multitude of weapons over the years, as well as been creative when nothing obvious was at-hand, which results in some of his most memorable kills, including a sleeping bag massacre. Most of his victims are attractive, unsuspecting young people and have included Kevin Bacon, Corey Feldman and Crispin Glover. He generally remains close to Crystal Lake, but he has ventured as far as New York City in pursuit of some pesky teens who just won’t die. Of course, this set excludes his greatest and furthest venture, which took him to space. It’s interesting to watch the progression of the franchise as different directors took the helm and different actors took on the iconic role with even his mask changing over time.

This is a massive undertaking with dozens of actors, multiple concert scenes and a number of original songs. From a young songstress pushed to the brink by her popularity and relentless schedule to a womanizing musician who insists on reconnecting with an old flame in spite of their estrangement to an eccentric woman whose view on life and music is difficult to follow to an ambitious woman without a lick of talent who refuses to give up on her dreams. The film runs the gamut of life in the music industry, while displaying some excellent performances on- and off-stage. One of the most striking moments is Carradine’s intimate show where he appears to be serenading a woman… and every woman in the room thinks it’s her.

Rugrats: The Complete Series (DVD)
The series follows the secret life of babies Tommy, Chuckie, Phil, Lil, Kimi, and Dil, plus toddlers Angelica and Susie, as they embark on misguided adventures (in reality and their vivid imaginations) right under the noses of their unsuspecting parents and grandparents.

This Nickelodeon show was released in 1991 when most of its best and most memorable series were on air. They sounded like babies and toddlers, but they weren’t annoying or over-the-top. They spoke to each other with full vocabularies, which they used to share their fantastical theories of everyday occurrences. Tommy was the tiny group’s leader, Chuckie was his advisor, and the twins, Phil and Lil, were the enforcement. Angelica was their bully who believed she knew much more than the younger children and took many opportunities to misinform them of things she also didn’t understand — which is why it was great to have her rival, Susie, to challenge her and occasionally stand-up for the babies. And of course, there was Reptar, a cereal mascot and Tommy’s favourite toy.

Those Who Wish Me Dead (Blu-ray & Digital code)

Hannah (Angelina Jolie) is a smoke jumper reeling from the loss of three young lives she failed to save from a fire. When she comes across a bloodied and traumatized 12-year-old boy named Connor (Finn Little), the two set out together to cross miles of thick forest. Braving deadly lightning storms that challenge even Hannah’s well-honed survival skills, they’re unaware of the true dangers they face as they’re hunted by two killers (Nicholas Hoult & Aidan Gillen) while a massive fiery blaze heads straight for them.

The secret at the centre of this story isn’t entirely clear, which is perhaps because that element of the narrative is from the child’s perspective, as is the initial pursuit. Hannah doesn’t appear to have a family of her own, but she is good at luring Connor out of his shell so she can help him. He’s understandably shaken and cautious, but he takes orders very well, which is key to their avoiding the natural and human threats. Their race through a lightning storm is heart-stopping, while watching the wall of fire race towards them is horrifying. The killers have an amusing dynamic as they’re both cutthroat – once again demonstrating Hoult’s range – but have an entertaining banter that occasionally interrupts the tension. Jon Bernthal also has a small role as a sheriff and soon-to-be father caught in the middle of the chase.

When Alex Irving (Deborah Mailman), a charismatic indigenous woman, is thrust into the national limelight after a horrific domestic violence event. Australia’s embattled Prime Minister Rachel Anderson (Rachel Griffiths) sees a publicity goldmine for her party. In a bold power play, she handpicks Alex for the Senate. But Alex wants to be more than just a campaign stunt: she wants to make a difference. So, when the government’s cynical calculations betray her, Alex sets out for revenge that will send the political establishment into meltdown.

It’s obvious from the start that Alex is recruited to hopefully help the Prime Minister gain favour with the country’s Indigenous voters without actually making any concessions to them. However, even though Alex may not be a great politician, she is a stalwart advocate for the Indigenous community. One of her first acts in office is to broker a deal that will help a local community by stopping another deal from occurring. She’s also outraged to learn another young Indigenous woman died in prison and no one is being held accountable — a story rooted in real-life occurrences that weaves its way through the entire season as Alex tries to ensure justice for the girl and all those like her. The political drama remains tense, primarily because Alex’s personal issues repeatedly steer her off course, forcing her into even tighter corners.

There are no special features. (Sundance Now)

In this article:A Place in the Sun, Are You Afraid of the Dark, Blu-ray, DVD, Friday the 13th, Movie, Movie review, Nashville, Review, Rugrats, Those Who Wish Me Dead, Total Control, Tv series