Grandinetti began his magic show with a fun, interactive trick that involved audience participation and their thumbs. It was followed by him getting three random rings from fans in the audience, only for them to appear on a string in the middle of bread, which was quite impressive.

Thanks to the help of the giant televised screens at The Paramount, they made it easy and clearer for everybody to see what was going on in the stage, even for the fans that were seated at the balconies.

Equally enjoyable was his rope trick, where he was assisted by a female member from the audience. “Did you like that one?” he asked, inquiring the thoughts of The Paramount audience, and the answer was a “resounding yes.” 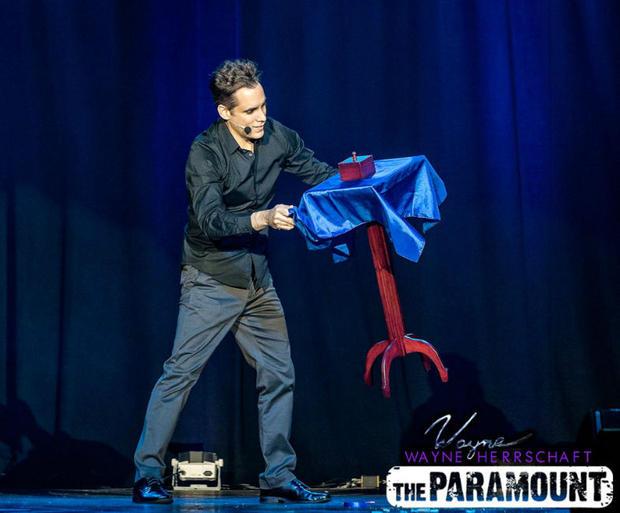 Another part of the show that left the fans spellbound involved Grandinetti making a small table float around the stage. He subsequently asked three members of the audience to add the sums of three random years (of personal significance to them together), and the answer to that sum was spray-painted in a white paper that was enclosed in a balloon. In this case, the number of that sum was correctly identified.

He incorporated a fun mentalist routine in his set, where he selected 10 random members of the audience, and correctly guessed all of the cards that they had. 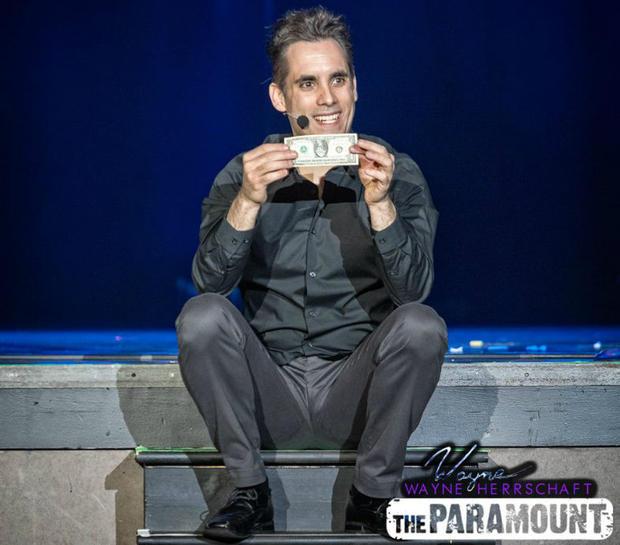 Grandinetti also did some neat close-up magic with a one dollar bill, and subsequently told a young fan to put it under his pillow tonight, where it will magically turn into a $20 bill on the following day, and the kid couldn’t have been happier.

When he took three large cards (comprised of an Ace, a King and a Queen), Grandinetti was able to tell a unique story, and if that weren’t cool enough, he was able to transform all three cards into Kings in the end, which left everybody asking: “How is this possible?” and rightfully so.

With the help of his chalkboard, he also correctly predicted the destination of a fan’s dream vacation, which was also exciting.

“You guys are excellent,” Grandinetti said, praising The Paramount audience. He continued with a purple and yellow handkerchief trick, and he invited another young fan on stage to assist him with a demonstration that involved six large steel rings.

He was able to turn tissue paper into a rose, and he correctly predicted a three of hearts card that I female audience member had in her head (where he subsequently revealed the number displayed on his arm).

Grandinetti expressed his sincere gratitude to everybody at The Paramount in Huntington for being “fantastic,” especially the staff, his female magic assistant Robyn, and the audience. He concluded with a spectacular illusion, where he was able to make Robyn float while laying on a pole.

Fan and attendee Max Hafker, age 12, remarked, “This will be the best memory I have for a long time.” Jake Hafker, age 16, added, “It’s great to follow your dreams, isn’t it? That is magic.”

Overall, Michael Grandinetti was phenomenal at The Paramount in Huntington on Long Island. He gave them a magic show to remember for a long time, and even many few skeptics in the audience in total awe. He emerged as a true wizard that commanded the stage the entire time, where his love and passion for his craft were clearly evident and appreciated by all. He deserves to be the heir to Lance Burton as the next magic superstar in the industry. His talent is top-notch, and his warm and humble personality stands out by a mile. His live magic show at The Paramount earned five out of five stars.

Read More: Digital Journal had chatted with Michael Grandinetti about his magic career.

In this article:Illusionist, Magician, Michael Grandinetti, the paramount