While some of the best remembered teen movies are comedies, some of the most resonant narratives have been dramas in which youths are forced to come to terms with some difficult aspect of living beyond the typical adolescent heartbreak. Executed incorrectly and the tale is an overwrought mess of emotions or wholly superficial. Conversely, if done properly, the film will have a lasting impact that affects and stays with audiences. Me and Earl and the Dying Girl is an exceptional example of the latter that currently stands as one of the best movies of the year.

Greg (Thomas Mann) plays it safe in most aspects of his young life. At school, he’s made acquaintances in all the major cliques to avoid being bullied by any one and generally tries to stay under the radar. At lunch, he and Earl (RJ Cyler) have lunch in their history teacher’s (Jon Bernthal) office and watch old movies. After school they film short parodies of classic movies, such as “A Sockwork Orange,” “Eyes Wide Butt” and “My Dinner with Andre the Giant.” When Greg’s mother learns his classmate, Rachel (Olivia Cooke), has leukemia, she insists he go over to her house and spend time with her, which goes against everything Greg has tried to create in his life — he doesn’t prescribe to having personal relationships, even referring to Earl as his “co-worker” rather than his best and only friend. However both Greg and Rachel are blindsided by the bond they forge during her treatment.

This is only director Alfonso Gomez-Rejon’s second feature film and considering the first was a reboot of The Town that Dreaded Sundown, one can’t help but be surprised by the emotional acuity he demonstrates in his sophomore picture. Based on a novel and screenplay by Jesse Andrews, the movie immediately captures audiences with its intriguing characters and relationships. Greg’s parents, played by Nick Offerman and Connie Britton, are peculiar; especially the tenured father who lounges at home with the cat more than he goes to work. Meanwhile, Rachel’s mother (Molly Shannon) is coping with her daughter’s illness with alcohol and awkward conversations with near strangers. 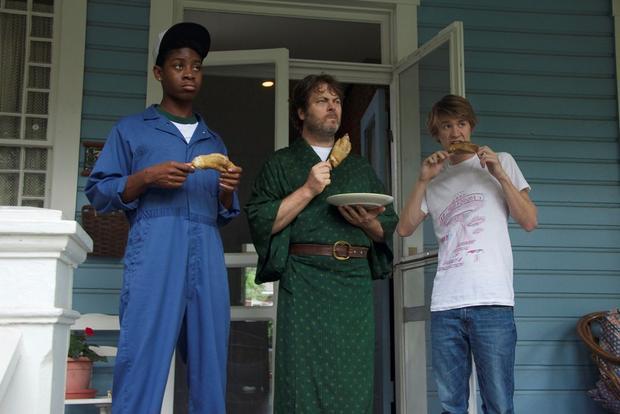 The chemistry between the three kids is incredible. Even though Greg and Earl grew up within walking distance of each other, they could not be more different. Greg is a witty, timid teen who avoids confrontation. Earl is a street smart, confidant young man who’s adopted the tough attitude of his older brother. Rachel enjoys the company of both boys, though connecting with Greg’s sense of humour turns out to be a lifeline for both of them. During their first “play date,” Greg instructs Rachel to act spastic when people make her uncomfortable about her cancer and recounts a tragic romance he once had with a pillow, all pointing to the creative mind behind the absurd movie parodies. His struggle to make a special film for Rachel is symbolic in a number of ways from its need to attain an impossible level of perfection to its expression of feelings to which he can’t put words.

In addition to the production of Rachel’s movie, the mini-movies play a major role in the story. The boys’ adaptations of acclaimed films are hilarious. There are also some great stop-motion animation sequences related to hot girls ruining Greg’s life, which involve a moose and a chipmunk who is obviously at a disadvantage.

The opening two-thirds of the narrative is very light-hearted, sweeping audiences up into this envious friendship in which Greg and Rachel find they are kindred spirits without ever falling into the sappy love story trap. But as with the best and most memorable films about illness, it eventually faces the sadder aspects of her disease that leads to yet another inspiring moment in these characters’ lives.