Underdog stories are always so appealing. Regardless of the sport or task, watching someone overcome various obstacles to prove wrong their peers and all the naysayers they’ve ever encountered can be quite inspiring. If the film is done right, the audience experiences every up and down with the character(s), and shares in their triumph when they’ve finally achieved their goal. McFarland (a.k.a. McFarland, USA) is done right.

Jim White’s (Kevin Costner) temper has prevented him from keeping any one teaching/coaching position for an extended period. After the latest incident, the only institution willing to hire him is one that has as few options as him — McFarland High School. Initially slated to be the assistant football coach, he instead discovers the town is home to some very talented runners. Negotiating with their parents and agreeing to train around the hours they’re scheduled to work in the fields, White’s hand-picked seven-man team surprises everyone when they qualify for the state championship.

If we’re being honest, it takes a pretty special story to interest viewers in watching a bunch of people run cross country — as well as skilled storytellers who understand the film must be so much more than that to captivate an audience. While the picture is about a team of underprivileged kids going to the state finals, there is a more prevalent narrative developing: Coach White redefines what is most valuable to him and a group of young men realize they can have a future beyond the fields in which their families have toiled for generations. It is these tales that engage the audience so they are invested in the outcomes of every race. Moreover, the picture focuses on only re-enacting the most significant contests rather than each one leading up to the championship. 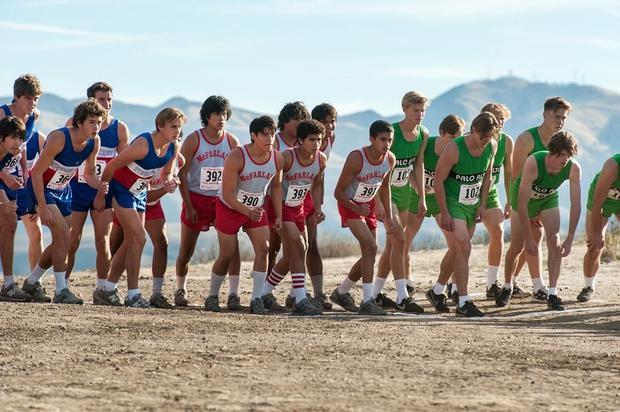 As with most stories with this many “main” characters, filmmakers must decide on which narratives to concentrate more. White is at the centre, having accepted the position in a predominately Mexican community that delivers a bit of a culture shock for him and his family. Amongst the racers there is Thomas Valles (Carlos Pratts) who assumes the role of patriarch in his home since his father is often gone for long stretches for work, and the three Diaz brothers (Ramiro Rodriguez, Rafael Martinez and Michael Aguero) who wake up at 4:30 a.m. to work in the field with their father before school and then return to it after. Until the opportunity with White arose, the only future for any of the racers was to become pickers like their fathers or end up in jail (which is conveniently located right next to their school).

All this sounds sentimental and cliché because it is; but even a traditional narrative can be told well. The trailer resembles a family-friendly version of Dangerous Minds, but the feature-length film is better than that. It hits many of the same beats because the stories are similar in a lot of ways, but this picture has much more heart; it’s more motivational than social commentary. Though it does address and challenge various prejudices about Mexicans through the course of the movie. In the same vein, it’s not heavy-handed in trying to push certain emotional moments (most of the time); instead the filmmakers trust the audience will be invested in the characters and feel those particular scenes without additional guidance.

A mixed cast of veterans and fresh faces is the perfect combination for the script. Costner loves sports movies and apparently it doesn’t matter around which sport the film revolves. He’s an excellent fit for this narrative because he can deliver the rousing speeches, make the humble statements and lose his temper with the best of intentions. The young men are spirited, charming and truly convincing of the dedication these boys had to being the best. As all of their characters were based on real-life people, one of the more rewarding parts of the conclusion was seeing most of their counterparts and learning what became of them.