It coincided with the celebration of Halloween, where fans came dressed up in costumes. It featured an opening DJ set from DJ Mike Savage. They opened their set with the up-tempo “Larger Than Life.” “Mulcahy’s,” Edvin Ortega screamed. “Are you ready to have a good time?” They immediately broke into the N Sync classic “Tearin’ Up My Heart” and a medley of hits, which included Blackstreet’s “No Diggity.”

“Are we having a good time so far?” Ortega inquired, and the answer from the audience was a resounding “woo-hoo.” “If you know this song, sing it as loud as you can,” they said, prior to tipping their hats to Boyz II Men with the soulful love ballad “I’ll Make Love To You,” which featured their velvet harmonies. 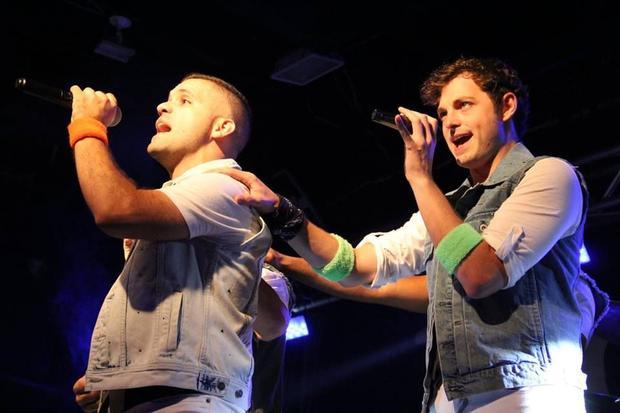 Ortega noted that tonight was the Larger Than Life take-over where they would emcee, host, sing and party it up at Mulcahy’s and the fans all night long. Ever gracious, they thanked their fans for all their love and support.

They took their fans on a trip down memory lane with “I’m a Believer,” “I Can’t Help Myself (Sugar Pie Honey Bunch)” and of course, their New Kids on the Block medley with “Step by Step” and “You Got It (The Right Stuff).” It was followed by a neat shout-out from the group to the “#powerjournalist,” which was a pleasant surprise.

Equally beautiful was their version of the Backstreet Boys’ sappy “I’ll Never Break Your Heart.” They were able to breathe fresh life into One Direction’s “What Makes You Beautiful,” and they made it sound cool again.

They also paid homage to 98 Degrees with “Because of You,” displaying their harmonies, as colored confetti drizzled into the venue.

Overall, Larger Than Life was able to put on a remarkable performance for their first-night of music devoted to themselves. The Halloween theme added to their appeal. Despite one band member being a little under the weather, nobody would have ever known, since they all sounded incredible and they showed their dancing chops. Well done boys. Their show garnered an “A.”