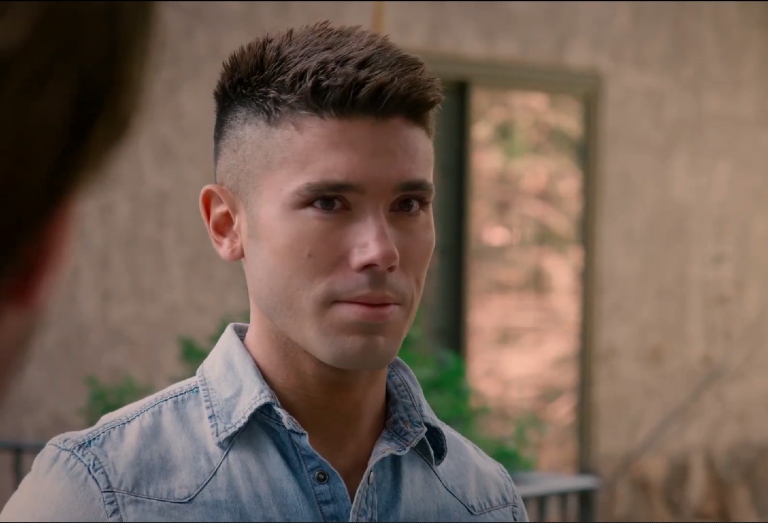 On Thursday, June 17, the film “The Killer In My Backyard,” starring Emmy winner Kristos Andrews (“The Bay”), had its world premiere on the Lifetime Movie Network. Digital Journal has the recap.

Fred Olen Ray co-wrote and directed the film. Brittany Underwood (“One Life to Live” and “The Bay”) plays Allyson, who buys a house with her fiancé Eric (portrayed by Jacob Taylor). To make ends meet, the couple decides to rent out the guest house to help with the expenses.

They are introduced to Joshua (Kristos Andrews), who arrives willing to put up a hefty rent for a short stay and appears to be the quintessential tenant, but his antics make Eric and Allyson uncomfortable, and then he puts his twisted plan into motion.

Without giving too much away, “The Killer in My Backyard” is worth checking out. It is recommended for fans of suspense, drama, and mystery.

Overall, “The Killer in My Backyard” is a compelling and edgy thriller from start to finish. Brittany Underwood displays her charm and sense of triumph as Allyson, while Jacob Taylor is solid as Eric; moreover, the entire cast soars as a whole.

Kristos Andrews, in particular, does a convincing job playing the villain and he proves that looks can be deceiving, where there is more to Joshua than what meets the eye. This role is the antithesis of his portrayal of Pete Garrett in “The Bay,” and it allows viewers to see a different side to his artistry as an actor and performer.

Andrews is able to humanize the character and he showcases Joshua’s many complex layers in a raw and authentic fashion. Andrews’ acting performance in “The Killer in My Backyard” is equal in excellence to Jacob Young’s bravura performance in the Lifetime film “When Vows Break” where both are sheer bliss.

Compliments to filmmaker Fred Olen Ray for his direction and his vision for this movie. “The Killer in My Backyard” garners two thumbs up.

For more information on “The Killer in My Backyard,” visit the official Lifetime website.

In this article:Actor, Emmy, Kristos Andrews, Lifetime, the killer in my backyard