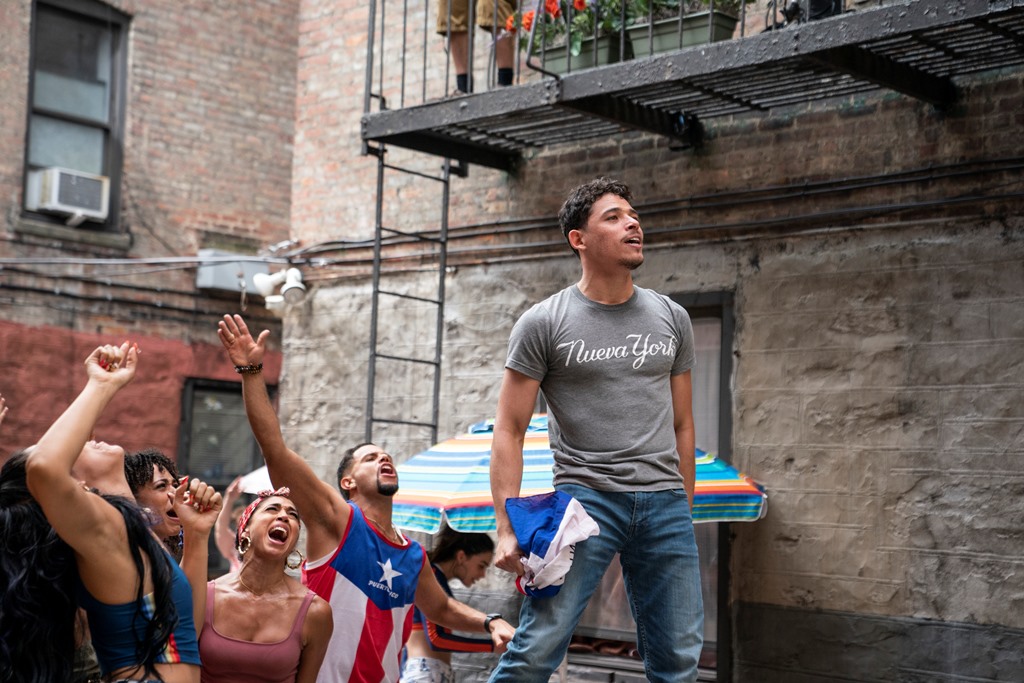 ‘In the Heights’ is a dynamic musical that tells a hearteningly universal story about figuring out one’s place in the world and succeeding on your own terms.

With the gradual return of theatrical experiences, studios are finally distributing long-anticipated films, many of which were delayed from their 2020 release dates. Pictures have ranged in genre, from animated family fun to giant action movies to a variety of horror thrillers. But after the last year, what everyone really needs is a feel-good movie that will lift their spirits and remind them of the importance of personal connections with their community. In the Heights tells the authentic story of a group of characters on the verge of significant changes in the form of a vibrant musical.

The charming Usnavi (Anthony Ramos) owns a bodega in Washington Heights, where he enjoys daily interactions with everyone from the surrounding blocks. Abuela Claudia (Olga Merediz) adopted most of the neighbourhood, but she has a special place in her heart for Usnavi, who she took in when he needed a loving home. His best friend, Benny (Corey Hawkins), is a dispatcher for the local car service, owned by the self-made Kevin Rosario (Jimmy Smits) whose daughter, Nina (Leslie Grace), is coming home for the summer after carrying everyone’s hopes with her to Stanford. The salon ladies specialize in hair and gossip, while Vanessa (Melissa Barrera) applies her keen eye to nail aesthetics as she works on her dream to be fashion designer. As the story counts down to an impending blackout at the peak of summer’s heat, these characters grapple with the next big steps in their lives.

There’s a universal quality to this story as many first-generation Americans grew-up in similar neighbourhoods, regardless of in which borough or state it happened to be located. During this film, Washington Heights is predominantly Latinx, but the evolving immigrant area was previously Irish, Italian and Jewish, which they allude to when Kevin describes purchasing his business from an Irish proprietor years earlier. And now, they’re facing gentrification as increasing rent prices push out small businesses and new enterprises charge higher rates for their services. However, they demonstrate their sense of community is not reliant on their vicinity to each other, stretching their camaraderie along the train line as certain characters follow their ambitions to new neighbourhoods.

On a more personal note, Usnavi struggles with where his home is located. He was born in America, but is building towards permanently returning to the Dominican Republic to revitalize his dad’s beach bar. He longs for “the best days of his life” when he visited the island, while his younger cousin, Sonny, is content with life in the country he knows, even if it doesn’t always feel the same about him. Nina worked hard to finally “get out” and be one of the few neighbourhood kids to attend college, but realizes being away from your block isn’t all it’s cracked to be. These are often the struggles of first-generation immigrants as they have one foot in the country their family left and the other in the country in which they currently live, or are carrying the heavy burden of succeeding for everyone who supported their efforts.

The film is a lively adaptation of the stage musical, which was adapted from a book by screenwriter and producer Quiara Alegría Hudes. The story blends Lin-Manuel Miranda‘s dynamic music and lyrics with director Jon M. Chu‘s energetic and genuine knack for storytelling to capture a world that feels simultaneously local and universal. The picture opens with the title song, which enthusiastically introduces audiences to all the local personalities and establishes the neighbourhood’s rhythmic charm. Whether singing about still unrealized dreams, secret loves or the importance of their connections and community, the performers are engaging and the dancers captivating. It very much plays like an elaborate and expanded Broadway production — complete with synchronized swimmers, dozens of dancers adept in a range of genres and a dance number on a vertical wall — which maintains the narrative’s spirit while taking advantage of the big screen format to convey it on an even larger scale. The only downside is the lack of an intermission makes the film feel a bit too long at two hours and 23 minutes.

The cast is phenomenal, including an array of unknown faces, and others familiar from the stage and screen. Most transformative and against type is Stephanie Beatriz, who portrays one of the gossiping hair stylists, as well as the beautiful, tough and emotionally-challenged Detective Rosa Diaz on Brooklyn Nine-Nine — the characters are so different, it makes her nearly unrecognizable because it’s so difficult to reconcile the two personalities in one actor. Nonetheless, the songs are catchy and set to Latin rhythms that will encourage the audience to move to the music and eventually learn the words to sing along. While the soundtrack undoubtedly tells the characters’ stories, it also stands alone as a moving album that can be enjoyed outside the film.

Everyone in this movie has a dream — “el sueñito” — and the story centres on how each character lyrically explores their heart before deciding how to pursue their goals and find their purpose.