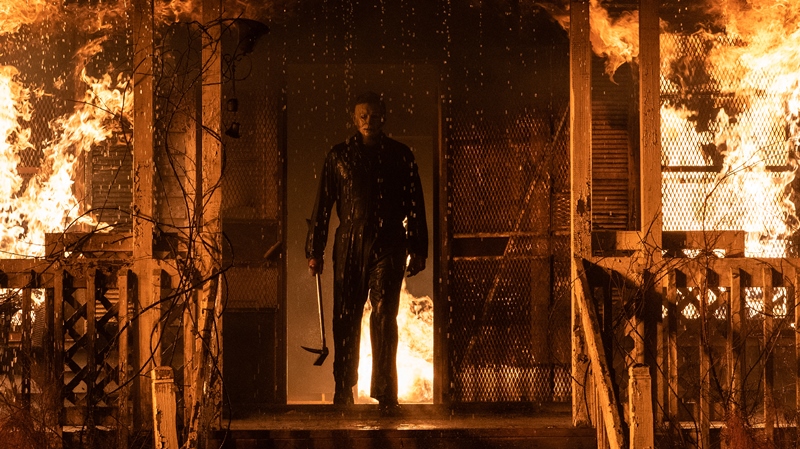 ‘Halloween Kills’ is the latest picture in the franchise featuring the masked killer and his original final girl, continuing the decades-long battle with pure, unstoppable evil.

It’s been more than 40 years since “The Shape” terrorized a small, quiet town in Illinois, killing a bunch of teenagers before finally being (briefly) thwarted by his doctor and a terrified but resourceful babysitter. His name is Michael Myers and no matter how many times they’ve tried to stop him, he always returns to Haddonfield and causes the streets to run red with the blood of the innocent. The spooky season is once again upon us and Michael is making his way home, leaving a trail of grisly bodies in his wake. Yet, Halloween Kills is different than the others.

The film picks up immediately following 2018’s Halloween. Laurie (Jamie Lee Curtis) is escorted to the hospital by her daughter, Karen (Judy Greer), and granddaughter, Allyson (Andi Matichak), believing they’ve finally put an end to Michael’s reign of terror. But they’d once again be wrong. Leaving a path of bloody corpses, he’s making his way back to his childhood home. But the survivors of his mayhem from years past aren’t having that and neither are the townspeople who just want it to be over. An angry mob forms and they are determined to kill Michael Myers… or anyone that vaguely resembles him. Finally, even though teamwork always seemed like the answer, the results are not as expected.

The opening of the film is very familiar with Laurie in the hospital after another near-death encounter with the Boogeyman. However, it goes back to 1978, revealing events that occurred shortly after his initial failed attempts on Laurie’s life. This return to the beginning is something the franchise has never really done, expanding on that first night of murder and spreading the blame for Michael’s escape. Moreover, Laurie isn’t the only character ready to face her would-be murderer. Several survivors, including her wards from that fateful night, are now grown and ready to confront their nightmare. This film comes full circle, reviving characters from the first two films, while also creating a couple of new previously untold tales about people with their own bone to pick with Michael.

Laurie takes a backseat in this narrative as the hoard — led by a now adult Tommy — takes control of the monster hunt, armed to the teeth and scouring the known locations Michael lurked, stalked and killed. Having slaughtered so many people over the decades, using a knife as his primary weapon, there isn’t a lot of ways to execute someone with a blade he hasn’t already performed. Nonetheless, filmmakers still manage to show some creativity, while also reintroducing some classics… and one unexpected misfire. Meanwhile, the lynch mob demonstrates how fear can bring out the worst in people. But Laurie brings it all home with her last act speech that describes the evil that drives The Shape and why he’s so difficult to defeat.

Director David Gordon Green returns for this second picture in the sequel trilogy, once again blending elements from the original Halloween movies (including a new John Carpenter soundtrack) and its now contemporary setting to even greater effect with the additional flashback footage. Even though this information is new, it fits the narrative and creates some new unanswered questions, as well as some very gung-ho survivors.