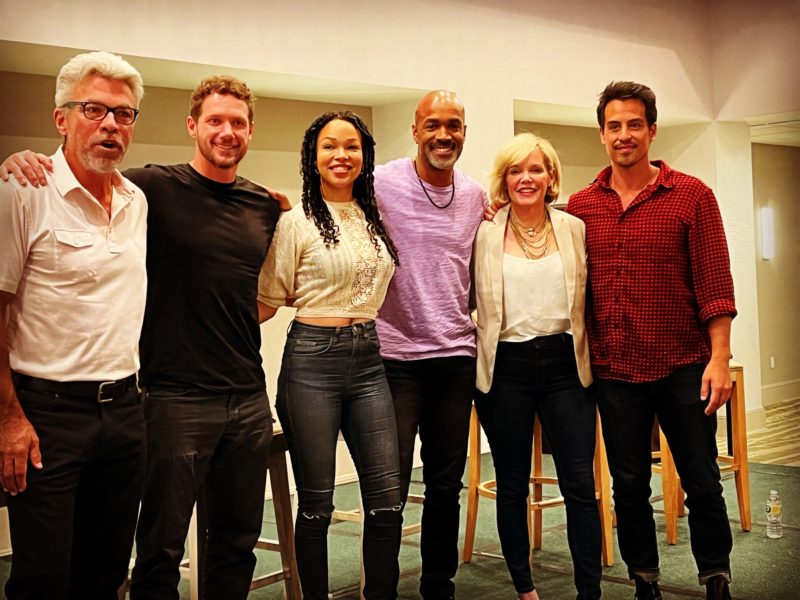 The actors all participated in an intimate Question and Answer (Q&A) session with the fans, and they signed autographs and posed for photos with them in a socially distanced fashion. They spoke about their journeys in their acting careers, and starring in the hit ABC soap opera “General Hospital”; moreover, they exclaimed about the show’s upcoming 15,000th career episode, which will air on Friday, June 17, a milestone in itself and a testament to its longevity and loyal fan-base.

Coloma was candid about the feedback that he has been getting from his storylines lately. He applauded most of his fans for being able to distinguish between a character’s actions and he thanked them for their support. Fortunately for us all, Coloma is nothing like the complex and eccentric Nikolas Cassadine that he portrays on daytime TV.

John J. York shared his strategy about how he would learn his lines when he first started doing the show in the early ’90s, which involved a little tape recorder. He would read all the lines into it and then he would read his lines. He would subsequently stop the tape and play it back, and that helped him enhance his memorization skills substantially.

Maura West acknowledged that many of her children have also been bit by the acting bug, and they are all young and gifted actors in their own right. She also noted that several of her children assist her in running lines (to help her on her dialogue-heavy days).

If he were to write, direct, and produce his own short film, Donnell Turner remarked, “I am in film school right now so this is exactly my lane. My thesis project will be a documentary on land grants, which is a better-framed way of saying ‘reparations.’ It will be expository but I want to morph it into a narrative film as well.”

To piggyback on Turner’s response, Johnny Wactor shared that he is helping a friend put together an acting reel, and he is assisting him with a short film. “The short film will be on two brothers, who recently lost their father, which is something that I recently experienced in my life. Both brothers are dealing with that in different ways. One of them is going straight and narrow, while the other brother is going the drugs and alcohol route,” Wactor said.

“I had never really written before, so in writing both of these characters, I discovered that they are both the extremes of myself. You write from your heart, what you know and what you are passionate about” Wactor added.

Kerr opened up about what she loves most about playing Dr. Portia Robinson. “I love the fact that Portia has all of the plates spinning: she has the hospital, she’s a doctor, she is a mother, she has a love life and she is keeping a solid, moral ground and home life for Trina. I love that about her and I feel that she has a lot of things boiling right now, and she is about to explode, but she is not a bad person per se. Portia has a lot of things coming,” Kerr foreshadowed.

To learn more about “General Hospital” Fantasy and their upcoming fan events, visit their official website.