“Hello, everybody, and welcome to Game of Thrones Live,” Ramin Djawadi said, and it was met with a warm response. The acclaimed composer went on to describe Madison Square Garden as a “pinch me” moment, as well as “unbelievably special.” “I hope to make this an unforgettable night for you. Let’s have fun,” he said.

The musicians on stage were expressive and their vocals were controlled and hypnotic. Pivotal scenes from Game of Thrones played on the giant televised screen as the stellar musical score by Djawadi took the viewer on a journey through the seven seasons of the show, through music.

Most impressive was the fact that a New York orchestra and choir backed his sensational band members. The show was filled with mystery, suspense, passion, and drama. The audience was blown away, especially during the “Red Wedding” and the “Battle of the Bastards.”

Djawadi shared that he writes music to pictures, and noted that he is afforded the privilege to watch the drama series before anybody else. An added bonus was seeing him play three noteworthy instruments himself: the dulcimer, electric guitar, and the Organ during the heartbreaking tune “Light of the Seven.”

Towards the end, Djawadi thanked author George Martin, HBO and Live Nation, as well as the crew (video, lighting) for putting this whole production together; moreover, he expressed his gratitude to every audience member for showing up and being a part of this musical experience with them.

Latin pop singer-songwriter Toly Rod stated, “The Game of Thrones concert was amazing. I am a huge fan and this was an experience that you definitely don’t get watching the show or reading the books. The way the music narrates the story is really special, takes you back to the story and makes you feel like if you were living it. It was also very interesting to see all the different exotic musical instruments that were used to create the intense music. As a fan and as a musician, I really enjoyed it.”

Kirschty Birt, a schoolteacher from Australia, who was present at the “World’s Most Famous Arena” for this Game of Thrones concert experience, remarked, “The Game of Thrones production at Madison Square Garden left me emotionally speechless. I was in total awe.”

Overall, Ramin Djawadi was masterful at Madison Square Garden, and the same was true for the musicians, orchestra and crew that worked on this top-notch Game of Thrones concert production. He proved that his recent Emmy win was based on sheer talent and merit. The concert was visually striking, and the pyrotechnics added to its intensity.

Djawadi’s music evoked a wide spectrum of emotions, and it was heartfelt, commanding and even, poetic at times. It is a must see for anybody who enjoys the dramatic series on HBO. Also, for anybody who isn’t a fan of the show, this concert experience will certainly immerse the viewer into the Game of Thrones world. It garnered five out of five stars. Congratulations to Ramin Djawadi and everybody involved for a job well done.

To learn more about the Game of Thrones Live Concert Experience, check out its official website. 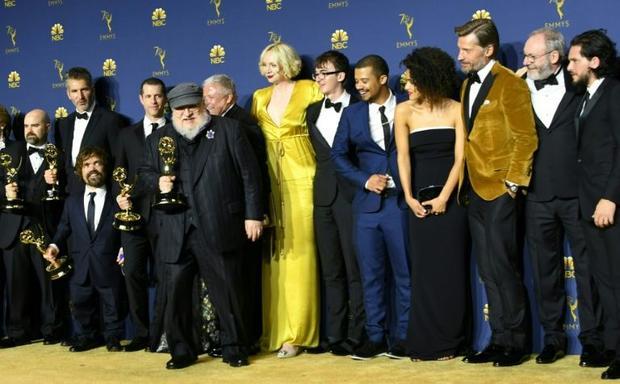 “Game of Thrones” author George RR Martin and the cast of the HBO show pose with the best drama series Emmy — the ninth for the program this year
VALERIE MACON, AFP
In this article:Concert, Experience, Game Of Thrones, Madison square garden, New York