When a lot of people think of comic books, they think of heroes — superheroes. But if you delve a little deeper you soon realize not everyone in tights and a mask is a by-the-book, easily defined “good guy.” Some of them will do anything it takes to get the job done, regardless of whether the mission is personal or professional. They are the anti-heroes of the crime-fighting universe, keeping a foot on either side of the criminal world. Deadpool is one of the most notorious personalities in this category of characters and he finally got his own movie.

Wade Wilson (Ryan Reynolds) was a mercenary-for-hire, working out of a small local bar where he met the love of his life, Vanessa (Morena Baccarin). It doesn’t get much more perfect than their relationship, until Wade is diagnosed with a terminal illness. Desperate for a cure, he agrees to an experimental treatment. The cruel therapy gives Wade remarkable regeneration abilities, but leaves him physically and unrecognizably scarred. Unwilling to face Vanessa, he creates a secret identity — Deadpool — and tears apart the city looking for those responsible for his new appearance.

It took 11 years for the movie to go from conception to screen, but “mysteriously” leaked test footage finally got them the green light. The top priority for everyone involved was to make sure it was done right — and part of that meant embracing the R-rating and not watering down Deadpool’s integrally raunchy personality and graphic fighting style, as well as his pansexuality that is subtly woven into the script. ‘Pool consistently proves he is quick on his feet both physically and mentally, showcasing improvisational skills many fans will not even be aware Reynolds possessed. Most of his best dialogue and insults are unrepeatable here, but as well as being obscene they are especially witty. He’s also very fond of pop culture references and insulting the X-Men — the franchise that provided audiences their first glimpse of the red suit — and the studio, which would seem counterintuitive… though Fox apparently took it well, having already given thumbs up to a sequel.

On top of all the traits mentioned thus far, there is one that goes even further to distinguish Deadpool from other characters: he frequently speaks directly to the audience. Either by voiceover or talking into the camera, he erases the existence of a fourth wall and treats the viewer as a friend. This is a quality carried over from the comic books, but it produces a similar result in endearing the outspoken assassin to those following his story. 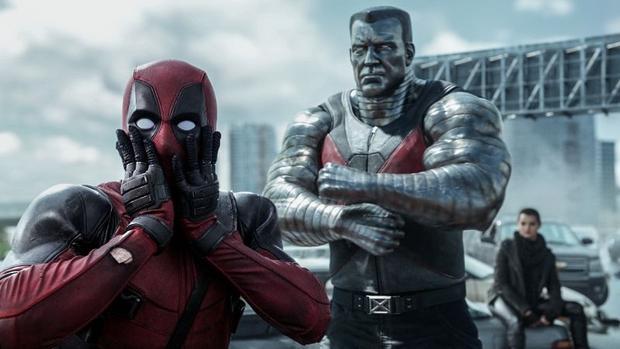 Rather than chronologically recounting Deadpool’s origin, the story begins on the way to an adrenaline-fuelled action sequence and highway chase. After a little small talk with a lovelorn cab driver, Deadpool cues up some motivational music — Salt-N-Pepa’s “Shoop” — on his portable stereo and goes to work. This crazy, off-the-wall pursuit is funny, fast-paced and bloody as he shoots and stabs his way through a succession of henchmen. In between the mayhem, he takes the time to explain how he got here in a series of flashbacks that underline the passionate love he fights for and the horrific torture he endured.

As mentioned, Reynolds surprises with how perfectly he is cast in the role of the foul-mouthed mercenary. From the flawless and casual line delivery to the exceptionally sculpted physique to the physically demanding battles, he absolutely brings it and leaves nothing on the table. In fact, at one point, he also has nothing on, fighting completely nude in a burning building without a body double. Ed Skrein takes that hit for the team, portraying Ajax, the ruthless villain and Deadpool’s nemesis, who faces off with the leading man a number of times in various states of dress. Gina Carano plays Ajax’s equally capable and more formidable partner, Angel Dust, who is often afforded the opportunity to take the lead in battle. In addition, Stefan Kapicic and Brianna Hildebrand bring X-Men members Colossus and Negasonic Teenage Warhead to the screen respectively. Deadpool is great on his own, but even more fun when he’s forced to play with others.

This film had one of the most unique and extended marketing campaigns for a movie. Reynolds has displayed absolute dedication to the role, allowing the character to dominate his own social media accounts and donning the costume for any number of photo opps and interviews. From the “12 days of Deadpool” in December to the multiple video promos and unconventional PSAs to a number of in-character interviews that are simply priceless. This bonus content not only demonstrates Reynolds’ commitment to Deadpool, but also his familiarity with the “merc with the mouth.” Even the actor’s interviews are tongue-in-cheek as he takes advantage of being one-half of a smart aleck.

This high-energy film is enhanced by a familiar, head-bobbing soundtrack that spans musical tastes and includes DMX, Neil Sedaka and WHAM! From the opening credits that uses descriptors and pictures rather than names to identify the cast to the post-credit parody that takes another jab at the studio, the film never stops making audiences laugh. At the same time, the jokes sometimes run so close together that viewers’ loud enjoyment of one quip may cause them to miss the next… or perhaps that’s just a rational excuse to see this mind-blowing movie again.