Every life consists of a series of “what ifs.” The product of any alteration can be as trivial as not missing the elevator or as monumental as a major career shift. While little can be done about the past, realizing what could have been can inspire change for the future. In Danny Collins, an aging pop star discovers a missed opportunity that causes him to re-evaluate his entire life.

Danny Collins (Al Pacino) was one of the world’s most famous pop idols about 50 years ago. Now he milks his former stardom by touring and reissuing the same old singles, and profiting from all the royalties. Then a birthday present changes everything. Danny’s manager and best friend (Christopher Plummer) gives him a framed letter from John Lennon in which the former Beatle suggests Danny call him so they could talk about collaborating. Danny immediately gives up drugs and his twenty-something girlfriend to run off to the New Jersey suburbs and write his first original song in 20 years. In addition, he considers dating someone nearer his age and attempts to reconnect with his grown son who lives in the vicinity.

The aging icon is becoming a popular theme as many of Hollywood’s greatest contributors grow older. In fact, Pacino already played a washed up stage performer trying to recapture his former glory in The Humbling. In comparison, this film is funnier and considerably lighter. When Danny decides to confront and purge his vices in an effort to reclaim what could have been, his carefree approach is very amusing particularly when dealing with his greedy girlfriend. Pacino turns on the charm and combined with Danny’s heartthrob status, he can pretty much get anything he wants from almost anyone — except the hotel manager played by Annette Bening, who refuses to go on a date with the self-assured flirt. 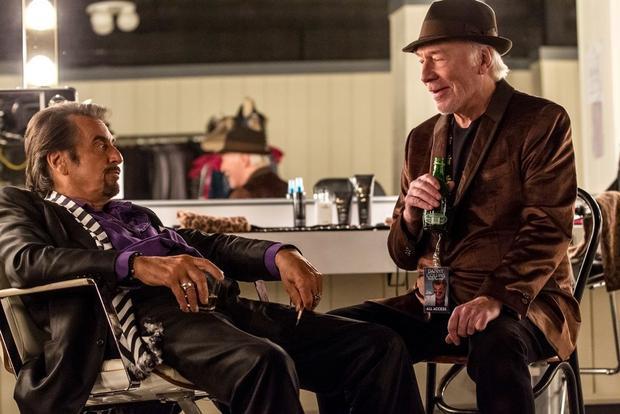 Al Pacino and Christopher Plummer in a scene from ‘Danny Collins’
Elevation Pictures
Though Danny’s attempt to rediscover his gift is stimulating, the two relationships he tries to forge after his epiphany are the most engaging. As mentioned, he spends much of the time at the hotel aiming to woo its manager, Mary. Their banter is very entertaining and gives the film a romantic comedy element that would not otherwise be present. The pair’s chemistry is unquestionable whether they’re exchanging teasing remarks or commiserating together over drinks. During his retreat, Danny also seeks to connect with, Tom (Bobby Cannavale), the now-adult son he ignored his entire life. Tom is a mixture of bitter and indifferent. However, Danny is not easily discouraged. He realizes Tom’s family could benefit from his notoriety so he insists on helping them, demonstrating his commitment to being a supportive grandfather by ensuring his granddaughter attends the best school that suits her needs and eventually getting the opportunity to be there for Tom when he’s needed most.
Advertisement. Scroll to continue reading.

Dan Fogelman has written several star-studded dramedies, but this is his first time in the director’s chair. This style of narrative is undoubtedly one in which he’s comfortable and he’s casted a group of exceptional actors, which together make his debut behind the camera relatively straightforward. Consequently there’s nothing ground-breaking about this film, but it is enjoyable.