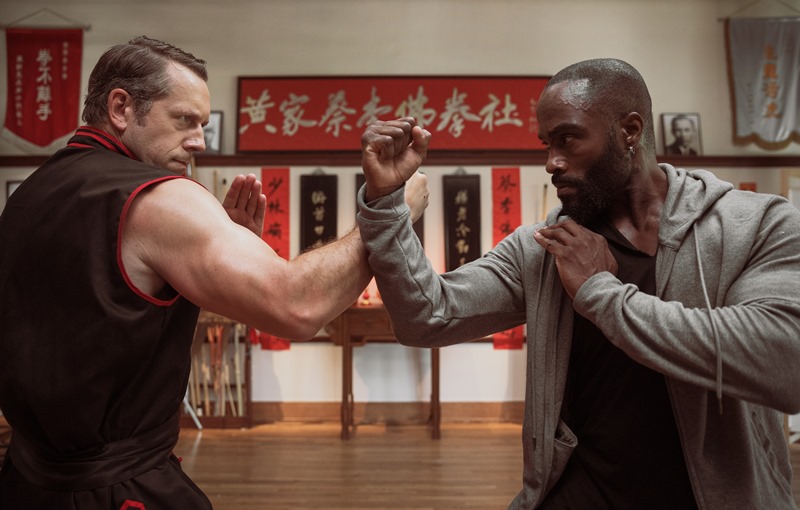 This week’s releases include a murder investigation with no clear answers; an underappreciated martial arts comedy; some steelbook classics; childhoods long past; and a movie of irredeemable characters.

A shocking crime rocks a small Massachusetts town and one family, in particular, forcing an assistant district attorney (Chris Evans) to choose between his sworn duty to uphold justice and his unconditional love for his son (Jaeden Martell).

This series’ greatest accomplishment is its ambiguity around the crime at its centre. The horrific murder of a teenager has more suspects and motives than should make anyone comfortable. However, it’s this chaotic adolescence that makes for such an intriguing mystery. Each episode reveals more clues and plausible doubt, frequently shifting suspicions and never seeming to get closer to the truth. Evans delivers a great performance as a father forced to the sidelines of his son’s defence, even though he has the background necessary to help him. However, the best and most important portrayal is given by Martell, who’s connection or lack there of to the murder is what the entire narrative rests on — and his ability to keep audiences guessing.

High-schooler Ferris Bueller (Matthew Broderick), his girlfriend Sloane (Mia Sara) and his best bud Cameron (Alan Ruck) are off on the spontaneous romp through Chicago.

Even though John Hughes didn’t direct all of the films he penned, he became the voice of the ‘80s because of his ability to capture realistic, relatable characters. This movie was centred on the fantasy of a perfect day away from the pressures of school, parents and college admissions. There are no social hierarchies to navigate — just an astoundingly determined principal and spiteful sister stand in their way of the greatest cut day in teen history. From ridiculous disguises and diversions to implausibly starring in a street parade to being the topic of countless strangers’ well wishes, Ferris literally does it all on this exorbitant day. The film became a pop culture staple and household name with most still recognizing the reference, “Bueller? Bueller?”

Special features include: making-of featurette; “Getting the Class Together”; “Who is Ferris Bueller?”; “The World According to Ben Stein”; “Vintage Ferris Bueller: The Lost Tapes”; and “Class Album.” (Paramount Home Entertainment)

Here are the Young Men (Blu-ray)

The film catalogs the last hurrah of three high school graduates intent on celebrating their newfound freedom with an epic, debaucherous bender. However, when a horrible accident sends them spiraling, the trio must grapple with the most daunting challenge of their lives: facing their own inner demons.

This movie is just a procession of depravity as these teens embarking on adulthood go out of their way to be menaces to society. An endless supply of drugs and alcohol are present, but they’re behaviour goes far beyond being under the influence — especially when many of their troublesome acts are committed sober. Kearney (Finn Cole) is the trio’s bad seed, leading his friends down a path of destruction — both internally and externally. When not under Kearney’s influence, Matthew (Dean-Charles Chapman) is a decent kid and a nice boyfriend. But their unhealthy friends’ dynamic finds a way to ruin everything. With few to no redeeming qualities, watching the characters throw their futures away provides little entertainment.

There are no special features. (Well Go USA)

Elitist linguistic professor Henry Higgins (Rex Harrison) makes a wager with his colleague that he can turn a sassy, cockney flower girl Eliza Doolittle (Audrey Hepburn) into the toast of English society. The musical includes timeless songs such as “The Rain in Spain,” “I Could Have Danced All Night” and “Get Me to the Church on Time.”

The name Eliza Doolittle was immortalized by this movie and people undoubtedly know some of the songs as they’ve appeared in countless other narratives; but many viewers may never have seen Hepburn’s dazzling performance as a flower girl from the street transformed into an impeccable socialite. Her accent pre-elocution lessons are incomparable, particularly when she’s forced to adapt it to the speech classes before it magically disappears. Hepburn definitely deserved the recognition, but she would not win one of the film’s eight Oscars; they did however take home statues for best picture, actor and director. This anniversary edition has a shiny magnetic case and includes a disc devoted to special features, including an hour-long video examining how the movie was made, a look at the spectacular costumes and Hepburn’s accent tests.

As teenagers, kung fu disciples Danny (Alain Uy), Hing (Ron Yuan) and Jim (Mykel Shannon Jenkins) were inseparable. Fast forward 25 years, and each has grown into a washed-up middle-aged man seemingly one kick away from pulling a hamstring — and not at all preoccupied with thoughts of martial arts or childhood best friends. But when their old master is murdered, the trio reunites, soon learning that avenging their sifu will require conquering old grudges (and a dangerous hitman still armed with ample knee cartilage) if they are to honourably defend his legacy.

This movie flew under the radar, gaining very little attention in spite of its engaging mix of action and humour. Beginning with a classic teen, kung-fu montage, their younger selves prove to be skilled martial artists able to takedown any opponent. However, something caused a rift between them, including their sifu, that led to them not speaking to each other for decades and leaving most of their training in the past. Now, they’re out of shape, middle-aged men, living mundane lives full of compromises they never thought they’d make. Their quest for truth leads to hilarious bouts with up-and-coming martial artists, as well as an old foe who revels in his newfound superiority. Their hunt for their master’s killer also becomes a search for themselves and how to reincorporate their former values into their lives. In spite of an ending that feels somewhat out of sync with the rest of the movie, it’s surprisingly entertaining and a highly recommended watch.

Andie (Molly Ringwald) is a high school girl from the other side of town. Blane (Andrew McCarthy) is the wealthy heartthrob who asks her to the prom. But as fast as their romance builds, it’s threatened by the painful reality of peer pressure.

Even though John Hughes didn’t direct this picture, his signature brand of teen angst is all over the script. The school is divided into “richies” and everyone else, who are primarily made up of poorer kids with a unique sense of fashion. Not surprisingly, the former bully the latter with Steff (James Spader), king of the richies, leading the charge. However, his best friend, Blane, is drawn to Andie, and the pair are willing to look past their social divide and give dating a try. Their friends, on the other hand, have opposing opinions. This picture is a staple of the ‘80s teen genre with its over-the-top clique wars and Duckie’s (Jon Cryer) passionate lip-sync to Otis Redding’s “Try a Little Tenderness.”

When a reckless young gambler’s wild lifestyle of illegal betting, drag racing, and brutal street fights pits him against a ruthless criminal enterprise, his luck finally runs out. The gang shows up at his father’s home to collect on the debt, forcing his family to fight in order to save their land — and his life.

The story for this movie is very thin. The gang attempts to settle the son’s debt by usurping his family’s land. However, his sister will have none of it. She’s far more responsible and capable than her brother, and she’s determined to save their home and her no-good brother’s life. There are a lot of fight scenes choregraphed throughout the picture, but each has interesting differences whether it be location or choice of weapon. The film would have been more engaging if they’d incorporated some character development. Instead, everyone feels very anonymous regardless of which side of the fight they’re on, making it difficult to root for one or the other… even if audiences will undoubtedly side with the family who are victims of the son’s black sheep behaviour.

There are no special features. (Well Go USA)

Come hang out with Charlie Brown, Snoopy, Linus, Lucy, and the rest of the Peanuts gang in the four, original feature-length movies, for the first time ever in one Blu-ray collection! First, sound out l-a-u-g-h-s at the National Spelling Bee with the very first Peanuts movie, A Boy Named Charlie Brown. Next, go searching for Snoopy’s secret past in the hysterical Snoopy, Come Home. Then, making their Blu-ray debuts — Race For Your Life, Charlie Brown, full of camp-style fun, and Bon Voyage, Charlie Brown (And Don’t Come Back!!), jetting the gang off to the French countryside.

These classic movies capture everything that was charming about the Peanuts crew. In the first movie, poor Charlie Brown is feeling characteristically dejected. Unable to win at little league, he tries his hand at the school’s spelling bee with the support of Linus and his blanket. In the meantime, Snoopy is haunted by strange dreams of the Red Baron. The next movie actually centres on the little white beagle and a past no one knew existed. The camp movie presents an unwelcome change in scenery for the kids who have difficulty adapting to the strange schedule. Viewers are treated to beautiful animated scenery during the river rafting race that brings out the best and worst in their team leaders. Finally, the Peanuts gang heads to France on an exchange program that leaves Charlie and Linus in someone’s backyard, and Patty and Marcie vying for the attention of their French host. Nothing ever goes as planned for these kids, but they always make it work in the end.

A young tomboy, Watts (Mary Stuart Masterson), finds her feelings for her best friend, Keith (Eric Stoltz), run deeper than just friendship when he gets a date with the most popular girl in school, Amanda, (Lea Thompson). Unfortunately, the girl’s old boyfriend, Hardy (Craig Scheffer), who is from the rich section of town, is unable to let go of her, and plans to get back at Keith.

One of the things John Hughes was so adept at capturing on screen was the complex dynamics between friends, particularly those of the opposite sex. In most of these relationships, one friend is burdened with unrequited feelings for their best friend, which complicates their platonic intimacy — particularly, when a new romantic interest enters the scene. For a tomboy to be considered an eligible woman fit for dating by her guy friend is not always easy. Watts may act like “one of the boys,” but that doesn’t mean she doesn’t also have emotions and desires like the other girls — something Keith painfully fails to recognize. Watching him remain oblivious to the pain he’s causing Watts can be difficult to watch. Still, there are inevitable moments of romance, whimsy and revealing banter.