Wrangled is Angaleena Presley’s follow-up to her 2014 solo debut, the critically acclaimed American Middle Class. Released by Thirty Tigers Records, the new album not only reunites the feisty 40-year-old with her Pistol Annies cohorts, Miranda Lambert and Ashley Monroe (the trio wrote the opening track, “Dreams Don’t Come True”), but also includes “Cheer Up Little Darling,” the last song the great Guy Clark worked on before his death in May last year.

The above-mentioned “Dreams Don’t Come True” gets the proceedings under way nicely, its dream-like vocals drifting over a mournful steel guitar and hazy Telecaster, before second track, the wrly-observed “High School,” chimes in with its irresistible 1950s-style groove.

Co-written with Chris Stapleton (Presley had a hand in all of the 12 tracks), the traditional country lilt of “Only Blood” is a wonderful duet with Stapleton’s wife, Morgane, though the subject matter is quite dark. The title track is another winner, even if it doesn’t quite match the brilliance of the first three songs. “Bless My Heart” also displays Presley’s quirky sense of humour and features some amusingly ‘downbeat’ yodelling.

The Kentucky-born star has always come across as a likeable and dynamic presence – presenting an often tongue-in-cheek ‘outlaw’ attitude towards country music in the process – and the song “Outlaw” (one of three tracks she wrote by herself) is delightfully catchy in its apparent rejection of the label.

“Mama I Tried” cleverly manages to incorporate the famous guitar lick from Merle Haggard‘s “Mama Tried, which was allegedly the first song Presley ever learned to play on the guitar, at the age of 15. 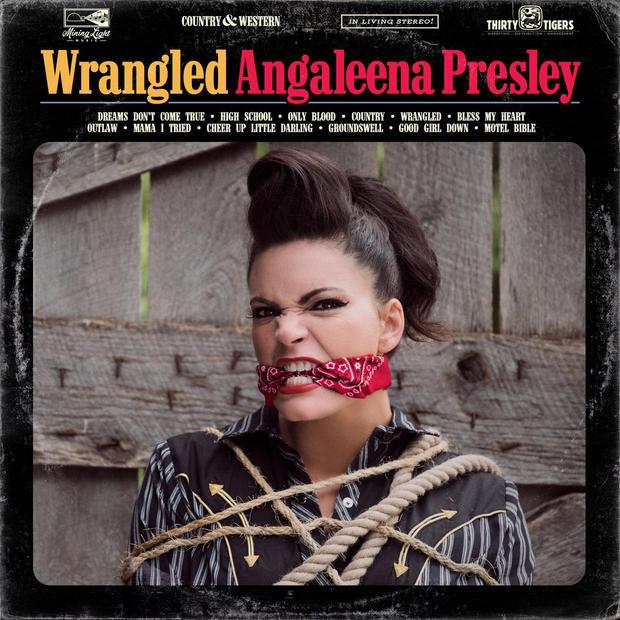 Angaleena Presley
Claire Horton PR
The beautiful “Cheer Up Little Darling” was co-written with Guy Clark and, as mentioned previously, was the last piece the legendary Texan tunesmith worked on before his passing. That gift for melody and rhythm that Presley possesses once again comes to the fore on “Good Girl Down,” a song with a defiant message.

Wrangled is a worthy successor to American Middle Class and will surely go down as one of the top traditional-leaning country albums of 2017.

Wrangled will be available from April 21. For more information on Angaleena Presley, visit her official website.