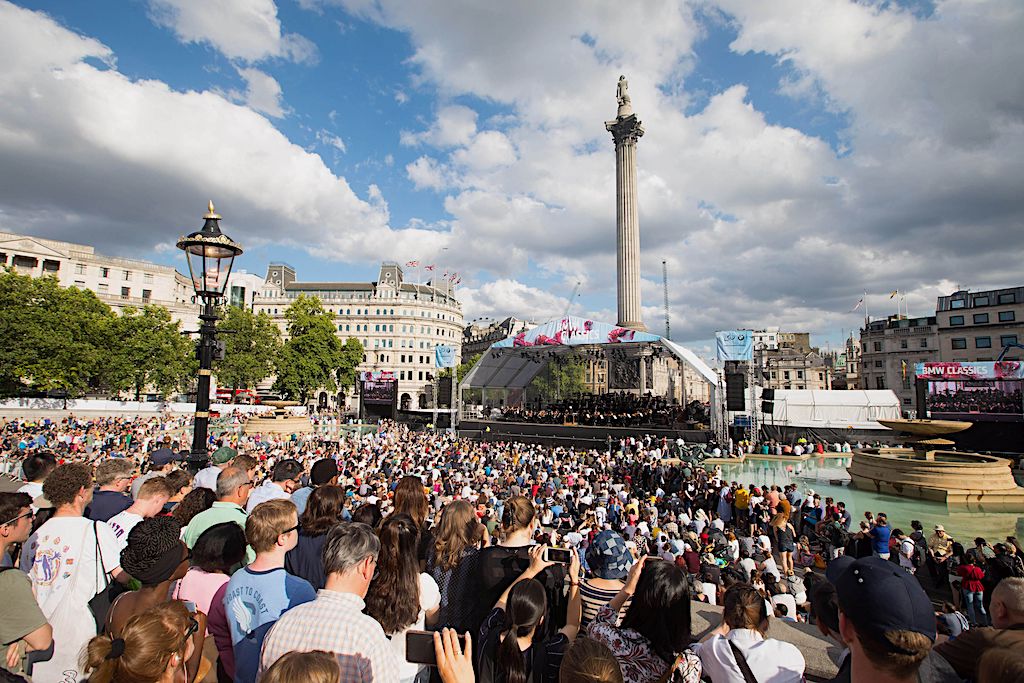 London’s Trafalgar Square will be enriched in a cacophony of sound, designed to mark the height of summer and (hopefully) to mark the easing of coronavirus lockdown restrictions. The musical extravaganza will be led to the distinguished conductor Sir Simon Rattle together with the world renowned the London Symphony Orchestra.

Trafalgar Square is a fitting venue in London. It is at the heart of Greater London and a popular place for licenced events, as well as being the main congregation  point for protest marches and less official gatherings. The square marks the Battle of Trafalgar, the British naval victory in the Napoleonic Wars and it has been so-named, replete with a 52 metre high column depicting a statue of Admiral Horatio Nelson, although there has been a space for congregating in this region of London since the 13th century.

The concert will take place on Sunday 15th August. As well as the magnificence of the London Symphony Orchestra, the musicians will be added to by young musicians from the LSO East London Academy together with 14-year-old violinist Leia Zhu, for whom there has been much interest within the world of classical music. For those wishing to gain a preview of Zhu’s virtuoso style, check out this video clip.

Zhu will be the soloist for Saint-Saëns’ violin showpiece “Introduction and Rondo Capriccioso”. The piece is a composition for violin written in 1863 by Camille Saint-Saëns, and dedicated to the virtuoso violinist Pablo de Sarasate.

The program also features music on a theme of dance and ballet. Included on the bill is Dvořák’s lively “Slavonic Dances” (a series of 16 orchestral pieces), and Tchaikovsky’s perennially popular “The Nutcracker” in addition to the first live performance of Ayanna Witter-Johnson’s much anticipated “DreamCity”.

The conductor, Sir Simon Rattle, rose to international prominence as conductor of the City of Birmingham Symphony Orchestra in the 1980s. He has spent a long tenure with the Berlin Philharmonic and he is currently music director of the London Symphony Orchestra. Characterised by his cloud-like hair, he is regarded as one of the world’s leading conductors.

Ayanna Witter-Johnson is an English composer, singer, songwriter and cellist. Her music is genre-defying, cutting across the spectrum of jazz, classical, soul and blues music.

Speaking about the event, Sir Simon Rattle comments: “I am delighted that the musicians from the LSO East London Academy are joining us on stage, along with the soaring talent that is Leia Zhu. These young people are the future and it is awe-inspiring to see their talent develop, and share their gifts with the crowd in Trafalgar Square and on YouTube.”

The event is hosted by the German car manufacturer BMW, under its ‘Classics’ series, in conjunction with London’s Labour Party mayor, Sadiq Khan.  This is the 10th staging of the concert, with the event cancelled during 2020 due to the coronavirus pandemic.

The concert begins with the first bow being drawn across a violin, at 6.30 p.m. For those unable to attend the festivities, and for readers around the world, the concert will be broadcast via a live stream on YouTube. The YouTube link has yet to be issued, interested readers should check the BMWBlog for updates.