Something of a child prodigy, AraDona (his real first name is Ara – ‘Dona’ was his grandmother’s name) began his art education at the age of 15. He was subsequently awarded a full scholarship with Disney Imagineering and also studied Traditional Art on the Herbert Ryman Scholarship program.

While still a teenager, the accomplished oil painter was already working on portraits commissioned by parents and teachers. During his senior year at Glendale High School in California, he began selling paintings and in recent years a number of celebrities have purchased examples of his early work. 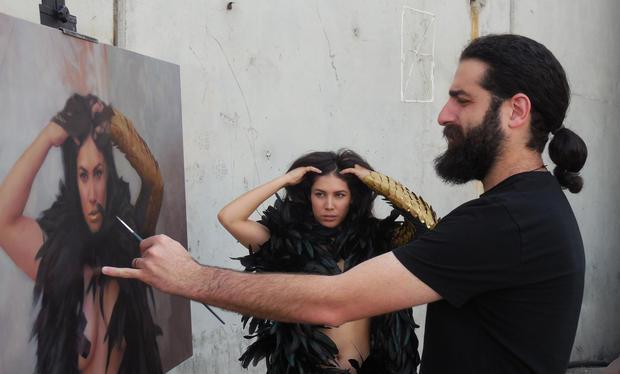 After graduating high school Ara went to Italy, where he studied classical drawing and painting at the Florence Academy of Art. Three years later he graduated from the academy and returned to the States to continue his career as a portrait and figurative painter.

“I am doing great, thank you,” says the man himself when asked about his general well-being. “I’ve been painting about 15 hours a days for the past few months and am currently working on three large paintings at the same time. It’s very refreshing and keeps me very active.”

AraDona will soon be the featured artist at the grand opening of a new gallery located at the forum shops at Caesar’s Palace in Las Vegas. “I am very pleased and excited to be able to work with the SKYE Art Gallery, owned by two fascinating ladies, Vanessa Juarez and Elena Voskresenskaya,” he enthuses.

“I was also very honoured to hear that David Tupaz will be designing a special dress for the grand opening for me to paint. His fashion is so inspiring and as an artist I couldn’t ask for more; painting a very stylish gown dressed by a haute couture designer – on a model!”

Ms. Juarez is also very keen to work with Ara and had this to say: “I am very excited for the grand opening of the gallery because Art will meet Fashion. This event will be a prelude to what’s to come in the next few months in AraDona’s new collection. This is a very important event because it will mark AraDona’s new career direction and I am looking forward to joining him on this new journey.”

Asked to describe what it is that first got him hooked on portrait painting, the former martial arts champion (he won his first world title in Las Vegas at the age of 13) states, “There are many things about the portrait that inspire me…

“One of the things is telling a story through the portrait by the way colours appear on the face – the different colours and half-tones that create certain expressions and lighting effects, before I’ve even painted the background. I am discovering their individual story using the uniqueness of each feature and expression they possess.”

Recalling some of the famous names who have sat for him, the husband of respected Swedish artist Julia Stjernstrom remarks, “I’ve had the pleasure of working with many celebrities and well-known socialites in Beverly Hills and Dallas, and I really enjoy working with each and every one of them.

“Celebrities and philanthropists I’ve painted include Ruth Buzzi, Ruta Lee, John Schneider, Barry Corbin, Dom DeLuise and Caroline Rose Hunt. As far as who I would like to paint, that list is huge. But to name a few, Madonna, Jennifer Lopez and Jeremy Irons.”

Interestingly, it was the above-mentioned actor, the late Dom DeLuise, who Ara credits for ‘discovering’ him and helping him on his way. “I met Dom when I was 17,” he recalls. “I would always visit him during my summer breaks from Florence and he introduced me to many wonderful people. One of them was Ruth Buzzi and her husband Kent Perkins.” 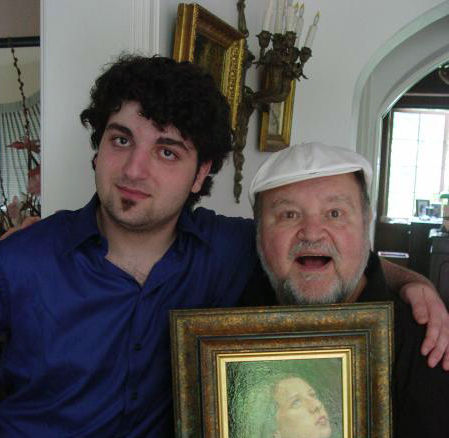 I was curious to learn more about the name ‘AraDona’ and the woman who had such a profound influence on him. “Dona was my grandmother’s name… She inspired, encouraged and supported me to became a portrait and figurative artist, so I decided to carry her name throughout my artistic journey.”

To learn more about AraDona, visit his official website.

The SKYE Art Gallery Grand Opening will take place on March 26 from 6 p.m. For more information, go to their official website.