“My character means well. He actually thinks he’s doing what’s right for America. But he’s just so poorly informed.” That’s Stephen Colbert talking about the other Stephen Colbert, the latter a patriotic God-fearing book-burning talk show host helming The Colbert Report on Comedy Central. Viewers have come to expect Colbert to be ignorant and boorish, but he’s far from dumb. In fact, both the fictional Colbert and the actor are incredibly smart in reeling in publicity and a legion of followers who do their bidding.

The most recent example is startling: Colbert’s fans, dubbed “the Colbert Nation”, became the official primary sponsor of U.S. Speedskating once its main sponsor hit the road. They raised $250,000 for the Olympic team, and Colbert’s been milking his sponsorship on his nightly show. He’s planning to attend the Vancouver Olympics.

His rise to athletic fame inspired Sports Illustrated to slap Colbert on the cover of their recent issue. Decked out in a speedskating suit, the copy reads: “Stephen Colbert and his nation save the Olympics.” Let’s see Jay Leno pull that off.

Thing is, Colbert has been amassing his followers since he began spreading “truthiness” to all corners of the world. He instructed the Nation to change a Wikipedia entry on elephants to state their population had tripled in the last six months. Last year, he issued a “green screen challenge” for video mavens to repurpose a John McCain speech to “make him see interesting.” And in his most bold real-life infiltration, the satirist asked his fans to vote for him to be named on a new NASA space module. It worked — NASA named a treadmill in the Space Station after Colbert.

His call-for-action directives are not the only moves that make Colbert a media maven. He aired several shows from Baghdad, where he performed his liberal shtick in front of hundreds of soldiers. Colbert — the real one — admits his devotion for the soldier-boy cause, so much so he allowed his hair to be shaved. Live! Now that makes great television.

He’s won street cred by chatting with some impressive and thoughtful celebrities, such as Arianna Huffington, Malcolm Gladwell, Al Gore and Matt Taibbi. He successfully appeals to younger generations by inviting guests such as Snoop Dogg, the Flaming Lips, Feist and Will Smith. Always playing the jerk, Colbert somehow endears himself to these guests, turning an otherwise drab one-on-one to an entertaining exchange. 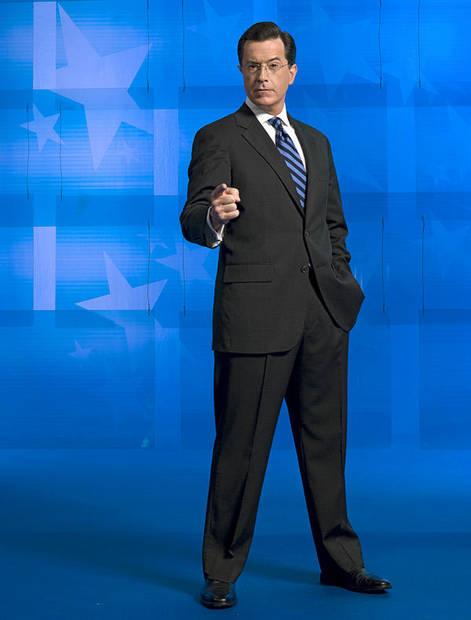 As Wikipedia describes, Stephen Colbert is an American comedian, satirist, actor and writer, known for his ironic style (particularly in his portrayal of conservative political pundits), and for his deadpan comedic delivery.
Photo courtesy Comedy Central

Last week, Colbert invited soul singer Alicia Keys to rock the stage. But he leapt into her set as well, busting a few rap lyrics and providing decent backup vocals. His lyrics on suburban living in NYC weren’t all that bad (“Home theater system, 60 inch plasma/ Clean suburban air, much better for my asthma”) but more importantly, he pulled off this foray into rap flow as easily as he slips into his Bill O’Reilly persona.

I’ve always thought Colbert to be more than a comedian, more than a talk show host. He understands social media, he knows how take advantage of user-generated content and he invites guests who actually have something to say (and not always something to plug). That’s the kind of marketing genius only a few can pull off.