There’s good reason why the Weinstein Company picked up Sarah’s Key this week for US distribution. It’s a Holocaust story unlike any other, as those who read the book can attest. Practically every scene is soaked in emotional depth. No shallow plot or dialogue here.
We begin in Paris, 1942. Sarah Starzynski (Mélusine Mayance) is 10 and begins to fear for her family’s life when the French gendarmes, supposedly under order from the Vichy government and Nazi occupiers, round up Jewish families and imprison them in the Vélodrome d’Hiver. We see the inhumane conditions in this cage, described later as “the New Orleans Superdome during Katrina times a thousand.”

But before the Velodrome chaos, Sarah told her four-year-old brother Michel to hide in a bedroom cupboard, a secret hiding place. She tells him she’ll return for him, holding the cupboard key close to her heart.

But when Sarah and her family are then sent to transition camps, she begins to panic. “I need to get Michel!” she cries out (in French, of course, the film is partially in subtitles). She becomes so desperate she escapes from the camp with the help of a softened French guard.

Between these historical montages, we are shuttled back to modern day France and the life of Julia Jarmond (Kristin Scott Thomas). As a journalist she has been assigned to write a feature piece on the Vel’d’Hiv roundup of 1942 and she stumbled upon Sarah’s story due to her own personal circumstances (don’t worry, no spoilers here). What follows is Julia’s determined quest to find out more about Sarah and her current whereabouts, even if it means sacrificing family and friendships. 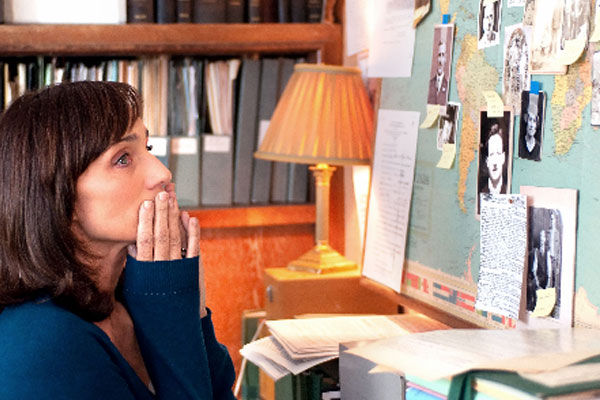 The first half of Sarah’s Key grabs you by the lapels and doesn’t let go. You’re sucked into the degradation these French Jews faced at the hands of their own police, and you can almost smell the horror reeking off their skin. The Holocaust-era scenes features Sarah’s pleas to see her brother, a motivation that drives the story forward.

The 2010 scenes feel quite jarring compared to the 1942 story, but perhaps that was director Gilles Paquet-Brenner’s intention: he wanted us to appreciate the 21st-century conveniences compared to the degradation Sarah’s family faced during World War II. Our sympathies immediately turn to Sarah, though, and rarely remain focused on Julia’s own mini-troubles.

As Julia, Thomas wins us over right from the beginning. Her earnestness is almost addictive — we also want to find out about Sarah, and we’re anticipating if Sarah will eventually rescue Michel. Thomas has always been careful to pick smart roles, so we’re glad to see her select a truly powerful character who becomes a hero and detective, rolled into one.

Where did the precocious Mayance come from?! This young actor carries each scene with such presence she practically deserves an Oscar for her talent. Let’s hope Hollywood gives her more roles in the future (and no, not the Kick-Ass kind).

Sarah’s Key will likely be compared to other Holocaust films, notably Schindler’s List. But it’s on a different level and blends present-day investigations with WWII-era conflict. It’s practically seamless, and the mystery only deepens as the film progresses. A definite winner at TIFF, Sarah’s Key will be an art-house darling once it reaches more theatres later this year.

Sarah’s Key is one of many films DigitalJournal.com reviewed during TIFF. Read our other reviews: Casino Jack, Conviction, The Trip, Blame, Bad Faith.