Apart from the religious aspects, Randall pointed out. “The concept of the Mass is an intensely personal thing. Its focus is entirely on humanity, and on our universal desire to make peace with our deepest fears and insecurities. Though the text is designed to speak to a higher power, he said, it’s littered with phrases like ‘have mercy on us’ and ‘grant us peace’ all of which concern human struggles and can resonate with us on a deep level.”

Local liturgical music composer and orchestrator Rev. Vincent “Ricky” Manalo was pleased when he heard the news of the upcoming debut. He has frequented St. Mary’s Cathedral on Geary which is only a few blocks from St. Mark’s where Randall will be performing. A graduate of the Theological Union at Berkeley, Manalo specializes in liturgical music and its history.

As a member of the clergy Rev. Manalo explained, “there is a long tradition of this (use of the sacred) in Western music.” Yet as a person of faith with religious affiliations, he expressed some reservations. “In the context of a concert, music is for the sake of music if fine,” he said. But in the sacred space “however, one needs to pause when it comes to other way around, such as concert music that is sung in liturgical contexts.”

He noted that “during liturgical events, music is not for the sake of music, but for the sake of the liturgy.” As one who also presides and celebrates liturgy, Rev. Manalo said that The Mass in its religious context has a special place; “specifically the principles of liturgical music that emerged during and since the Second Vatican Council.” Currently a lecturer at Santa Clara University, Manalo said, The guidelines for the faithful are clear. “Does the music help lead the assembly – congregation towards a full, conscious and active participation? Is the music wedded to the ritual action (and to its meaning?)”

Randall understands the sacred and recognizes Rev. Manalo’s concerns. “I’ve done a lot of choral singing in churches on the east coast (especially at the Memorial Church at Harvard),” he said. From those experiences Randall noted that he had the privilege of encountering so many great and really diverse settings. These he said “influenced the way I approached writing my own music.”

Randall explained further. “Masses are unusual in the musical tradition because they began as something purely religious and wandered at times into something almost purely musical. Because of this the text (of the words sung) has a certain duality of purpose. The words are powerful when set to music, but the point is really the music itself.”

Despite what some people in religious circles may think is crucial, Randall stands by his Mass as a musical composition. “Because a mass can be perceived in both religious and musical contexts, he explained, it has to stand alone as a piece of music in and of itself even as it sets the words in a way that brings out their meaning.” “There has to be some deeper point to the music, he said, a fundamental musical idea that drives the entire piece. And, it provides not only insight into the words, but a glimpse of something that exists beyond them. That’s one of the main things that drew me to the idea of writing a Mass,” he said.

So far, the bits and pieces he has performed informally has been well received. He praised the San Francisco Conservatory musicians who worked with him to help bring his Mass to life. And, he was grateful that an audience liked his work. “Really, I’m most interested in whether listeners like to listen to my music and whether musicians like to play it. So, hearing great things from both musicians and audience members afterward (during those small gatherings) was really encouraging.” 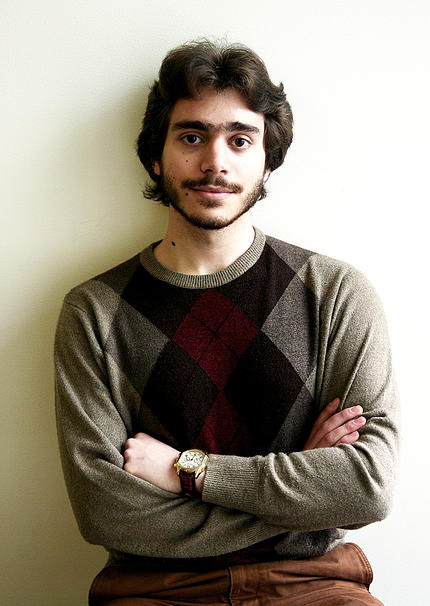 Born and raised in the forests of New Hampshire, composer Kyle Randall began his composition career in front of the piano at age ten. He has composed prolifically ever since; writing in a wide variety of genres encompassing concert music. From film scores, dance suites, musical theater, to electronic music, jazz, and alternative rock. Randall’s compositions have been performed across the country and abroad, in such venues as Carnegie Hall and La Schola Cantorum in Paris. He is pleased to now be
Courtesy of Kyle Randall
Advertisement. Scroll to continue reading.
His teachers at the Conservatory are impressed and pleased with his work. Among them is David Garner, also a composer. He has been a faculty member of the Conservatory for over 20 years. Garner had this to say about Randall.
“Kyle is highly disciplined and well-prepared. He did his undergraduate at Harvard, and it is unusual for an Ivy Leaguer to wend his way west. He has been an asset to the department, helping with many extramural activities and events.”

Randall’s music has been performed across the country and internationally, from New York’s Carnegie Hall to La Schola Cantorum in Paris. His work has received such awards as the Francis Boott Prize for Choral Composition, and he was recently announced as a finalist for the prestigious ASCAP Morton Gould Award. Listeners have commented on his music’s vividness and sincerity, and appreciate the fact that he draws on the traditions of the past as well as the wider world of the present.

His looking to traditions of the past, pointed to my next question…How does something like a (Roman Catholic) Mass fit into today’s high-tech and very secular world? “It’s true that the Mass as a text and worship device can feel antiquated and impersonal to us today.” “All of the ritual and heavily religious content can be intimidating for some,” he said. “And, the hierarchical format of a priest evoking the sacred on behalf of the people doesn’t quite fit with our culture, he said, where the individual is important.”

But he noted, “still, in that paradoxical character that things like religion and poetry seem to have, the concept of the Mass is also an intensely personal thing.” “Its focus is entirely on humanity, and on our universal desire to make peace with our deepest fears and insecurities.” Randall believes this is what lends the Mass to that sense of agelessness. “Though the text (of the liturgy, the words in the music) is designed to speak to a higher power, it’s littered with phrases like “have mercy on us” and “grant us peace”, all of which concern human struggles and can resonate with us on a deep level.”

Even with its traditional aspects, Randall incorporated more modern aspects to it, with use of the abstract in some of the vocal arrangements. And perhaps it is this freedom to adjust or re-interpret tradition that he likes most about the San Francisco Conservatory of Music. Originally from New Hampshire, he explained how his journey led him from New England to the West Coast.

It was during his studies and travels abroad that he got introduced to the Conservatory of SF. “In some ways, said Randall, it was a summer program in Paris that brought me here to San Francisco. “Actually, he then said, it was David Conte, another composition teacher at the Conservatory, that drew me to San Francisco.” Conte teaches in Paris each summer as part of a month-long program designed to provide the kind of training that famous composition teachers used to provide.

Randall mentioned, Nadia Boulanger, as an example of a famous composition teacher of the 20th Century, who taught a huge number of important people, from Aaron Copland to Philip Glass. Conte was one of the last students the legendary Boulanger taught. Conte is currently the Chair of the Composition Department at the Conservatory. One very important aspect that the SF Conservatory of Music provides is an atmosphere of a deep love and dedication to music.

“There’s an amazing quality to the culture around here in San Francisco, said Randall, that seems to be the perfect mixture of New York drive and West Coast collaboration. The opportunities are here, but it’s not a cutthroat place. Even people you would be competing with on the East Coast will help you.” That in itself, he considers very fortunate and encouraging to his creative endeavor. “They’re friendly, and they know that a rising tide floats all boats. And that’s not to mention the dramatic landscape and views, great weather, and all of the typical things that everyone likes about San Francisco and California.”

While the school strives for excellence and encourages the utmost in all its students, the SF Conservatory works very hard at ensuring that all students have access to the most and the best experience possible of music training.

Garner who teaches both the undergrad and graduate levels said, “a composition teacher’s goal is to train the student to hear what his/her individual compositional ‘voice’ is.” In other words, it is the teacher’s job to help the student know and understand what he/she actually ‘sounds’ like in front of an audience.”

For the past two years during his masters program, Randall has studied with Garner. Earning a living as a musician, even with the highest and best of training is not easy. Garner mentioned that musicians and especially composers today need to know all the all the angles of the business of it, not just the creative elements.

“A lot of the early training is taken up with the craft of composition, Garner said. And allowing the student to believe in his/her own gifts rather than imitating others’ work. The San Francisco Conservatory is famous for not having an institutional voice” (or style)” he said. “That is, we do not promote any one kind of writing or sound (unlike a lot of universities or East Coast schools). Therefore, our graduates all sound very different.”

And, as Randall explained this commitment to originality is what attracted him most. “When I studied with Conte in Paris and heard from him what the Conservatory was like,” said Randall. He was intrigued and wanted to know more. That is what brought him to San Francisco. “I definitely agree with David Garner about the attitude here at the SF Conservatory.”

“After having dealt with Harvard for a while, said Randall, where the composition and theory program is all about rigor, innovation, and ‘cutting edge.’ it was a welcome relief to hear that the Conservatory didn’t have a proscribed style, and that it aims to make its students better at what they’re already interested in doing.” Randall noted that when such rigor is imposed, it is often at the expense of audience interest.

Randall hopes people will appreciate his Mass and recognize the timeless sentiments and qualities that are musically inherent in any sacred liturgy. The debut of Kyle Randall’s original composition will be on May 16 at St. Mark’s Lutheran Church in San Francisco. For more information see Kyle Randall’s Calendar and event page at his web site.