Madame X was a highly eclectic musical effort, and it showcased a wide variety of musical styles, genres, and melodic flavors. It was described as “stunning,” and rightfully so. It illustrates Madonna’s ability to constantly reinvent musically creatively and artistically. She is not afraid to be bold and vulnerable at the same time. Madame X is an exceptional work of musical art.

Her inspirational song “I Rise” is worth the price of the album alone. Other noteworthy tunes include “Extreme Occident,” “Come Alive,” “I Don’t Search I Find,” as well as “Medellín,” her infectious collaboration with Maluma. She still possesses the voice of an angel after all of these decades, and she is a true visionary.

With Madame X, Madonna was able to once again top the Billboard 200 all-genre charts. That was her ninth career No. 1 album and it sold 95,000 units in its first week, where 90,000 of those units were pure album sales.

Madame X is available on Apple Music and on Spotify, and it is worth more than just a passing glance.

In other Madonna news, Digital Journal proclaimed her residency at the BAM Howard Gilman Opera House as the “greatest concert by a female artist in 2019.” 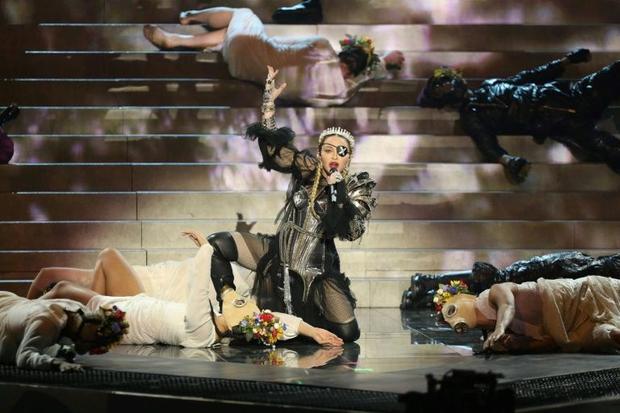 Madonna, seen here during a guest appearance at the Eurovision Song Contest in Tel Aviv in May, 2019, said he “felt raped” by a New York Times article on her entitled “Madonna at Sixty”
Orit Pnini, KAN/AFP
In this article:Album, Female, Madame X, Madonna, Pop