And, said why this year Superfest has much to celebrate about with significance. “This year is important because it is the 25th Anniversary of the Americans with Disabilities Act, that was singed into legislation by President George H.W. Bush in 1990. Superest wants to commemorate the ADA anniversary in a way that goes above and beyond what has been written down as laws and ordinance. We are celebrating the rich experiences and vibrant diversity of all people with disabilities,” she said.
The fact that this year’s festival is featuring a film from Kazakhstan on the other side of the world gives witness that the subject of disability is universal.

As the longest-running film festival of its kind, Superfest aims to push away the usual stereotypes of people with disabilities. “The media often puts a spotlight on the victimhood aspect of disability, said Dr. Beitiks. She serves as Associate Director of the Paul K. Longmore Institute on Disability at San Francisco State University.

She noted that if not depicted as victims then it is the angry and bitter crippled person who is portrayed on screen. “We feature stories/films that highlight people who are living full lives with a disability. That their situation of living with a disability is something that inspires them.” Yes, there are times when people with disabilities are sad or face obstacles but that is true of any life whether a person has a disability or not,” said Beitiks

The Paul K. Longmore Institute on Disability and The LightHouse for the Blind and Visually Impaired are hosting Superfest together. Beitiks is very pleased that all films will be presented with captioning and audio-description; and that all live-dialogue will be available with American Sign Language as well as onsite live captioning.

“Superfest goes way beyond minimum standards for hosting an accessible event, she said. Non-disabled attendees may find that they benefit from these access features, changing the way we experience movie going for the better.”

“Our films this year, said Beitiks are sure to leave our audiences pondering completely new questions.” She then named a few of the films. “‘Fixed: The Science/Fiction of Human Enhancement’, is winner of “Best of Festival – Feature Film,” she said. It explores the cutting edge for our human future as it looks at technologies, from bionics to botox, that promise to change our bodies and minds forever. ‘Bastion,’ is the winner of ‘Best of Festival – Short Film’ and might leave viewers admitting, “I have no idea what that film was about,” but like our judges, they will find a thrill in trying to guess,” said Beitiks.

“The unique thing about Superfest is that it’s driven entirely by the disability community ourselves,’ said Bryan Bashin, CEO of the Lighthouse for the Blind. Superfest is a showcase of juried films that accepts submissions from all over the world. “Our panel of judges is 100 percent composed of people with disabilities. Throughout the process of screening, organizing and presenting the films the Bay Area’s vibrant disability voice is loud, playful and strong.” 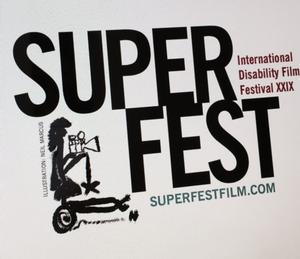 Beitiks noted that “the panel of judges – made up of film aficionados, disability studies scholars, and disability community organizers, all people with disabilities – had a difficult task. Selecting these films from an abundance of high-quality submissions from North America, Asia, Latin America, Europe, and Australia was a challenge,” she said. Yet again, it affirmed the fact that people with disabilities are able to live full and productive lives.

“The selected ten films bring to the screen a variety of topics and disabilities, said Beitiks each helping move forward Superfest’s mission to celebrate cutting-edge cinema that portrays disability culture in all its diverse, complex, and empowering facets.”

Fellow professor and Paul K. Longmore Institute colleague Catherine Kudlick agreed as she said, “Superfest is a great opportunity to change the thinking regarding disability.” “I am so excited, she added. Because for the first time, the festival is now expanded to two days instead of only one. And, screenings/events will be held in two locations: at the Magnes Collection of Jewish Art and Life, in downtown Berkeley and at the Contemporary Jewish Museum in San Francisco the following morning.”

Kudlick is very pleased about the entree of the film from Kazakhstan, entitled ‘To Be or Not To Be,’ directed by Aziz Zairov and Mukhamed Mamyrbekov, received the festival judges’ ‘Excellence Award.’
“I love it that a film is coming to the festival from that far way. It demonstrates that Superfest is going past its North American boundaries and centeredness.” Founded in 1970, Superfest continues to move forward and grow. She pointed out the cultural importance of the festival in that it gives the entire community an opportunity to come together. I enjoy the collective reaction to all of it, at an event like this,” said Kudlick.

Just as Professor Beitiks had mentioned, Kudlick also sees the ADA anniversary coinciding with Superfest as significant and important. “People need to understand that the significance of the ADA is that it is more than just a regulation to put in a ramp or make a curb cut. The ADA transforms into a cultural awareness.”

And, just as Beitiks she believes more needs to be done on behalf of the ADA. Kudlick said, “Absolutely, more needs to be done to raise the standard and go on to the next level and the next. The ADA as a cultural awareness and social consciousness raising is a source of ingenuity, not just about ‘fixing things’, she said. It is about engaging all people and that means everyone, people with disabilities and those who are able-bodied.”

“Fixed” is one of the films that will be featured at this year’s Superfest, beginning on Nov. 14.
Courtesy of Superfest 2015
Both Kudlick and Beitiks see Superfest as an integral part of that consciousness raising. “What can be more culturally universal and have such an impact? Film has that type of quality and power,” said Beitiks.

Founder and director of Woman of her Word, Michele Spitz is honored to continue to support Superfest for a second year. “I am delighted to be a presenter for the 2-day event,” she said. Her contributions as a supporter donating funds to Lighthouse For the Blind towards Superfest, as well as sponsoring independent films by funding and voicing the audio description is something she treasures and takes very seriously. “People don’t realize how accessibility is of the utmost importance in society when it has to do with the arts.”

A press packet including film stills, filmmaker contact info, and backstory are available upon request. Doors open at 5 PM on Saturday and screening begins at 6 PM. To find out more, visit the Superfest International Disability Film Festival web site.