The New York Times has an interesting, if nauseating, example of the new way of “loving art.” The quiz, “Are You Smarter than a Billionaire?” asks readers to pick the top prices in comparing works of art. The selection, however, is a swamp of inferior stuff from top artists, and the ridiculous modern art, with large numbers attached.
In the related article, the big news is that a Modigliani sold for $170.4 million. It’s a pretty basic picture, a nude, and it’s very much in the line of odalisques, a popular 19th century study of naked or semi-naked models. The only good news is that the guy who bought it is a taxi driver turned billionaire, otherwise it’s business as usual in Crap City Art R Us.
There are two Picassos. The one on the left is a very early painting, totally forgettable, almost a doodle. The one on the right harks back to classic painting styles, with some good coloration. Not awful, but hardly Picasso at his most adventurous. The lousy one sold for $67 million, the good one with some actual technique for $12 million.
The pattern repeats, with some damn thing called Orange on Wine by Rothko, a single patch of color, worth $17 million. Who the hell cares about something like that? You could give 17 real human beings decent lives for that sort of money, but no, let’s keep the art racket going so insufferable art cognoscenti can breed a few more art brats.
The “love of Art” in these cases is a need to maintain asset values. These guys know nothing at all about art, but they know what pays — idiots with a lot of money who recognize famous names. The Modigliani, if done by anyone else, would be virtually worthless artistically, without the name. There’s nothing at all original about it. It’s OK, but pedestrian at best.
As pure artistic irritation goes, that quiz is almost unique. It’s a crap festival, artistically, large amounts of largely forgotten eyesores, and almost without exception nothing to do with the best work of those artists. The exceptions are the iconic Lichtensteins, which include the unavoidably famous True Confessions style.
Those two, for those who don’t know, are incarnations of some of the most economic line drawing you’ll ever see. It influenced whole generations of artists, and is revived regularly. It’s efficient line work, it’s simple, it’s highly expressive, and it works well in context with scenes. It’s not what’s generally considered “great art,” but any professional will tell you it’s expert/ virtuoso work at its best, in that genre. It’s copied because it’s a very practical artistic style. It’s actual, working, art.
Art? What art?
The sheer melodrama and spin in famous expensive art is absurd. It’s like some pantomime actor: “The muse is upon me! Quick, hasten to the garage and fetch my spatula! I must paint my toaster in all its glory!”
Well, if that doesn’t cause orgasms, what does? I come from a family of artists in which if someone uses the expression “A splash of color,” you’re allowed to shoot that person, frequently. It’s our version of community service. The Art Racket, which involves insulting as many working artists as possible as often as possible, and charging them their bone marrow for everything from paint to the time of day, is an obscenity.
A real art lover is more likely to be some poor soul who actually spends the grocery budget on something they really like. Not some disease with a large wallet and a small brain convinced it “loves art”. It’s when people start telling you you’ve made a “great buy” that you know you’re dealing with the artistic vermin. These guys are like used car salespeople, just more upmarket, selling Used Art.
Talking about real art — if you check out the Modigliani and compare it with his other works, you’ll see a very familiar, much churned out, style. This guy apparently did work for a living as an artist. There’s a lot of obvious bread and butter work in the vast range of pictures. That sort of output means hard work by definition — these “in a style” pictures are how artists usually try to pay bills. My uncle Raymond used to do well with seascapes. He’d paint them on a sort of needs basis. Nothing to do with his very creative work, just for sale.
The qualifier here is that Modigliani was extraordinarily prolific. Maybe he wasn’t churning so much as working at a frenetic pace. He’s basically a modernist, with a decent eye for subjects and variations of his style appeared in the 20th century. The $170 million painting is a little different, atypical to a point, better than some others, but hardly worth the price of a new school or hospital wing.
In fairness, the guy does have some artistic guts. The paintings aren’t particularly flattering or “obliging” aesthetically. Not cute, just expressive. In those days, Monet or Manet notwithstanding, art was still very conservative. The very strong French influence is a plus, doing a lot for the presence of the subjects, and adding the turn of the century ambience very effectively.
You’ll also notice this money isn’t going to Modigliani. He lived like a true Parisian artist to the best of his ability, died young at 35 of tuberculosis, and left a lot of good paintings, notably this one, Maud Abrantes, 1907. 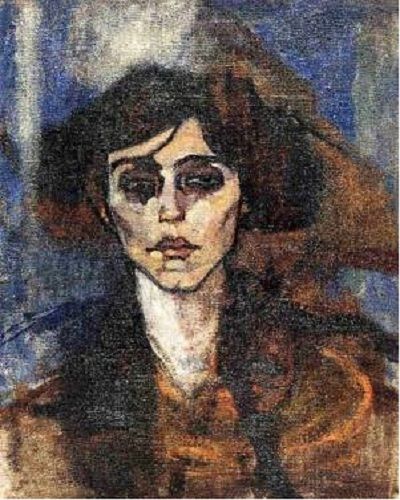 Now the questions:
What are you paying for? Artists as labels, or art?
Forget theory for a minute.
What are you buying?
What does it mean to you?
Answer those questions, and you may or may not be an art lover, but you will be a much better informed buyer.