The significance of the Monterey Pop Festival of 1967 can’t be understated. It was phenomenal by all accounts. Yet for someone like singer Janis Joplin, her appearance at that festival was pivotal. It launched her career. “That time was so special, it was the best time of my life,” said Ostram who took a few moments on New Year’s Eve Day to chat with this reporter about it over brunch.

Now, a grandmother, Ostram has retired to Sonoma. But those memories of the legendary days of Monterey Pop still linger. That is why she was eager to see the documentary. “When I was at SF State U, I worked on the ‘Daily Gator’ and ironically when the campus erupted with protests during the time I was there, another paper emerged while the Daly Gator went on strike with the student protests. It was called ‘The Phoenix’ and the editor there put me in charge of the arts and entertainment column.” “So, I got free passes to all the concerts and events,” Ostram said.

She had said earlier that watching the documentary film made her cry. In fact, she had to take a break from watching the film because as she said, “I was overcome with emotion, I was a basket case.” Amy J. Berg’s film continues to mesmerize audiences and for someone like Ostram who lived through those times, the film is exceptionally poignant and stunning.

Ostram noted all the people she saw in the film, “most are gone.” And, since it was New Year’s Eve, she made mention how “there was always a concert or party at places like The Avalon, Fillmore West for New Year’s. It was some of the best times.” Ostram also pointed out that while there were drugs and alcohol, “there was never any violence or fighting, that I can recall.” “Everyone was just there and had a great time.”

The film “Janis: Little Girl Blue” stirred a lot of powerful memories for former journalist Kathy Bramwell Ostram. She took notes pointing to the things that struck her the most in the 105 minute documentary.
Jonathan Farrell

Ostram had a notebook with her as she sat, recollecting the faces, places and sounds she saw while watching “Janis: Little Girl Blue.” Names like Chet Helms, Sam Andrew, James Gurley, to name a few. Names that today are just names. Yet back in 1967, they were part of the formidable groups that made the very specific San Francisco sound that drew thousands to California and enhanced what came to be known as “The Summer of Love” and the “Hippie Movement.”

Like all young people of that time, drugs were prevalent. But for some musicians and singers like Janis Joplin, hard drugs became a habit. While the film focuses primarily on life and her career from Janis’ perspective, Berg did use interviews from people who knew Janis well, and those times. 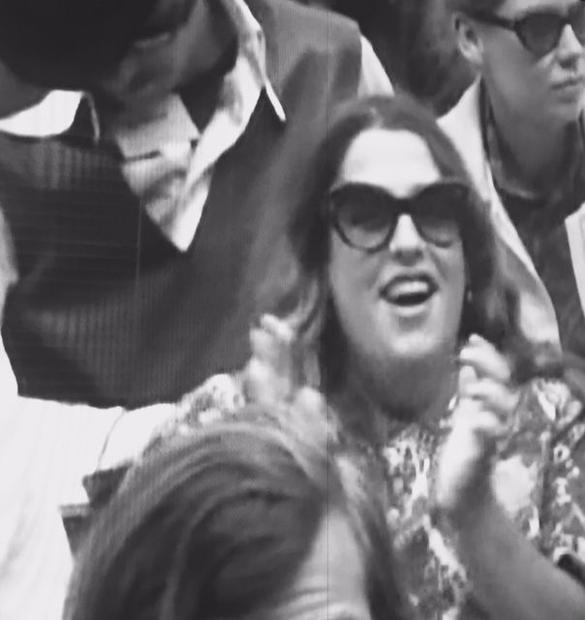 Mama Cass of the group The Mamas and The Papas was among the thousands who watched and was amazed by Janis Joplin’s performance at the Monterey Pop Music Festival in 1967,
Courtesy of Larsen Associates and FilmRise

“What struct me most about Janis (with regards to drugs) was her vulnerability,” said Ostram. She reiterated more than once how “down-to-earth Janis was.” Still, even so, “Janis was not as confident as her onstage persona.” “The life of a musician or traveling with a band can be very lonely and hectic going from gig to gig.” Alcohol and drug use are part of the territory.
Berg captures some of that pace, especially after Janis’ performance at Monterey Pop. What is rather tragic as Ostram noted, is as Janis finally seemed to be off heroin for good, and her album “Pearl” was about to be released, loneliness it seemed caused her to relapse.

She had relapsed before, only this time despite that “pioneer stock” of strength she believed she had in her genes, it was fatal. By all outward indications, the new album, the love affair she stumbled upon while in Brazil, she was aiming for a triumph. And as some of those interviewed for the film noted Joplin would have like other San Francisco rock and roll legends, retire up in Marin County.

What would Janis be like had she not succumbed to that shot of heroin? Would she have eventually retired and lived in Marin like Grace Slick? Would Joplin have then gone on to other things – like write a book or maybe even host a talk show?

There are moments when she speaks to reporters and talk show hosts like Dick Cavett, there is a spark of something. It is clear to see (especially in those talk shows) Janis was sharp and witty. Wouldn’t have been awesome if Janis Joplin was among the first rock and roll stars to do a music video for MTV or be one of its first VJs?

Janis Joplin’s charismatic persona shines through in the documentary which features excerpts from her private letters to friends and family.
courtesy of Larsen Associates and FilmRise

“She was a natural in front of an audience,” said Ostram. And from the clips of the Dick Cavett Show used in the film, Janis had charisma, even when casual. Of all his numerous guests, Janis was one of the few that appeared on the Cavett TV show more than twice.
Cavett was quoted in Berg’s documentary as saying “as soon as I heard her name mentioned on the radio, I knew…(she was gone).”

The emotion, the reflective pondering that Joplin evokes is truly amazing and this something that Berg highlights in her film. And, as this reporter noted, those who lived through those times, like Steve Keyser (current manager for Big Brother and The Holding Company) and Ostram have been deeply moved by what Keyser referred to as “a well done documentary.”