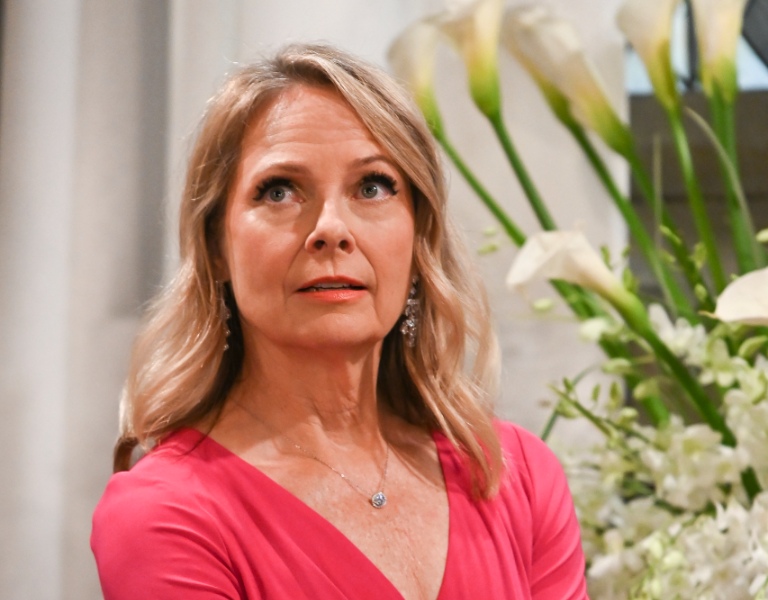 She had great words about working with Johnny Wactor, who plays her on-screen son Brando Corbin. “Johnny is such a good person, he and I are both from the south so I recognize a special quality in him, his chivalry. I recognize that and I appreciate that about him,” she said.

“Johnny takes his acting very seriously and you see that in his work. He is a great acting partner to work with. He knows how to dial in and be fully present when his scenes are challenging. He and Sofia [Mattsson] have done great work with their challenging material over the last few months. Plus, he is dreamy too,” she said.

Burroughs is drawn to playing Gladys for several reasons. “Gladys gets to say all kinds of things that I would never say. She blurts things out and she is not the most tactful person. She is not very shy and it’s always fun to play a character that does things that I wouldn’t do. That’s super cool and I love her for that,” she said.

For young and aspiring actors, she said with a sweet laugh, “Don’t do it.” “These days, you need to make your own content. I’m not young, I have been around for a long time. I have been acting since 1983, and at the time, content creating wasn’t a thing. I was a person where you would give me a script and I would do my best.”

“Get some training and do some theater and really get your chops up on stage. Embrace the more challenging work, then the TV and film opportunities will be much easier,” she added.

When asked how she handles being dialogue-heavy on the show, she responded, “I like it. I usually get a script five or six days ahead and I get started on it right away. I don’t procrastinate. If I don’t, I will be in trouble. They give a head start and I take a big running head start.”

“Also, there are apps out there such as coldRead, that help you record the dialogue. It’s like a real reader and a neat way to drill your dialogue,” she added.

On the title of the current chapter of her life, she revealed, “I Don’t Care What People Think Anymore.”

On being an actress in the digital age, she said, “There are so many more opportunities and more platforms now. When I started in TV, there were only four channels.”

She defined the word success as follows: “If you figured out what you really care about, then spend your time and energy on those things.”

For her dedicated “General Hospital” fans, she concluded, “A huge thank you to them. Some people initially thought Gladys was evil or bad but I don’t think that about her, I adore her. Gladys is showing more facets in her journey such as her softer side and people are really forgiving, so I appreciate people liking her change.”