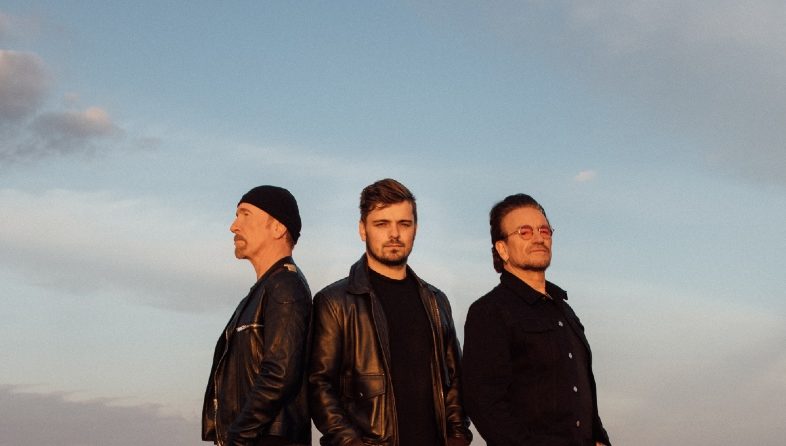 World-renowned DJ and producer Martin Garrix chatted about “We Are The People,” his latest collaboration with Bono & The Edge, and the inspiration behind the song.

“We Are The People” is the official song for this year’s Union of European Football Association (UEFA) EURO 2020 football tournament.

On being afforded the chance to do the official song for the EURO 2020 tournament, Garrix said, “When UEFA reached out for me to do the music for the tournament, was disbelief and then when things actually were confirmed, it turned from disbelief into being very nervous, but also very excited and very grateful that they put their trust, for the music and everything, in my hands, which is still very surreal.”

The Dutch electronic superstar opened up about collaborating with Bono & The Edge of U2.

“I was very, very excited but also very nervous. And then they were like, ‘You have carte blanche. Just make sure it’s euphoric and it feels good,and we trust you that you will do something that matches the feel and the vibe of the tournament,’ which is an amazing honour but, also, a big leap of faith. A lot of trust and, in the back of my head, some pressure because the expectations were really high.”

“And then I had this demo, and it sounded a little bit like The Edge, the intro guitar, and Bono,” he said. “And then we were talking about who would be incredible to have part of the song and, for me, Bono, and The Edge, they looked so impossible that they were not even on the list that I was thinking about reaching out to. And then UEFA and the team said, ‘Well, if you don’t ask, you’ll always have no for an answer.’ And then we sent over the demo and then, I think, a few hours later, I was on the phone with Bono, talking about the song. And he was singing along the melody lines.”

“I had to mute myself: ‘Aaaaah!’ Screaming. [Then] unmuted and played it all cool, but that was crazy. Because the last thing that I expected was for him to be so open-minded and so cool and like, ‘Sure, let’s try it out.’ And he was, from day one, excited, super-involved, really pushed the song. He really pushed me, as well, also production-wise. Like, ‘No, that can be better. This can improve’,” Garrix said.

“It was an amazing, amazing collaboration and, also, with The Edge and how he helped the song,” Garrix said. “They’re both geniuses and I’m very grateful and still cannot believe that I had the chance to work with them on this song.”

He continued, “I flew to Eze to record Bono singing and I’m in the studio next to him and we did the lyrics over the phone and he really lifted a song lyrically to the next level and also his voice, there’s nothing like it. When he starts singing and it’s in the studio or at the shoot, we had the music video shoot where he was singing without a microphone, he was just singing a song, and everybody was just looking at each other, like, ‘What is happening!’ It’s very special. Fast forward, I was in Eze with him, recording this song and it’s such an iconic voice; I had goosebumps during the whole session. And after the first take, I was already.”

On the inspiration for “We Are The People,” he said, “We took a lot of inspiration from how football made us feel and how it unites people, how it brings people together. And we tried to, already in the demo, I tried to capture it, even with the chord progression, but then also with the lyrics that Bono did, with the guitar that [The] Edge added; they really took it to the next level. And we really, really tried to capture that feeling of euphoria, excitement, happiness… Yeah, really excited with how the track has ended [up].”

He acknowledged that he wrote it even before the COVID-19 pandemic happened. “I feel like right now, or [at least] I hope, it will resonate with people even more because I feel like, in general, the world needs something hopeful, something exciting, something uplifting again, especially after this crazy last year,” he said.

The crazy thing about this song is that we wrote it before Corona [COVID-19] happened, but I feel like right now, or [at least] I hope, it will resonate with people even more because I feel like, in general, the world needs something hopeful, something exciting, something uplifting again, especially after this crazy last year. And I feel like, not the song, but the tournament itself is already such a big step, such a big, beautiful hopeful thing that is happening again, that is happening to all these different countries.”

“It’s really special and I hope that this song will bring people together just like the tournament will be doing,” he added.

He shared his excitement for the upcoming football tournament to happen since he feels that is a victory already. “It doesn’t matter who will win in the end, I think, because the fact that this tournament is happening through all these different countries, it can bring people happiness, it can bring people together again after a year of so much… you were almost scared for one another,” he said.

“It’s not normal for a human to be so distant, and I feel like everybody needs that connection, to unite. I feel like with sports and also, hopefully, with the song, I’m grateful if we can be part of that process,” he added.

Regarding his future plans, he said, “I’ve been working on something super exciting already for five years now with my dear friend, Maejor, and it’s a project… It’s about two aliens that crash on Planet Earth, and upon their arrival, they don’t understand that there are borders, they don’t understand the division. They basically look at humans and are like, ‘What are you guys doing?’, but we want to do it in a fun, playful way.”

“We have an amazing animation team behind us who help cartoon-animate the journey of the aliens because we’ve been flying around the universe not paying attention, and we hit a satellite, we crash on Planet Earth, and then the real journey starts,” he added.

“We were thinking about how people would perceive or, like, how people would look at humans if they weren’t human, if they looked from an outside point of view, because there are a lot of things that people do and think [are] normal which [are] not kind of normal sometimes, and we wanted to just shine a light on it in a fun, playful way. The music is very different from the Garrix stuff. I play guitar, I’m singing background vocals; Maejor is rapping, singing, playing drums. It’s really… It’s fun. This year, I had so much time because there was no touring, so besides the Garrix stuff, we’ve also been working on a full album with this project,” he said.

He opened up about life during the COVID-19 pandemic and he spoke about how he is staying creative during these trying times. “Of course, I really miss touring. I miss the fans, I miss the shows, I miss the adrenaline from being on stage, but it was also nice in some ways because I had a lot of time with family, with friends, and also in the studio. Because I’ve had so much time in the studio, I’ve been very creative, exploring, trying out new things,” he said.

“We Are The People” is available on digital service providers by clicking here. It earned a favorable review from Digital Journal.

In this article:Bono, EURO 2020, Martin Garrix, the edge, uefa, we are the people