Mark Wills released his first (self-titled) album 20 years ago. Since then the Tennessee-born 42 year old, who grew up in Blue Ridge, Georgia, has gone on to have a very successful career.

Known for a string of solid country singles – “Jacob’s Ladder,” “Don’t Laugh at Me,” “Wish You Were Here” and “19 Somethin’,” which spent six weeks at number one in 2002, among them – Wills continues to tour regularly and put out his most recent album, Looking for America, in 2011.

The venue chosen for the tribute concert to the slain police officers is Billy Bob’s in Fort Worth, Texas (‘The World’s Largest Honky Tonk’) and joining Mark on the bill will be a host of big names including Tanya Tucker, the Oak Ridge Boys, Johnny Lee, Gene Watson and Collin Raye. Randy Travis will also be making a special guest appearance.

All of the proceeds will go to the aforementioned Assist the Officer Foundation, formed by the Dallas Police Association, an organisation which provides financial assistance to an officer’s family in the event of their death.

Hi Mark, what have you been doing recently?

“We’ve been touring all summer long. I’m spending time with the family on vacation right now, ready to get back at it next week.”

Please tell me about the Stars Behind the Stars concert you’re doing on July 27. How did you come to be a part of it?

“As a loyal supporter of police, firefighters, paramedics and our military, I felt like it was something I needed to be a part of. Kirt Webster and Scott Adkins of Nashville’s Webster Public Relations, who are producing the event, began looking at artists to participate and we were one of the first to say yes.”

What does the Assist the Officer Foundation and being involved in this event mean to you? Do you have friends or family that are police officers?

“It allows us to assist our officers and their families in this time of tragedy. I do have family and a lot of friends who are police officers. Throughout my career I have participated in a number of events that benefit officers and first responders. I am involved in my home state of Georgia with several police charities as well.”

What do think can be done to protect innocent police officers and to stop this senseless violence that seems to be engulfing America and indeed much of the world at the present time?

How will the show work? Will you each be doing a short set and then maybe get together to sing a couple of songs at the end?

“Expect the unexpected! We’re going to go with the flow… Think about it: more than fourteen artists, all of us buddies, so it’s going to be a blast and it’s for a great cause. T.G. Sheppard is hosting and he’ll do a great job.” 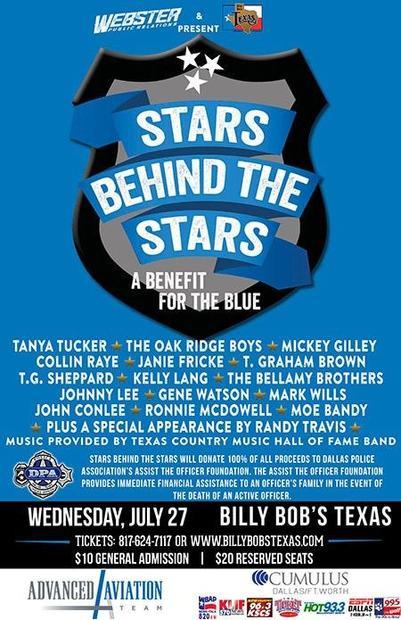 ‘Stars Behind the Stars: A Benefit for the Blue’
Webster PR
Which songs are you planning to perform? Which of your tunes tend to get the best reception when sung live? I think my favourite song of yours is “Don’t Laugh at Me” – that gets me every time…
Advertisement. Scroll to continue reading.

“I’m planning to sing a newer song that we have called ‘Looking for America,’ as well as ’19 Somethin’,’ ‘Jacob’s Ladder’ and ‘Don’t Laugh at Me.’ ‘Don’t Laugh at Me’ has become an anti-bullying song. One of the lines that means the most to me is: ‘In God’s eyes we’re all the same,’ which applies to our world now.

“People say ‘black lives matter’ or ‘blue lives matter,’ but everyone’s life matters. We’re all the same and need to come together instead of standing on platforms and pointing the finger at each other.”

What is special about Billy Bob’s? How many times have you played that particular venue?

“I recorded a live record at Billy Bob’s several years ago and we’ve played there five or six times. When planning this event to help officers and families in Dallas, you want to use the best venue you can find. It felt like we should do the show in the community that the benefit is actually for.”

Will there be any surprise guests?

“Of course there will be surprise guests, and that’s all I’m allowed to say.”

What are your plans for the rest of 2016 and beyond? Do you hope to release a follow-up album to 2011’s Looking for America at some point?

“We will be touring the rest of the year, releasing a new album sometime within the next year and filming a hunting show. We’ll be very busy in 2017.”

Stars Behind the Stars will take place at Billy Bob’s on Wednesday, July 27.

For more on Mark Wills, visit his official website.