“Hollywood Boulevard” came out on July 1 and was the follow-up to “Lucky,” the first single off her forthcoming EP, released back in June. An infectious summertime song, “Lucky” (produced by Isaac Hasson, known for his work with Demi Lovato and Selena Gomez) has already surpassed 100,000 spins on Spotify and has also featured in several episodes of Mark Burnett’s latest prime time TV series, Coupled.

The singer/songwriter/musician, who formed her first band at the age of 10 and who describes herself as an “old soul,” co-wrote all of the tracks on the EP – a powerful statement of intent which includes songs about young love and the fear and excitement of moving to Los Angeles to pursue her dreams.

How are you, Madi? What have you been doing recently?

“I’m great – I’ve been working out a lot. I love pilates and barre. I’ve also been feeling very inspired lately. More than usual and have been jotting down ideas for new music. So the short answer is: I’ve been creating. Creating my physical appearance and new music!”

Please could you tell me about your new single, “Hollywood Blvd.” What’s it about?

“It is an honest song I wrote about the struggles of trying to become a pop star and the perseverance it takes to get there. Once you get over one hurdle there’s a bigger one up ahead. You keep reaching the bar and then the bar rises. Lyrics like ‘If I need to I will draw my own map’ are a raw example of how I will stop at nothing to reach my goals.”

Please tell me about Glare. Where did the title come from?

“The way I best describe my EP is all the songs on it are consistently authentic to me. I write music about real experiences and people I meet or anything that makes me feel an emotion or inspired. My music is the gut of my life.

“A glare is a ‘bright, dazzling light.’ It also means to ‘stare fiercely.’ A wolf will glare before it attacks. The title is a metaphor for my attack on the music industry. I want my music to make people want to hear more and be like, ‘wow!’” 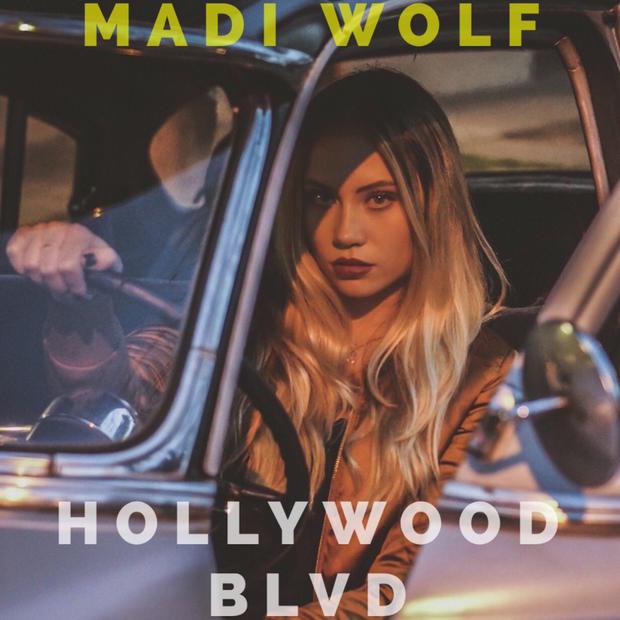 Madi Wolf: “Hollywood Boulevard”
Reckoning PR
You’re only 18, yet you sing and write songs with a passion and maturity that belie your tender years. What’s your secret?

“I knew from a very young age that music was my passion. When I was seven, I hung out with 12 and 14 year olds. I was constantly surrounding myself with people who were older and seasoned musicians to motivate myself to become a better artist.

“Early in my career I became aware of the opportunity that lay before me – from the amazing support I had from my family, to my ability to write mature songs at an early age. I took nothing for granted and was willing to sacrifice what was necessary in order to get where I am today.”

What made you decide to release “Lucky” as the first single off the EP? What do you think the next single might be?

“It was an easy decision. FOX had a new show coming out (Coupled) and they wanted use it. I was over the top excited and not to mention extremely flattered.

“My next single will be ‘Crown,’ which is totally different from anything else you’ve heard from me. I had the pleasure of working with a Grammy award-winning producer on this song, DJ Luney Tunez, known for Rihanna‘s ‘Loveeeeeee Song.’

“It’s the kind of song that David Guetta is going to want to get his hands on for a remix. I can’t wait for the release.”

Which of the tracks on the EP particularly stand out for you? What themes did you address in the lyrics?

“‘Calling You Out’ is definitely a showstopper for me. When I perform it live the cell phones come out to record it. The lyrics are very relatable and I think that’s why it stands out.”

How would you define your sound? Who have been your biggest musical influences?

“I like to say Ed Sheeran meets Rihanna. My songs can be broken down to acoustic and still have a dominant effect. Ed Sheeran mixed with the girl power and moody synth vibes of Rihanna.

What are your plans for the rest of 2016 and beyond? Do you plan to release a full-length album at some point?

“I plan to release my EP and do some touring in the SoCal area. I plan to eventually release a full-length album, go on a world tour and sell out major arenas.

“Most of all, I want to continue to make music that moves people and that has longevity from generation to generation – like the Counting Crows’ August and Everything After and Bob Marley and the Wailers’ Legend – and progress as an artist.”