She went to the island of Sicily, where she renovated a 200-year-old home that she purchased for only one euro. This series premieres on Friday, October 30 on HGTV, and it follows her journey to renovate the 1,075-square-foot property in the town of Sambuca di Sicilia with help from an architect, contractor, as well as other local experts. “It was a big Italian adventure,” she said with a sweet laugh. “It was fun.”

“When I told my kids, I thought it was a really good idea. I saw a CNN alert on my phone that I could buy a house in Sicily for one euro, and I was intrigued since it sounded like it was not possible,” she said. “I looked all over Sicily on the map to see where it was and I sent the link to my friends over at HGTV. I told them that it was a great idea for their network. They told me if I wanted to do it, it would be mine. I never thought about doing it myself, I thought it would be something great that I could produce for them.”

“They sent me over with a crew and I met the mayor, I saw the town and what was available, and then we pursued it. I fell in love with everyone and the town, even though I didn’t fall in love with any of the houses, they were shitholes. This undertaking seemed to be possible so I was very excited. The landscape was beautiful,” she added.

On being an actress in the digital age, she said, “I love the digital age especially now during this COVID, seclusion time. Sadly, I can’t wait for them to start throwing all of the movies that were supposed to come out. I can’t wait to buy a bigger TV.”

“During quarantine, I have been lucky. I have a nice house, I have a nice fireplace, which is my fun thing, and I have a vegetable garden. I can’t complain,” she said. “I am sick of it, I can’t wait for COVID to die. I don’t think I’ve ever wanted anything to die so badly except COVID. I don’t think the worst of it has yet to come about. I don’t think the virus is over yet and it is not going to disappear this quickly. Economically, I think it will take us five years to get back on our feet.”

For young and aspiring actors, she said, “It really has to be the only thing that you can do, and the only thing you can concentrate on. If you can do anything else, then do that. Acting is not easy. I am very glad that my children didn’t follow in my footsteps. It’s just not easy.”

When asked if there were any moments that defined her, she said, “As a woman having my children was a defining moment. That changes you and your outlook on life and things. It’s not about me anymore, it’s about raising the kids. As an actor, I feel very lucky that I fell into Goodfellas and The Sopranos, and they became such cultural hits. Some people will watch The Sopranos and then, people that saw Goodfellas discovered The Sopranos, so I have two different generations of fans, which is really sweet.”

Regarding the best advice she was ever given, she said, “If you can’t take the heat, get out of the kitchen.”

On the title of the current chapter of her life, she said, “COVID-19 sucks.”

She defined the word success as “freedom.” “Peace of mind is something that I strive for every day,” she said. “Success, to me, is the freedom for me to do what I want.”

The veteran actress concluded about My Big Italian Adventure, “It was really frustrating and difficult but it was incredibly rewarding. I liked the way the episode turned out, I laughed, which was fun, though I did not laugh while making it.” 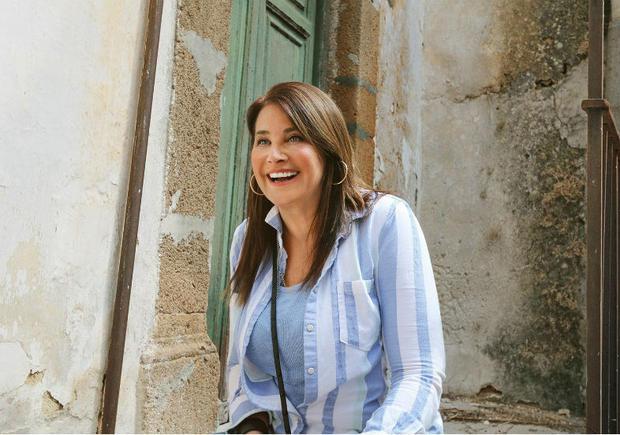