For over two decades, Life Ball has been celebrating life and cultural diversity as the world’s largest and most unconventional AIDS charity event. The opening ceremony attracts more than 40,000 visitors to Vienna’s City Hall Square, where everyone can experience the live show on the massive stage. Following the two-hour-opening, 4,000 ticket holders are ushered inside Vienna’s historic City Hall for the Main Event.

For its 25th anniversary year, New York City’s own Jake Resnicow has been tapped to produce the spectacular GALA that will be hosted by the daughter of the late “King of Pop,” Paris Jackson, and will feature live performances by Patti LaBelle, Rufus Wainwright, and Kimberly Davis, the lead singer of Chic. The evening’s theme is diversity, tolerance, and understanding and it pays homage to the iconic 1965 film, The Sound of Music, starring Julie Andrews.

His reputation for mixing art with nightlife has led to him being called the modern day Steve Rubell and Ian Schrager. “I am honored to be named in such company. They inspire me. Entertainment has always run through my blood,” he said.

Resnicow continued, “When I was 14, I started an entertainment company, doing everything from emceeing weddings to DJing school dances. On a trip to Spain, I was blown away by Matinée, and decided to pursue my dream of bringing a world-class experience to the U.S. It all started in New York City during Pride 2010 where we transformed Manhattan’s Governor’s Island into an extravagant dance arena, with explosive music and thrilling light shows. At sunset, a surprise fireworks display ignited the skyline. This was the moment I knew I found my calling.”

On his job as an event planner, he said, “My brain is always spinning. How can I do more? How can I go one step further? Take for example, Matinee Vegas Festival, where we took over the biggest WaterPark in the country. It demands a full 365-days of planning leading up. In fact, I approach every event like a Broadway show, with a full run-of-show outlining every cue and spectacular moment. Every detail must be perfect. With Life Ball, it all starts with the talent. I am thrilled to be bringing a fantastic team of international superstars including Kimberly Davis of Chic, DJ Kryoman, RuPaul Drag Race All-Star Nina Flowers, Matinee DJ Dan Slater, saxophonist Johan, and Alan T.” 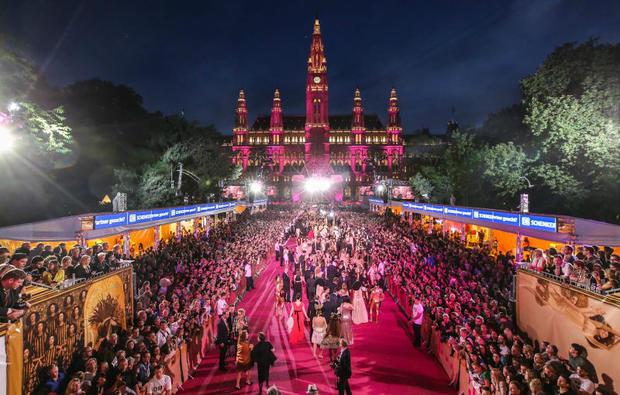 Life Ball is known for its cutting-edge production, so its 25th anniversary, they certainly wanted to take the experience to the next level. “Before giving me the gig, Life Ball asked me: ‘How can we blow everyone away?’ This year, I am bringing thousands of proprietary LED wristbands that generate wireless video effects in sync with the sound of music. Pulsating with light as one, the crowd will become a visual canvas,” he said, thus noting the impact of technology to make this a more visually striking event.

Regarding the importance of Life Ball, he explained, “It is the world’s biggest AIDS charity event. They have raised and donated over 30 million euros to HIV/AIDS projects around the world. Each year, a celebrity designer does a fashion show. We are talking world class designers, like Givenchy, Galliano, JPG, CK, Moschino, Jeremy Scott, Vogue, and it’s a celebrity-studded event. Katy Perry, Janet Jackson, Tiesto, and Charlize Theron are just some of the names that walk the red carpet. It is literally the hottest ticket in Europe.”

This year’s theme is The Sound of Music. When asked about how they will bring the classic 1965 film to life on stage, he responded, “We have many surprises but here’s a little teaser: remember the marionette puppetry sequence? We’ll be paying homage on a much grander scale. Also, in the most climactic scene of the movie, the von Trapps flee Salzburg under the cover of night. We will recreate the scene in our opening with Kimberly, Paris Jackson, Patti LaBelle, and Rufus making their red-carpet landing in Salzburg via the Life Ball airplane. It will be groundbreaking and moving.”

Particularly impressive about Resnicow is that he does all this for free. “Yes, we all donate our time, money and resources for Life Ball. I love throwing parties, and I am equally passionate about giving back. Giving back is one of the most important and valuable things an entrepreneur can do. The Pulse Nightclub shooting was a wake-up call. It challenged me to consider how we can make this world a safer place for our brothers and sisters. I turned to philanthropy,” he said.

Regarding his inspiration to launch Pride With a Purpose, he said, “We will be re-launching this year as we produce some of the biggest events for New York Pride and LA Pride. Pride Month is a reminder that we must continue to fight for equality and take care of each other. There is still a lot more work to be done.”

To learn more about Life Ball’s main event, check out its official website. For more information on the event producer Jake Resnicow, visit his homepage.