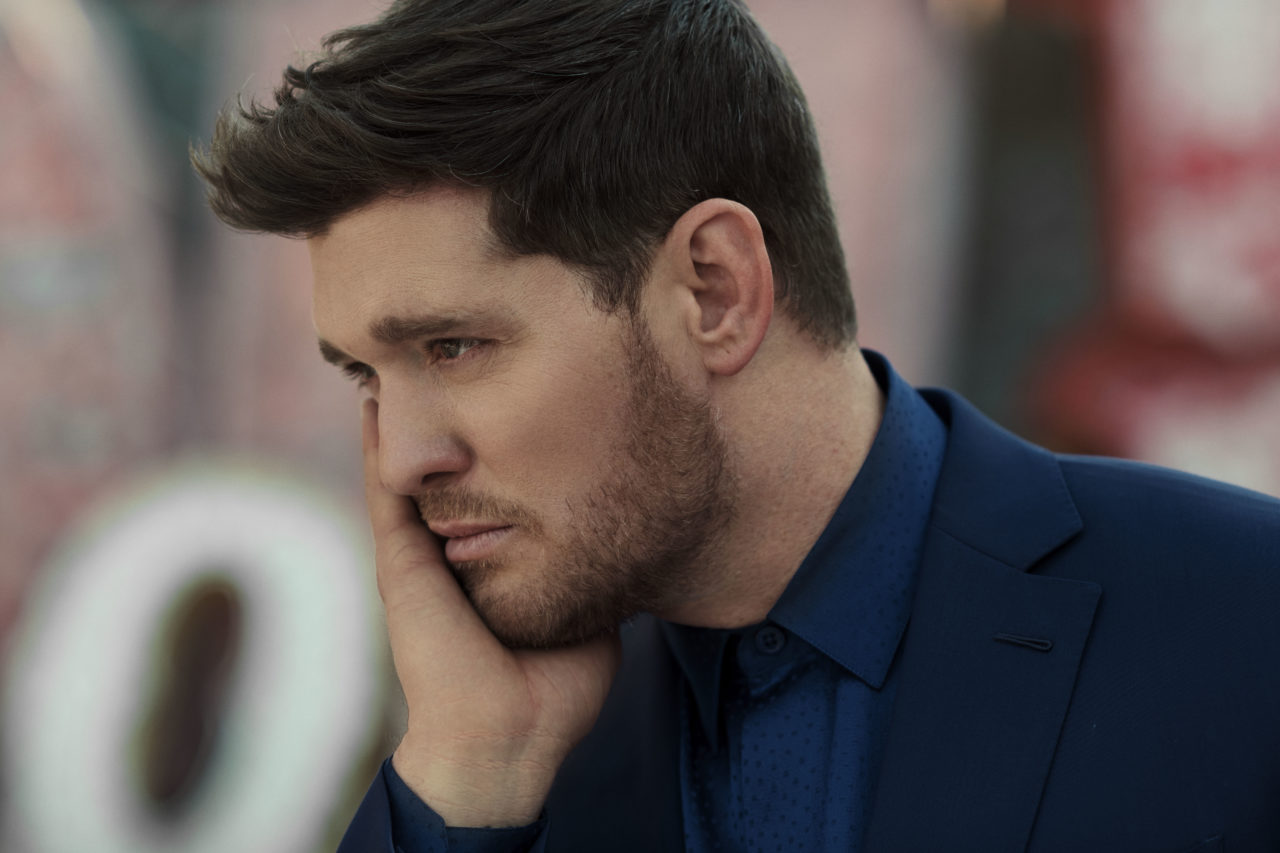 U.S. Army general and former Secretary of State Colin Powell once said: “A dream doesn’t become reality through magic; it takes sweat, determination, and hard work.” Michael Bublé is an artist and individual that epitomizes this wise quotation.

“Higher” is comprised of three Bublé-penned songs and several standards such as Barry White’s “You’re the First, the Last, My Everything,” a cover of Paul McCartney’s “My Valentine” (produced by McCartney), Bob Dylan’s “Make You Feel My Love,” “Smile” (where he is accompanied by a gospel choir), “Crazy,” where he collaborates with Country Music Hall of Famer Willie Nelson, and his own distinct rendition of Sam Cooke’s “Bring it on Home to Me.”

On the song selection approach for his new LP, Bublé said, “I approached it with great difficulty and a lot of love. The truth is that the common thread in this record is my voice, but more than anything, is the fact that I don’t just like these songs, I love these songs and I could not wait to be able to sing them for this record and for the rest of my life.”

Regarding his personal favorite tunes on this album, Bublé remarked, “I am going to be honest, this is a record where I am astounded by the depth of it. I really am. I am so grateful to all of the people I worked with, and for the universe coming together. My favorites are ‘Bring it on Home to Me’ and I love ‘Crazy,’ the duet with Willie Nelson. Also, from the pop songs I’ve written, I would say that ‘Higher’ is my favorite.”

Bublé extolled the songs “My Valentine” for being “so beautiful,” and “Smile” for being “very ambitious” respectively. “Logistically, ‘Smile’ was a very difficult song to put together. It wasn’t about just having a great arrangement and having a great concept being executed, it was the ability to put 130 people in a room with COVID protocols. There were only a few places where we could do that and we found the Fox Newman Scoring Stage here in Los Angeles, and they allowed us to put that many people in a room,” he said.

His latest studio offering “Higher” was produced by Greg Wells and Bob Rock along with Alan Chang, Jason “Spicy G” Goldman, and Sir Paul McCartney. This marks his first studio album in three years and it follows his very successful sold-out two-year world tour “An Evening With Michael Bublé.”

Producer Greg Wells described Buble as a “great dance partner.” “Michael gives me lots of credit but I credit him for opening up his trust to working with a new team. He’s a phenomenal hitmaker,” Wells said complimenting Bublé.

“Since I’ve worked with him, this was the most focused and inspired Michael has been,” producer Bob Rock added. “He understood the record he wanted to make. He had a clear vision. As soon as we started, he stuck his neck out to make each song get to the place that he was hearing it in his head.”

“Higher” also follows the 10th year of the massive success of his seminal “Christmas” album, which continues to sell and stream in the millions and billions. As a result, Bublé’s resonant voice has become synonymous with the winter holiday season.

Speaking of his most recent tour, “An Evening With Michael Bublé,” it was seen by well over one million fans around the globe.

As a performer, Bublé has enjoyed tremendous commercial success these past two decades as one of the most exciting global touring artists out there with sold-out shows in over 30 countries.

‘I’ll Never Not Love You’

His first single, “I’ll Never Not Love You” finds the multi-award-winning hitmaker at the peak of his vocal and creative powers. Bublé co-penned the song with Michael Pollack. It was produced by Greg Wells, and engineered by Joe Chiccarelli and Wells; moreover, it was subsequently mixed by Serban Ghenea.

Bublé delivers his love letter to the movies in a charismatic cinematic video for his latest No. 1 most-added mainstream AC  single “I’ll Never Not Love You.” The video, directed by Andrew Donoho, features Bublé and his wife, Argentinian actress Luisana Lopilato, lovingly evoke key love scenes and classic moments from several popular films.

The “I’ll Never Not Love You” music video is the sequel to his earlier music video for his biggest No. 1 hit “Haven’t Met You Yet” and shows Bublé once again daydreaming in a supermarket.

“It was very romantic for me to have fallen in love with this incredible lady 15 years ago, and to make that video 14 years ago, and to create a cinematic universe in where we get to surprise people with a sequel. Many people didn’t know this was the sequel to the ‘Haven’t Met You Yet’ video. On top of that, it was a wonderful opportunity for us, and a really cool way to announce that we are expecting our fourth child,” he explained.

“I’ll Never Not Love You” is available on digital service providers by clicking here.

On the title of the current chapter of his life, Bublé revealed, “Contentment.” “Being content, fearless, and I can breathe again,” he said.

On being an artist in the digital age, Bublé said, “I feel like things have always changed. When I started as a musician at 16, I was still listening to cassettes, and before that, it was records and 8-tracks. Then, of course, the big CD came and that was fun, and then it became the digital age.”

“I think the digital age has shown us that there are different ways of consuming the music but the hunger to consume the music has only grown. It is harder to make albums because people don’t listen to albums as much but it’s interesting that the actual album is coming back. It’s the fact that I think people still want to have something to hold in their hands,” he acknowledged.

“One of my favorite things about having a new record come out was the pictures, the package, and the liner notes. Having all of those beautiful things to read,” he added.

Bublé listed Kelly Clarkson, Teddy Swims, Ed Sheeran, and Bruno Mars, as his dream duet choices in the music industry. “I think Kelly Clarkson is an amazing vocalist. I am a huge fan of hers,” he said.

“Teddy Swims is also one of my favorite vocalists and he is a beautiful guy too. Ed Sheeran is a good friend and a wonderful artist,” he added.

“I’ve had my dreams come true. I’ve sung with Cécile McLorin Salvant, and I’ve had the chance to sing with Celine Dion, Mariah Carey, Mary J. Blige, and Barbra Streisand,” he said.

“Truthfully, I think Derek is one of the most talented humans in America right now,” he added.

In his personal life, he is the proud father of three children: Noah, Eli, and Vida (and his latest music video for “I’ll Never Not Love You” revealed that a fourth child is on the way). Bublé loves hockey, fantasy football, TikTok, and singing. “Now, I am on TikTok and I am having fun with it. I discover the most beautiful voices on there. Some of these people you come across on TikTok are a true gift,” he said.

Bublé started singing at the age of four in his family home in Burnaby, Canada, and he hasn’t stopped ever since. His eponymous breakthrough studio album was released back in 2003 on Reprise Records.

A series of multi-platinum, chart-topping albums followed including “Call Me Irresponsible,” “Crazy Love,” “To Be Loved,” and “Christmas.” His previous album “Love” debuted at No. 1 on the Billboard 200 all-genre charts. Bublé has sold over 75 million albums during the course of his illustrious music career.

Defining moments in his career and life

On his career-defining moments, he responded, “I don’t think there is a moment that hasn’t helped define me: my failures and my biggest successes. The truth is I think that the more personal moments in my life have defined me and those have transitioned into me as an artist.”

“My family and I have been through a lot,” he admitted. Every person in this world is going to go through adversity, and they are going to go through pain and loss. The one thing it does give us is perspective, and that perspective has given me the ability to be grateful. Honestly, I am grateful for my life and I hope that comes out in my music,” he added.

Advice for hopefuls in music

For young and aspiring singer-songwriters, Bublé said, “If you have fallen in love with music, you have already won. There is no loss in having the greatest romance in the world. Your passion, love, and marriage to music will never hurt you and it will never let you down, you are never alone.”

“It is actually a wonderful way to work through the greatest and the worst things that happen in your life. I am excited for anyone who has enough passion to make music their life. I think that’s a wonderful gift,” he added.

If he were to have any superpower, he noted that it would be “the power of healing.”

‘Higher’ — An album for the fans

For his fans, Bublé remarked about “Higher,” “I made this album for the fans. The truth is 20 years and 70 million records, and I don’t want to say I’m micromanaged but every note you’ve ever heard is me,” he said.

“Even though I am so proud of those records, I wanted a chance for the listener to have a really fresh take on Michael Bublé. I didn’t want to change styles, I just wanted them to get a very fresh take. I went out and worked with brand new producers and Paul McCartney, Bob Rock, Greg Wells, Alan Chang, and Spicy G, and I worked with writers that I had never written before and I used different arrangements,” he elaborated.

“I wanted to give the audience a fresh take on my music but what ended up happening was that I got a fresh take too,” Bublé concluded.

His new album “Higher” is available for pre-order by clicking here.