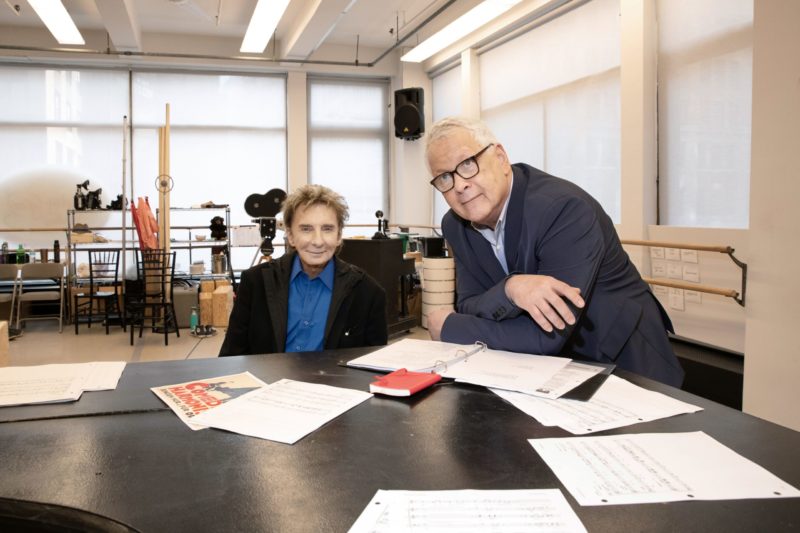 Barry Manilow and Bruce Sussman opened up about their new musical “Harmony,” which opens on April 13.

The show began its previews on Wednesday, March 23, and once it officially opens, “Harmony” will run for seven weeks only (April 14 through May 8). It is produced by National Yiddish Theatre Folksbiene. It is being presented Off-Broadway at the Museum of Jewish Heritage in Battery Park. “It is the perfect place for this show,” Manilow said. “When they told us they were interested in ‘Harmony’ we just couldn’t say no.”

“Every stone in this building has been put there to encourage remembering. Our play is about remembering and this is the perfect home for this piece,” Sussman added.

“This place is inspiring for us. Every time we look out the window there is something deep and you are looking at history,” Manilow said.

It is directed and choreographed by Tony winner and Emmy-nominated director Warren Carlyle. It is based on the book and lyrics by Bruce Sussman with music by Barry Manilow.

The silver lining during the pandemic for both Manilow and Sussman was the ability to work on this musical. “We met every Tuesday and Friday on Zoom with our director, Warren Carlyle. We shook things up and saw what we came up with,” Sussman said.

On the title of the current chapter of their lives, they both said in unison, “Harmony… At Last.”

“Harmony: A New Musical” tells the true story of the Comedian Harmonists, six talented young men, Jewish and gentile, that came together in 1920s Germany and took the world by storm with their signature blend of sophisticated harmonies and wild stage antics.

The Comedian Harmonists sold millions of records, starred in a dozen films, and packed the houses of the most iconic concert halls around the globe until the world they knew changed forever.

Their incredible story inspired music industry living legends, Barry Manilow and Bruce Sussman, to create a new musical with an original score that celebrates this extraordinary group of friends and ensures their quest for true harmony in the most discordant chapter of human history will never be forgotten.

“Harmony” is based in part on The Comedian Harmonist Archive as curated by the late Dr. Peter Czada.

Manilow and Sussman are both firm believers that their new music is very timely and relevant, especially during these trying times that the world is going through. “This is true,” Manilow said. “A lot of things might seem like we are copying the headlined but a lot of these things we wrote five or six years ago and yet it feels like we wrote it yesterday.”

“It is resonating like crazy. I am happy that audiences are finding it satisfying though I wish it wasn’t as relevant as it is because that means that the world has gone to hell,” Sussman added.

Key to their working relationship

Particularly impressive about Barry Manilow and Bruce Sussman is that they have collaborated together for over five decades.

“We loved this idea and we loved this piece, and it always sustained us. We learned that this piece was the one for us,” Sussman acknowledged.

“I learned that I have a lot of patience. We believe in this show so much that we can’t let it go. Frankly, it won’t let us go,” Manilow said with a sweet laugh.

“‘Harmony’ reminded us exactly how satisfying and fulfilling this can be when it’s good,” Sussman said. “Barry loves it and this is my proudest achievement. There is nothing that I have done in my career that I am prouder of.”

For young and aspiring artists, Manilow said, “You need to love the craft that you are going into because it’s a long process, at best. You better love it.”

On their definition of success, Sussman and Manilow remarked, “Success, for us, artistically is loving what we have done.”

For their fans, Manilow concluded about “Harmony,” “We want the fans to get the story: these people were so innovative. They were the first of their time to sound like the Backstreet Boys, The Four Freshmen, and Marx Brothers. They were the first group to ever do those kinds of things. We want people to know that the Comedian Harmonists were inventors. We will let people know that they were there, and this is what they did, and it was remarkable.”