He scored unprecedented access to Apple CEO Steve Jobs. He surrounded a naked Richard Simmons with veggies. Through his lens, Alan Levenson portrays cultural icons like they’ve never been seen before. A Digital Journal Exclusive!

North America loves celebrities. We read tabloids like they’re high school yearbooks for the cool kids we’ve always wanted to befriend. We crowd red carpets with the hope of catching a glimpse of the star du jour. But how many of us can truly know the personalities behind the rich and always famous?

If you’ve seen Alan Levenson‘s photography — and most likely, you have — then you’ve seen celebrities displaying the type of raw emotion that paparazzi can never hope to capture. As an editorial photographer, Levenson turns celebrity portraiture into powerful shots revealing another layer of the subject. 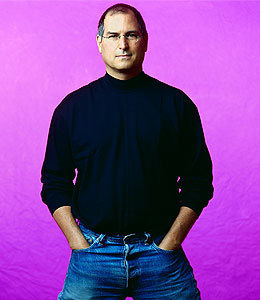 “It’s hard to look deep into people’s lives, but my end goal is to show something unique about the person,” Levenson says from his home in Santa Monica. After 22 years of shooting more than 1,500 people, Levenson can rest assured he’s given the public original takes on overexposed celebrities — he’s shown Billy Crystal beaming a boyish smile, wearing only one shoe; he put Jennifer Tilly in a bubble bath to seduce the viewer with patches of bare skin and come-hither eyes; and he made a young Bill Gates look more jubilant than a Cirque du Soleil clown.

“The outside persona of a celebrity is superficial,” Levenson, 54, says. “It’s important to get up close and learn something about the inside even though only the outside is shown.”

It doesn’t matter if Levenson is shooting for Vanity Fair, Men’s Journal, or Fortune. In his world, fame is merely the shadow arching over the soul of each subject.

Posing the celebrities outside of their comfort zones is part of his creative process. “Basically, I want to allow them to be themselves in some way,” he says. “Some people need less encouragement to be themselves, like Robin Williams.”

Another memorable shoot was the Courtney Love and Kurt Cobain session. Levenson was assigned by Newsweek to photograph Love, who was living in a squalid apartment with Cobain. “Kurt didn’t want to do anything with the shoot,” he remembers. “He was on the phone in the other room, asking doctors to prescribe him pain medication for his sore back. But I don’t think he was looking for Aspirin.” Love eventually warmed up to the idea of the shoot once she became comfortable posing in her “very Bohemian” bedroom, as Levenson describes it. “The whole time, though, she had one of those I-don’t-care looks.”

Shooting Bill Gates early in the CEO’s career was a different experience altogether. Gates was proud of how high he could jump, Levenson learned, so he asked the Microsoft co-founder to show him some vertical. 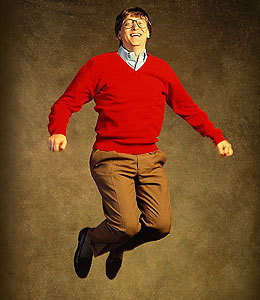 A young Bill Gates shows off his athletic prowess.
Photo by Alan Levenson

Gates gladly leaped high in the air, and Levenson could tell he was having a good time. “That was a time when there were less PR handlers surrounding Bill, when he could really enjoy his time with media,” Levenson says.

Before Levenson was rubbing elbows with the rich and infamous, he was a University of Connecticut student taking a photography course because “it sounded like it would be fun.” He later got a job shooting buildings for real estate companies but then moved to photographing flesh-and-blood subjects as an assistant to a Time staffer.

Spending his mental energy on creating visually interesting images has given Levenson enough experience to offer pointers to beginners looking to earn a reputation. He says it’s easier than ever to be a photographer, in light of the anyone-can-do-it digital age. More competition means the young photographer has to stand out in a crowd. “Prepare for a tough road ahead,” Levenson warns. 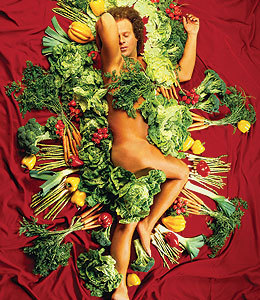 Richard Simmons poses with a vegetable garden in an effort to mimic Marilyn Monroe’s Playboy photoshoot.
Photo by Alan Levenson

On a shoot, Levenson enjoys using a Nikon D200 because he favours its compact size and durability. “The price is right for the pixels delivered,” he says, “and the file size is more than adequate for most applications.”
The hardware, though, is only one part of the job. “The more you care about someone individually, and not just as a 2D image on the page, the easier it is to take a good picture,” Levenson says. “In the end, you just want to connect with people.”

Which is why Levenson is looking beyond celebrity photography for an upcoming project focusing on everyday working Americans. “I want to show people doing physical jobs, like welders or a craftsman who rebuilds musical instruments,” Levenson says. “As much as I love shooting famous people, it’s important to learn from the individuals making our lives possible.”

To see more of Levenson’s work, check out his website.