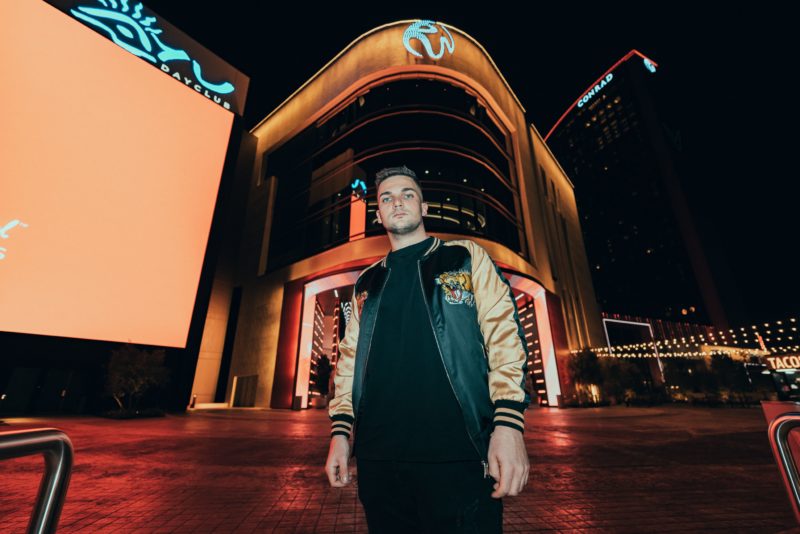 He continued, “My friends and I started this project a few years ago when we were stuck in Vegas during the lockdown. We had nothing fun to do, but we still wanted to party. I decided to buy a DJ Controller and learn how to DJ so that we could throw these kitchen ‘raves’ every weekend.”

“To see it go from that to a residency at Zouk, is absolutely crazy. In a weird way, though, it all makes sense. I’ve been involved in music (in some way) since I started playing the piano when I was 2 years old. So all of this just feels like one massive full-circle moment,” he elaborated.

“I played two shows at Zouk so far, and they’ve both been so much fun. I’m super excited about the residency this year and can’t wait to see as many of you as possible at the shows,” he said.

Regarding his music and songwriting inspirations, he said, “I grew up in a musical family, listening to a wide range of genres. I remember when I was super young I would make these CDs for my dad to play in the car, and it would have 20 songs from like 10 different genres. It was all over the place, but it was always good music. I think it really made me appreciate different sounds and styles, which led to me always having an open mind when I listen to new music or when I discover new artists.”

“My music is inspired from my own life and the journey I’ve been on for 26 years. I grew up in Malta (Europe) and spent a lot of time traveling the world over the last five years. I’ve lived (and partied) in so many different countries; US, Indonesia, China, Japan, England, Austria, etc. I always find that my set is a combination of all the different experiences I’ve had,” he said.

“Music is so powerful,” he admitted. “You can change the mood with each song, and each song brings back different memories. The best part is, each song has a different meaning for people. Same thing when I’m making my own music. I always start sessions by listening to a lot of different tracks from different genres. I’ve always been really good at picking my favorite things from other people’s styles, and creating my own style from it.”

On his future plans, he said, “This year, my main focus is this music project. I want to play more shows around the world and just work with more amazing people on new music. The collaborative part of this project has been my favorite thing so far. I thrive when I’m surrounded by super talented individuals that have a similar energy to me.”

“Music has unlocked so many opportunities throughout the years, not just in the music industry, but beyond that. So I’m very excited to see what else I end up working on this year outside of music,” he said.

“I’m working on some really cool tracks right now that I’m very excited to release,” he said. “Going off of what I said earlier, I think people will be surprised with some of the songs I release over the next 12 months. I’m trying to collaborate with a lot of talented artists from different genres. In the background, I’m doing a lot of work with startups; especially in the web3/crypto/NFT space.”

“I’m also working on my own NFT project that will most likely have a strong link to my music project. I’m so grateful to have an amazing group of friends that are working on cool projects in different industries. We’re constantly sharing ideas and feedback, and trying to find creative ways to combine what we’re doing,” he added.

On being an artist in the digital age, he said, “The Internet in general, specifically Social Media, was such a game-changer for me. I grew up on a small island in the middle of the Mediterranean Sea in Europe. It doesn’t get more disconnected than that. Everything seemed so far away. I grew up traveling to the US a lot so I was exposed to a completely different world, but still, it all seemed so far away. When social media became a thing, it changed everything. All of a sudden, nothing seemed that far away anymore. It was all very connected.”

JONAH continued, “My life changed when I sent a Facebook friend request to Joey Ingram (professional poker player; and one of the biggest public figures in the poker industry) back in 2015. I wanted to be a professional poker player at the time, so I was just trying to connect with people in the industry. He randomly accepted my friend request and we slowly became friends. We later ended up working together, and he’s the only reason I ever made it to Vegas in 2017. He’s now one of my best friends. It’s a crazy story, but it all started with social media. There are just so many opportunities out there.”

“I am working on so many songs with people from all over the world, some who I’ve never even met in person before. It’s really up to you to make something of it, but the opportunities are definitely out there. Same thing with playing shows. The biggest audience I’ve ever played in front of was during a digital live steam for zed.run (a digital horse racing, crypto/NFT game). We streamed it out of a studio in Vegas, and people tuned in from all around the world. It seems so simple these days, but it’s still such a crazy thing to me,” he said.

He listed Tones and I and Girl in Red as the two female artists that he would love to do dream collabs with.

On his definition of success, he said, “To me, success means waking up & going to sleep super happy every day! Being excited about everything you have to accomplish throughout the day is such an amazing feeling. When you frame ‘success’ in this way, it seems so much easier to be successful than a lot of the definitions people have for it.”

“I used to define success as having a lot of money, until 2017, when I had my best year ever, full of insane experiences that I had always dreamed of…all while having the least amount of money I’ve ever had. Since then, every year has been better than the one before,” he said.