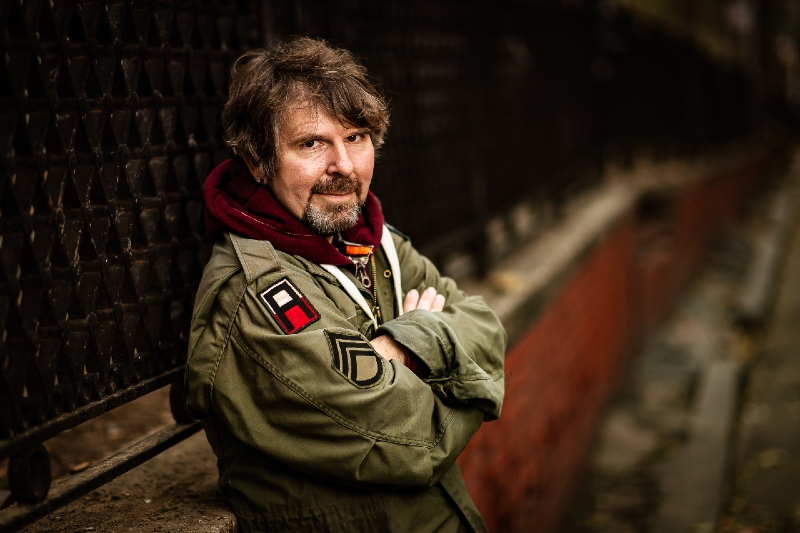 Director Jeremiah Kipp chatted with Digital Journal’s Markos Papadatos about his new film “Slapface,” and being a filmmaker in the digital age.

On directing “Slapface,” Kipp said, “Being present for the whole experience has been meaningful. Most of my directing work, particularly in the horror genre, has been work-for-hire and being of service to someone else’s story. I’ve directed six features, but weirdly ‘Slapface’had the feeling of being my first film maybe because it’s the most personal. It’s not autobiographical (I never befriended a seven-foot-tall creature in the woods) but in many ways, it is about the rural lower-income world where I grew up.”

“Developing ‘Slapface’ with Mike Manning was a rewarding creative partnership,” he said. “How often do you get notes from a producer saying ‘can we make this part of the story even darker and more tragic?’ You never hear that ever, so I knew we were both telling the same story.  I felt completely supported and encouraged. Making low-budget independent features is tough and Mike is the hands-on, sensitive, smart, and courageous producer you want in the trenches with you,” he elaborated.

Kipp had great words about working with the entire cast of actors. “Every actor is so different and comes to the work with their own process,” he said. “Mike shows up very prepared, very disciplined, but always likes to do a loose, chaotic take after we got what we wanted, which often felt so fresh and spontaneous it went into the edit. August Maturo is deeply instinctive and emotionally available, but also technically proficient with an understanding of the camera after years of working in television.  He’s like a very old soul.”

“Both of those actors forged a tight bond that could be felt on set,” he said. “Their friendship informed the film. And since they had to do all these heavy scenes of slapping each other, coordinated (safely) by our stunt guy Mack Kuhr, it creates a deeper intimacy and trust.  Scenes where the characters hurt each other often involve actors protecting one another.  That’s a strange paradox and good for the movie.”

“Lukas Hassel was wonderful as the monster,” Kipp said. “I’ve known him much longer than the other actors.  He was often involved with script development readings over the years and brought such personality and depth to the role. The toys clattering off of the monster’s rope belt was his idea, and it was fantastic developing the look of the creature with him and wardrobe designer Anna Davis.”

“They were as much a part of making the Virago Witch as the special effects team, and indeed it is just rubber and paint without a strong actor like Lukas underneath. He made the monster a proper character in the drama, for which I’m enormously grateful,” he added.

“Honestly, they were all so brilliant. Mirabelle Lee was so complex and introspective as Moriah. Bianca and Chiara D’Ambrosio reminded me of Kurt Russell in their charisma and desire to break out of Disney-style narratives into dark storytelling. I’d love to make a horror movie about twins with them. Dan Hedaya and Libe Barer were amazing and cared deeply about the work. We lucked out with a great cast,” he said.

Kipp opened about his favorite part of the experience making “Slapface.” “During principal photography, the crew was largely friends I’ve been on set with for years.  It makes a huge difference on a low-budget independent film where the art department, grips and electrics, camera department, and sound mixer have got your back. We had a lot of support behind the scenes. Even the extras were family members, long-term friends, and other horror film directors,” he said.

Kipp continued, “Director of Photography Dominick Sivilli and I have been making films together for over ten years and indeed he was the one who persuaded me to make the short film that led to this feature getting made.  Katie Dillon has been my editor for several movies in a row.  We have mutual trust and a shorthand.   It’s great to work with people you know because there are fewer questions; we know what to expect from each other as dance partners.”

“That said there’s always room for a fresh new collaboration, and when Mike Manning introduced me to composer Barry J. Neely he became a vital part of the storytelling, as key as August or Katie or Dom.  There is no favorite part of the process or best colleague; we are all in this together following the river,” he added.

On being a director and filmmaker in the digital age, he said, “Post-production was during the early months of Covid, so much of our interfacing was over the computer.  That just feels Ike the shape of things.  We’re always finding new ways to tell old stories, and emerging technology is a part of that expression.”

“We were able to access a wide audience at Cinequest through streaming their film festival. That’s wonderful, but so was showing “Slapface” at a gigantic screen in London’s Leicester Square where the viewers had a group experience and sat together quietly after the lights went up, collectively moved by the story. Both ways allow you a different road in to the movie.  I’m delighted we will be streaming on Shudder in early 2022,” he said.

For young and aspiring directors and filmmakers, he said, “Keep making new work, even if it’s cheap or on your phone.  Make hundreds of small films and try to push yourself to experiment further each time.  Keep writing if you can, and develop those short films to larger stories.”

“Always start from the place of, ‘What is important for me to share with an audience?’ We don’t make stories for ourselves; they are meant to be shared with others. It’s okay to copy other directors when you’re starting out but use those tools to find your own voice, which will be unique and one of a kind,” he said.

On his definition of success, he explained, “We mustn’t chase success.  It comes and goes and isn’t up to us.  The important thing is to continue to create your work to the best of your ability, with those who are wholeheartedly with you on the adventure.”

“I made “Slapface” the way I wanted to make it after many years of trying to get it made, and got to do it with the right talented caring group of people. That’s a moment of success, and I am living that joyfully, but we’re climbing a series of mountains in our lives. ‘Slapface’ is one of many, and it no longer belongs to me; it is for the audience now. You don’t feel successful starting a new project, you’re a student learning the process anew,” he said.

Kipp remarked about the film “Slapface,” “It is a horror film about a child grieving the loss of his parents, struggling to maintain a relationship with his older brother in a complex knot of love and abuse, and seeking solace in his friendship with a witch that no one else believes in.”

“Nothing can stay hidden for long, and these relationships explode in unpredictable and violent ways.  In some ways, the creature, as scary as she is, feels less dangerous than the wild and dangerous animal that is a human being.  All we want is to be loved, all we fear is to be hurt,” he said.

“We hope to take audiences into this imaginative world of trauma and monsters,” he said. “I’m gratified to hear that audiences who come from a childhood of being bullied or abused find this story cathartic and moving, that by framing the story using the form of a horror movie we can talk about real pain. No one deserves cruelty ever, and our film (as dark and tragic as it unfolds) was made in the spirit of compassion for all the characters and audience alike. And, of course, we hope to give everyone a good scare.”

“Slapface” will screen at Grimmfest for its regional premiere on October 8th, at 2:35 p.m. at the Odeon 6 Theatre (UK), and October 10th, 7:10 pm at the Odeon 5 Theatre (UK). To learn more information or to obtain tickets, check out the Grimmfest website.