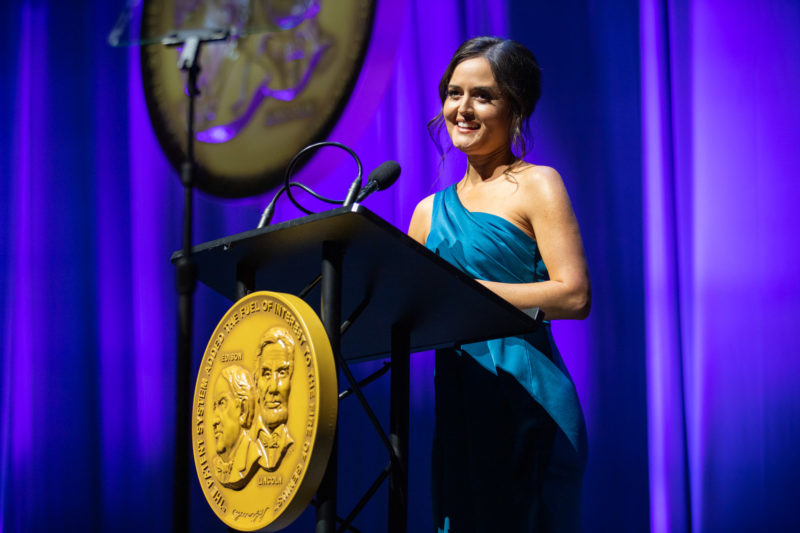 “I am so incredibly proud to have been asked to emcee the National Inventors Hall of Fame Awards again this year,” McKellar said. “I invite you to take a moment to really look at their faces and be inspired: These are truly are today’s superheroes, whose work we often take for granted… but they make our modern world work!”

Croak is known for her patents that advance voice-over-Internet protocol technology.
Rox invented laser dermatology used to remove port-wine stains on children’s faces, and other trauma.

Way back in 1962, James E. West invented the “electret microphone” that converts voice to electrical signals for high fidelity. Still today, 90 percent of microphones (including hearing aids) use this technology – and that was the guy who figured it out.

Wu is a chemist that invented synthetic oil that improves efficiency in car engines and wind turbines.

McKellar proclaimed Lonnie Johnson as a “brilliant” nuclear engineer that invented the “Super Soaker water gun.” “This guy could have retired for life many years ago, but he is passionate about working on a new generation of rechargeable batteries to help protect the environment,” McKellar said.

The National Inventors Hall of Fame connects world-changing innovators with the next generation through #CIC2022, #CampInvention, and more. “Check out its programs promoting STEM education and role modeling including @campinvention at invent.org/camp and peruse their blogs. I encourage you to go to invent.org, poke around, and be inspired,” McKellar said.

Most recently, McKellar starred in the original film “The Winter Palace” on GAC Family opposite Neal Bledsoe, where she also served as an executive producer. The movie earned a favorable review from Digital Journal, where it was hailed as “magnificent.”