Justin Elizabeth Sayre, to give him his full name, has been presenting his monthly programme, filmed at Joe’s Pub in New York City, since 2009. In it, the flamboyant dresser and leader of the “International Order of Sodomites” (I.O.S.) comments on the issues of the day and honours a particular person or cultural event iconic to the gay community.

The protégé of Sex & the City creator Michael Patrick King recently appeared on HBO’s The Comeback opposite Lisa Kudrow and also published his first novel for young adults (he’s currently finishing up his second), entitled Husky. He spoke to me from Los Angeles.

“Husky is a novel about a young guy named Davis who is about 12 and is at that strange part of life where people’s bodies and also their perceptions of bodies start changing,” explains Justin in his very distinctive voice that bears a slight resemblance to Roger the Alien from American Dad.

“He’s having a tough time with a lot of that, so it’s really about a transition to a better understanding of himself and also his interactions with not only his friends, but with the adults in his life as well.”

I asked the extravagant thirty-something, a great admirer of Jack Benny, George Carlin and drag duo Kiki and Herb, what he enjoys most: writing, performing or acting. “Well there’s nothing quite like performing live and that’s where most of my background comes from…

“But each is a great challenge and in each case I’m very, very lucky to work with wonderful people. It’s always a joy to go to work on something new… I do love performing live and I do love the experience of live theatre, so I would say that’s still my favourite, even though I’m very fortunate to work in the others.”

Expanding further on his monthly live show, The Meeting, and how he puts it together, the theatrical entertainer states, “Well I’m always kind of collecting information about what’s going on because The Meeting is so topical. I do try to keep abreast of politics and pop culture things that are happening, but a lot of it is structured and there are certain jokes that get written down.

“Because I’ve been doing it a while, I leave some of it to improvisation just so it’s exciting and thrilling for me. I know the structure, know where it goes, but the journey of it can always be different and I really enjoy a process that leaves room for that.” 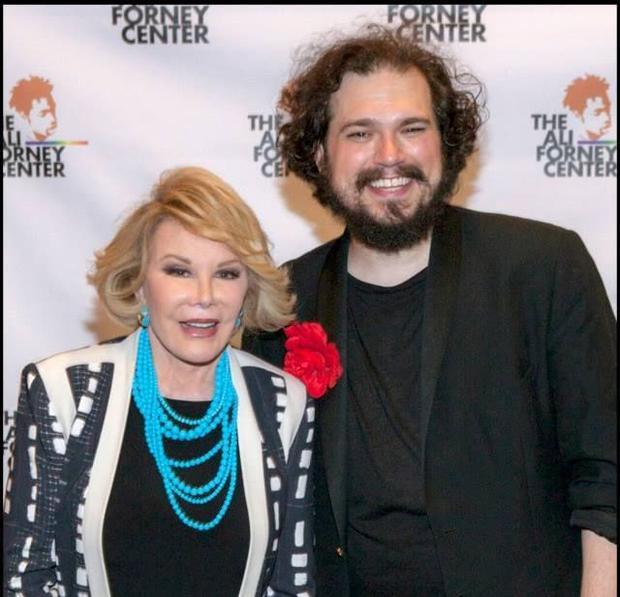 Justin with the late Joan Rivers.
Courtesy of the Ali Forney Centre

How did the aforementioned Michael Patrick King help Justin in his career? “Well Michael, who is my boss at 2 Broke Girls, saw a video of The Meeting and I happened to be in Los Angeles at the time. Through a mutual friend he got my number and called me in for a meeting.

“It went well and he offered me a job writing for 2 Broke Girls. It’s been a wonderful experience. Michael’s such a generous and talented man and he’s really educated me in so many ways about making art and making entertainment on a large scale, and I’m forever grateful for that.”

For more information on The Meeting, visit the show’s official website.

Sparkle & Circulate with Justin Sayre, the official podcast of the International Order of Sodomites, can be downloaded here.

Justin is also set to release a live comedy album, The Gay Agenda.