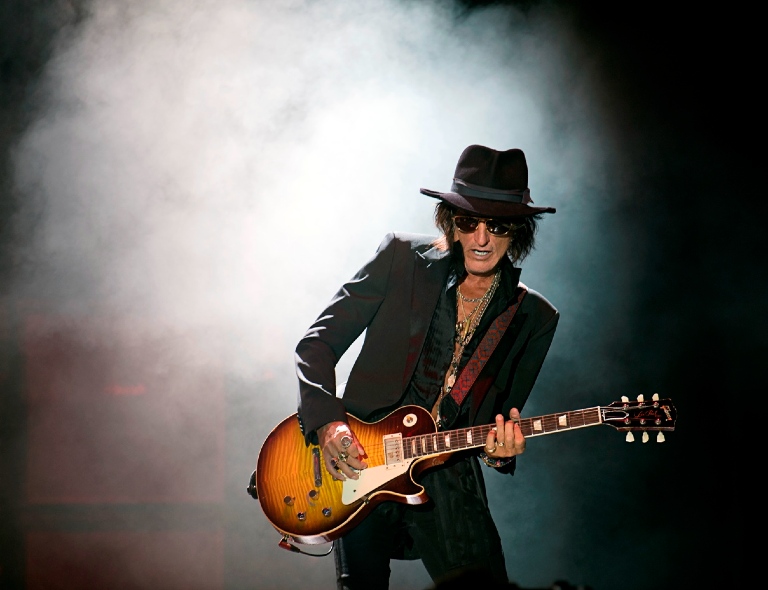 The iconic rocker contributed additional songs to the Brad Furman-directed film “City of Lies” film, which was released earlier this year in theaters and VOD. It stars Perry’s Hollywood Vampires bandmate Johnny Depp, and “City of Lies” came out on Blu-ray and DVD on June 8.

“City of Lies” was released via Saban Films. It is a dramatic crime thriller that follows the investigation into the notorious murder of the iconic rapper Notorious B.I.G.

Johnny Depp stars as the determined LAPD detective Russell Poole, who has spent nearly 20 years trying to solve the murder, with Oscar winner Forest Whitaker as Jack Jackson, a journalist who teams up with Poole in search of the elusive truth. Together, they explore why the case remains cold, and why a secretive division of the LAPD is seemingly set on keeping it that way.

He shared that he collaborated with film composer and producer Alberto Bof, one of the key musicians on the soundtrack. “I was overwhelmed by his keyboard playing. I was stunned. I never had a chance to jam with a keyboard player that is classically-trained,” he said.

“This was early and they had a couple of clips from the movie, so we ended up working for two to three weeks in the studio and getting the feeling for the musical dialogue between me and Alberto Bof. We got some chucks of music that I guess worked,” he said.

“I was finished with that project and I was on my way home from the airport after a month on the road with Aerosmith,” Perry said. “I was about 10 minutes from my house, I hadn’t seen my wife in over a month, and I was anxious to get home. I noticed a phone call came up on my phone from an LA area code, I happened to pick it up and it was Brad Furman, the director.”

Perry shared that Brad told him that he had an emergency since they wanted him to contribute more music to the film, and that “he needed it now.”

“I didn’t know where a studio was in my area, and he said he would call me back in five minutes. Five minutes later, he called back and said ‘I found a studio, it’s 10 minutes from where you are and it will be open for us in an hour.’ So I got home, gave my wife Billie a hug and kiss, explained to her what was going on, dropped off my stuff and grabbed my guitar, drove over to the studio and I was recording within an hour. A few minutes turned into a few hours as Brad described to me the scenes where they needed additional music.”

“This was a pretty flipped-out recording session, considering he was in London, I was in Florida. In my whole career, I’ve never had to switch gears so fast on a project as important as this,” he explained.

His work with the distinguished rock band Aerosmith has resulted in a limitless array of accolades and honors. Some key milestones over the past 30 years include album sales in excess of 100 million units, four Grammy Awards, 12 MTV Video Music Awards, two People’s Choice Awards, as well as an induction in the coveted Rock and Roll Hall of Fame back in 2001.

Rock and Roll Hall of Fame

“When we first started the band, the Rock and Roll Hall of Fame didn’t exist, so it really wasn’t at the top of the list of goals for us,” he said.

For young and aspiring rock bands, he said, “If somebody gives you a chance to play, do it!”

Regarding the key to longevity in the music business all of these decades, he responded, “People love music, whatever form it takes, and people have been dancing for as long as people can remember. Music can be used in many ways whether it’s religious and it definitely has a thread going through the human animal. A lot of it has to do with the rhythm.”

“When I write a song, I usually start with a rhythm of something that inspires me and that’s where it comes from,” he said. “If you listen to music, even pop music over the last 50 years, the majority of everything that gets on the charts is danceable. It’s all about movement, that’s the common thread and it has been there since the dawn of time, and it’s going to keep on going. I don’t know if there will be another Beatles but there will be something new next week and people are going to be dancing to it.”

On the title of the current chapter of his life, Perry said with a sweet laugh, “Training my new German Shepherd.” “He is about eight months old,” he said. “My wife and I love all animals. Due to traveling and touring, I never had a chance to find one and raise him from a puppy, but COVID gave us a chance to do that. We have a German Shepherd now and he likes to keep things interesting.”

When asked if guitar legend Link Wray was an influence on him growing up, he said, “Yes, definitely. I learned that it’s not about technique, it’s about coming from a different place, if a place that feels good, then you are on the right track. Don’t sweat the small things.”

“Link Wray’s single ‘Rumble’ was the only instrumental song to be banned, and it’s amazing since anybody who has picked up a guitar can play the song within half an hour. You don’t have to play like Eddie Van Halen or Jimmy Page to play a song that catches people, and that’s the biggest lesson you can learn from that,” Perry added.

On his definition of success, Perry said, “Trying to get though the day without making too much of a mess.”

For his longtime fans, Perry concluded, “Thanks. I am amazingly thankful that I have been able to entertain as many people as I have over so many generations. Also, I was able to hook up with four other guys that had that same vision. It has been a pretty amazing journey.”

In this article:Aerosmith, Band, Hall of Fame, Joe perry, Rock and Roll