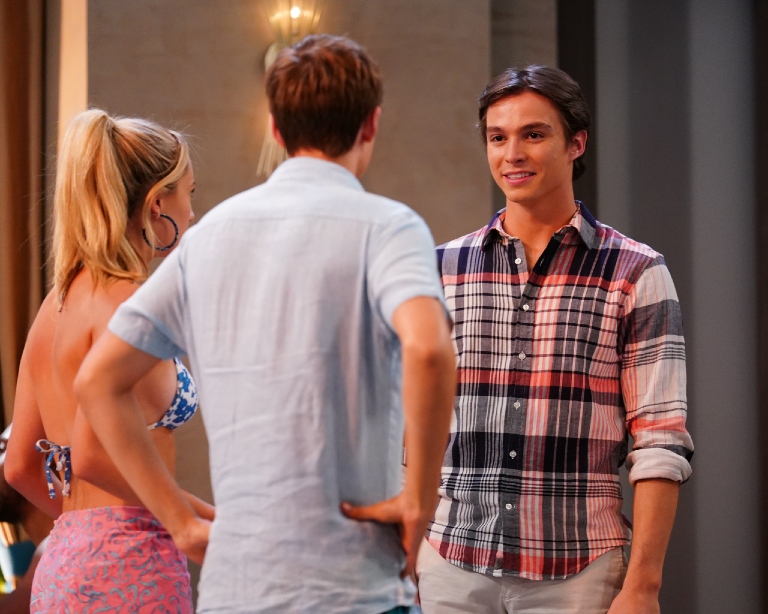 American entrepreneur Sam Altman once said: “Young people willing to push super hard to make something happen are among the most powerful forces in the world.” Nicholas Alexander Chavez is such an inspiring young individual and actor.

On joining the cast of “General Hospital,” Chavez said, “It feels completely and totally surreal. It has been such a massive blessing, especially to work with people that talented. It’s so incredible, it’s an actor’s dream. All I ever wanted to be is a working actor. ‘General Hospital’ is a very supportive environment.”

He is drawn to playing Spencer for many reasons. “Spencer is a really dynamic character. He has this facade that he hides behind but it’s a fun facade that he puts up. It’s something that has been engraved in him his whole life. He is able to have moments of vulnerability with Trina, and also, Spencer doesn’t pull any punches, especially in his scenes with Ava, which are so fun.”

Chavez had great words about working with actor Marcus Coloma, who plays his on-screen father Nikolas Cassadine. “Marcus and I have become best friends. He is so incredible. I really really love that guy. He is so awesome and has given him so much amazing insight. Marcus has taken on the role of a mentor to me and the role of a friend. We really hit it off,” he said.

“Marcus and I actually play chess all the time. We send each other chess memes on Instagram,” Chavez said with a sweet laugh.

He also complimented co-stars William Lipton, Eden McCoy, and Sydney Mikayla. “They are all so great and welcoming,” he said. “We have a really great dynamic, the four of us. We have a great offscreen friendship and that helps the chemistry on-screen. We have a good time. They are all so talented. William is also super-talented with his music, it’s just an amazing crew.”

Chavez praised Maura West for being an acting queen. “Maua is a tour-de-force of an actress. She is an incredible talent,” he admitted.

He shared that he has an “awesome” off-screen relationship with co-star Johnny Wactor. “I’ve become friends with Johnny through Marcus,” he said. “Johnny is such a great guy.”

Chavez enjoys the new pool in the “General Hospital” Metro Court. “The set design for the pool is unreal. It is so cool, it looks totally gorgeous,” he said. “It was fun Josslyn pushing Spencer into the pool. I really enjoyed that a lot.”

When asked how he handles being dialogue-heavy, Chavez responded, “It has definitely been an adjustment. Your memory is a muscle and the more that you work it, the easier it becomes. The first couple of weeks are pretty tough, but now I understand the pacing of the show. It has gotten easier, which is great..”

For young and aspiring actors, he said, “Take care of the work and the work will take care of you.”

On being an actor in the digital age, he said, “Streaming services are a very convenient way to consume content. It is great to be able to tell people that ‘General Hospital’ is on Hulu. Streaming has made things easier for me and my circle of friends and family to be able to watch and support the show.”

He listed Amy Adams, Christian Bale, Gary Oldman, and Sir Anthony Hopkins as the actors that he would love to someday work with as his dream acting partners. “These would be amazing,” he said.

On November 20 and 21, Chavez will be a part of the “General Hospital Fantasy” in-person events in Andover, Massachusetts, and Long Island, New York, respectively. To learn more about these upcoming fan events, click here. “I will be in Massachusetts and Long Island for the Fantasy Events,” he said. “I am so excited to meet all of the fans on the show. I will also bring some headshots with me too to sign some autographs. That will be so much fun. I can’t wait. It will be my first General Hospital Fantasy event, which is really cool.”

He shared that he enjoys doing swimming and revealed that his favorite stroke is “the backstroke.” “I did the swim team when I was younger and I was absolutely deadly with the backstroke,” he said.

On the title of the current chapter of his life, Chavez said, “Gratitude.” “I am beyond grateful,” he said.

Chavez defined the word success as “to be happy through giving your best effort in everything you do.” “It’s happiness through effort,” he said.

For his fans and supporters, he concluded, “Thank you so much, keep working in your own way and your own life and never stop since success is just around the corner.”

To learn more about Nicholas Alexander Chavez, check out his IMDb page and follow him on Instagram.