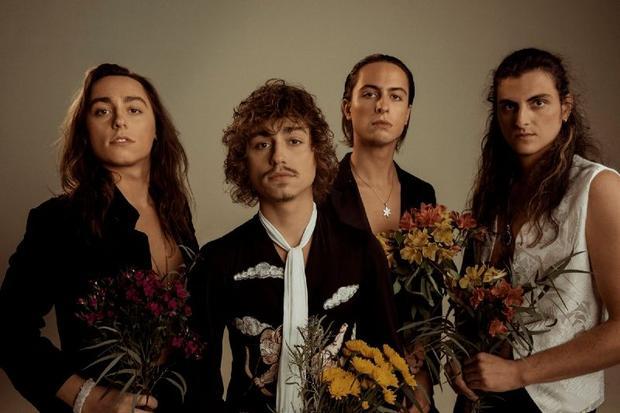 Aside from Josh Kiszka on lead vocals, Greta Van Fleet is made up of Jake Kiszka on guitar, Sam Kiszka on the bass, and Danny Wagner on the drums.

‘The Battle at Garden’s Gate’

Their forthcoming studio album The Battle at Garden’s Gate will be released on April 16 via Lava/Republic Records. It was recorded in Los Angeles, California, where they worked with producer Greg Kurstin. “We wanted to make something cinematic on a bigger scale, and eventually, it was more evident what the album was about. It has some really important yet sometimes controversial themes that need to be discussed. I hope the album is real and very modern to people,” he said.

“It’s a dense and eclectic album,” he admitted. “We want it to be organic, raw, honest, and original. I hope this album gives people some hope and I hope everyone takes away something different from it. Honestly, I hope it opens up some new thoughts and gives people a sense of salvation or purpose.”

Regarding his songwriting inspirations, Josh said, “My inspirations come from a lot of places. A great deal comes from the literature that I was turned onto as a kid. I read a lot of Aldous Huxley and a lot of modern American literature such as Ernest Hemingway and John Steinbeck.”

“I really like ‘Tears of Rain’ right now,” he said about his personal favorite song on the album at the moment.

For Josh, being a singer in a rock and roll band was the last thing that he ever thought that he would be. Josh studied theatre in school, he was in school plays, and he was also involved in local community musical theatre.

He considers himself primarily a writer, someone who loves to tell stories, which answers him being the band’s lyricist. He writes, shoots, directs, and edits videos and is involved in the stage production design for Greta Van Fleet.

On being an artist in the digital age, at a time when technology and social media are so prevalent, he said, “I think it really challenges artists to push themselves further, especially since the bar is so high and there are so many people making music. It really keeps you on your toes.”

Josh shared that he loves vinyl, especially the tangible aspect of it. “I think vinyl is very healthy,” he said.

Their From The Fires album won the 2019 Grammy Award for “Best Rock Album.” It garnered a rave review from Digital Journal. “That was unexpected, honestly,” he said. “I thought that if we were to win any of those categories, the rock and roll album would be the one we wanted.”

For young and aspiring bands and artists, he said, “Don’t ever feel small or insignificant. Everything you are doing is the right thing and if you follow your instincts and trust yourself and know that if you go into something with good intentions, you will generally find yourself in a really good place.”

Particularly impressive about Josh is that he is extremely world music-oriented: African spiritual, Native American tribal, and his heroes comprise an interesting “hat trick”: Hunter S. Thompson, Andy Kaufman, and Stanley Kubrick. “I listened to a lot of world music,” he said.

“Musically speaking, I really loved Aretha Franklin, and I liked James Brown and a lot of the soul bands such as Wilson Pickett and Sam & Dave. Some of that music really stood out to me,” he said.

Josh listed Florence Welch of Florence + The Machine as his dream collaboration choice in music. “There is some big rock and roll spirit about what they do, and it’s an incredible band and a very energetic act,” he said. “Her voice is ethereal, definitely.”

He noted that he has been “pretty decent” during the quarantine though he does miss touring. “It’s just a change of gears,” he said. “We are writing a lot and playing a lot, just obviously, not in front of people. It has been all right. Domestication is something we are totally afraid of.”

“The quarantine was a moment to meditate and reflect on a lot of things that were previously really difficult to figure out,” he added.

He actively stays busy all the time, thus leaving no room for stagnance. “The more turmoil, the better art,” he said.

Josh defined the word success as “self-satisfaction.” “Believing that what you are doing is making the world a little bit of a better place, and hopefully, that is what we are doing. I would like to inspire people to do something artistically original that they truly believe in. I think that’s a huge virtue,” he said.

For their fans and supporters, Josh remarked about the new album, “Listen to the album loud.”

The new album The Battle at Garden’s Gate by Greta Van Fleet is available for pre-order by clicking here.