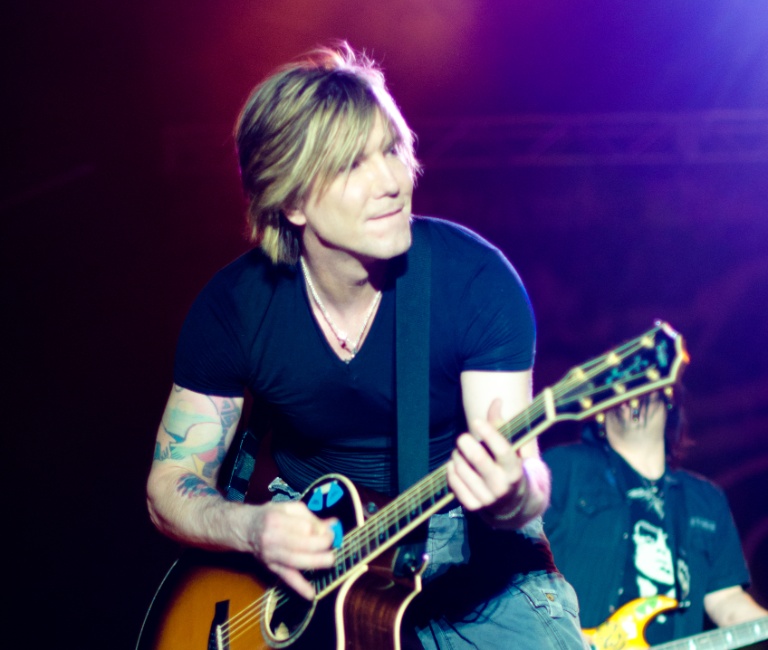 Johnny Rzeznik, best known as the guitarist, frontman, and founding member of the rock band Goo Goo Dolls, catches up about his latest endeavors, which include their summer tour.

On Tuesday, May 17, he was recognized as “Rocker of The Year” at the Little Kids Rock 20th anniversary benefit. “That was really a lot of fun, it was sweet. There were a lot of great kids there performing. It was a really sweet and heartwarming event,” he said.

“When I was younger, I wasn’t that good in sports, and there were bullies hanging around, and music allowed me to find a group of people where I could be myself with and be accepted by,” he added.

Little Kids Rock is a national nonprofit on a mission to transform lives by restoring, expanding, and innovating music education in public schools across the country.

The Goo Goo Dolls will be touring the country starting this June as part of their summer tour. “I am very excited about the summer tour,” he said. “Blue October is a great band, and perhaps the normal pieces of life that keep us sane are going to start working again although where I live in New Jersey there is a huge COVID spike.”

On August 20, they will be playing at the Northwell Health at Jones Beach Theater in Wantagh on Long Island. “I love Jones Beach,” he exclaimed. “That’s the gig that I always look forward to because it is such a classic and great place.”

“I just hope everything works out for this summer,” he added.

With over 30 years together as a group, over 15 million albums sold, and 16 Number 1 and Top 10 hits, the Goo Goo Dolls remain at the top of their game.

Formed in Buffalo, NY back in 1986 by Johnny Rzeznik and Robby Takac, the Goo Goo Dolls quietly broke records, and contributed a string of staples to the American songbook, connected to millions of fans, and indelibly impacted popular music for three-plus decades.

Beyond selling 12 million records worldwide, the group garnered four Grammy nominations and seized a page in the history books by achieving 14 number one and Top 10 hits at Hot AC—”the most of any artist.” As a result, they hold the all-time radio record for “Most Top 10 Singles.”

Their music has been covered by everyone from Taylor Swift to Leona Lewis. Among many accolades, John received the prestigious “Hal David Starlight Award” in 2008 as well.

Following a sold-out 2018 twentieth anniversary tour in celebration of “Dizzy Up The Girl,” Goo Goo Dolls wrote and recorded their twelfth full-length album, “Miracle Pill” [Warner Records]—igniting a bold and bright new era in the process.

In the fall of 2021, the band began a new chapter with the release of their first-ever holiday record “It’s Christmas All Over.” “Making the Christmas CD was probably the most fun I ever had making a record,” he said. “It was something that I always wanted to do: I always wanted to make a Christmas album. That was a lot of fun to do.”

“I am finishing the last mix for a new record that is coming out this summer, so it has been busy,” he added.

On being an artist in the digital age, Rzeznik said, “It is interesting to see the numbers. As an artist, musician, or the talent in the situation, I think that the artists need to be paid better. It’s obscene how much money is being made and how little the people that create the content get”

During the pandemic, a silver lining for Rzeznik was that he was able to spend a lot more time with his kid, Liliana.

On the title of the current chapter of his life, Rzeznik responded, “Struggling for Normal.”

He listed Grace VanderWaal as his dream collaboration choice in music. “Grace is really young but I absolutely love her voice. She has a very interesting and unique style of her own,” he said.

Rzeznik also complimeted Valerie Broussard for being “good.” Broussard had released her own angelic cover of the Goo Goo Dolls’ “Iris.” “Collaborating with her would be fun actually,” he said.

If he were to have any superpower, he revealed that he would be “Plastic Man.” “When I was young, Plastic Man was my favorite superhero, he could turn himself into anything,” he said.

He defined the word success as “getting through to the end of the day and doing the best that you can.”

For his fans, he concluded about their summer tour, “We miss you guys, we are really happy that we are getting the chance to come back out there. Come early and stay late.”

To learn more about the Goo Goo Dolls, their music and tour dates, check out their official website.