On June 21, 2018, Michaels will be performing at the Jones Beach Theater in Wantagh, New York, with his band, Poison, as well as Cheap Trick and Pop Evil, as part of the “Nothin’ But A Good Time” Tour. “Jones Beach is hands down one of my favorite shows. I love the fans and the energy, and I get to be out there with my dirt bike. It’s amazing,” he said.

Speaking of Wantagh, last summer, in August of 2017, Michaels performed a sold-out show at Mulcahy’s Pub and Concert Hall. “Whenever we play Mulcahy’s, we call it the ultimate party,” he said. “Everybody was partying and having a great time. It was just awesome. That was a great show. We were told that they’ve never had that many bodies in the building. It was great.”

Bret’s Classic Acoustic Songs and Stories will launch this fall, and fans can get a sneak peek at his official website. “It gives people an in-depth look of what inspires music. To me, music is therapeutic, and it there in the good times, and especially, in my bad times. It has truly saved my life in moments,” he said.

The iconic rocker has a new lifestyle collection coming this spring and summer. This will include the first-ever Bret Michaels candle, inspirational cards (both digital and paper), guitars, and holiday cards, among others.

Bret’s Life Rocks Foundation, is a unique dollar in dollar out foundation, that gives back to multiple causes including diabetes research, wounded soldiers, and animals in need (pet shelters), among others. “It is a foundation that I set up, and I find a cause in each place that I play, and we donate money,” he said.

Michaels is in the second year of his sold-out “Party Starts Now” solo tour, which has brought record-breaking numbers to outdoor festivals and arenas. “So far, we have had a sold-out tour since the beginning of the year. The ‘Party Starts Now’ tour will continue throughout the end of the year,” he said.

When asked what motivates him each day, Michaels said, “First of all, I feel grateful. I am thankful to all of the amazing fans that have been there for me, to live this dream out. I am passionate about doing things, and I have a really strong work ethic. The harder I work, the luckier I get. Nothing has ever truly fallen in my lap, but I love working since I enjoy making music and being creative.”

Michaels continued, “The most magical moment like Mulcahy’s or Jones Beach is the minute I get to walk out on that stage. That is the ultimate pay-off, and the ultimate icing on the cake. I am extremely proactive and I love slapping hands. I like making a party out of each show, since I am in a great mood and I am feeling thankful. I want the fans to feel the same way. I want them to leave as excited as I did.”

His latest single, “Jorja Bleu,” was penned for and named after his youngest daughter. “When I did that song, my daughter was going through a tough moment in her life. I wanted to do it very raw and very acoustic, with a little backbeat to it. Those lyrics were meant for me to her, and a lot of people that are going through different situations in their life can relate to this song,” he said.

Michaels has the largest artist influenced hotel suite ever built, which is located at the Hard Rock Hotel in Riviera Maya. This suite has been named Mexico’s leading hotel suite, and it has won recognition for design and for its amenities. It features Michaels’ historic memorabilia which spans throughout his entertainment career.

For aspiring singer-songwriters and bands, the veteran rocker said, “Bet on yourself. Find a way to get it done. Surround yourself with great people. If there is a problem, fix it. If there is a weak link in the chain, fix it since you are only as good as your weakest link. Most important, don’t be bitter, and embrace your passion. You need to have a fighting spirit.”

On the impact of technology on the music business, Michaels said, “Personally, I think technology is awesome. I always tell people to remember that as easily they can get exposed, they can easily get disposed. Make sure that you still write from your heart and your soul. Make sure that what you put out there is what you feel good about. You need to love what you are doing, but embrace technology. New technology is awesome. There are so many great, new independent artists that are able to put their music out there, when maybe before labels may have turned them down.”

Michaels also noted that vinyl is huge. “As Poison, we want to make our VIP meet and greet for fans epic. We added signed vinyl to that experience. It looks amazingly cool. There is a certain warmth when you put that needle to the vinyl that sounds amazing.” 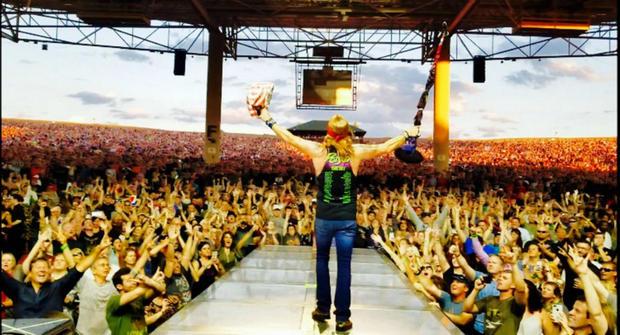 The rock superstar defined the word success as follows: “To be able to do what I love to do, and be passionate about it. To be able to do that for the past 30 years, means everything to me in my professional life. In my personal life, being able to have two beautiful daughters and being able to be a good dad to them, and looking for that balance. You have to find that balance of doing what you love as a parent, and love everything you do with your kids.”

To learn more about Poison and their 2018 “Nothin’ But A Good Time” touring schedule, check out their official website.