The Hits Re-Imagined was released on July 24, and it is available on digital service providers by clicking here. It was co-produced by Anderson and Thomm Jutz, and it includes instrumental versions of every tune. “I am pretty proud of the instrumental versions too,” he admitted. “We didn’t try to do anything fancy, we tried to play the melodies so that it can be something people can enjoy listening to or sing along with. We have been getting a lot of compliments on those.”

His mantel holds over 50 BMI Awards, three Country Music Association (CMA) Awards, and two Academy of Country Music (ACM) Awards. “Those feel great and wonderful,” he said. “I didn’t get in this business to win awards but it’s very nice when they give me one.”

As a songwriter, Anderson’s songs have been recorded by such diverse artists as George Strait, Brad Paisley, Connie Smith, and Kenny Chesney, among others. He is the sole songwriter to chart country songs in seven consecutive decades. “I have been very fortunate and very blessed,” he said. “I am still writing so maybe I can be lucky and make it to eight consecutive decades,” he added with a sweet laugh.

On being an artist in the digital age, he said, “I’m all for anything that gets my music out for people to hear it.”

During this COVID-19 pandemic, Anderson shared that he has stayed home and he misses being on the Grand Ole Opry. “I miss travelling and meeting the fans. It is what it is and we all have to live with it,” he said. “I hope people try to keep smiling and try to look at the positive side in this pandemic. They should be thankful for all the blessings that they have, and be determined to get through it and we will.”

He shared that he has developed some new skills during this pandemic: “sleeping late, cooking my own meals, and writing new songs.” “Some good will come out of this for sure,” he said.

Anderson took the time to pay his respects to his late duet partner and friend, Jan Howard, who was affectionately known as the “Classiest Lady in Country Music.” “Jan and I had a history together. We worked together for a long time and we traveled together, did television together, and we made records together. Jan was a dear friend. I was very saddened about her passing, ” he said.

The veteran country crooner defined the word success as “validation of a lot of hard work.” “My peace of mind does not come from material things, it comes from other places. I put a lot more emphasis on being happy and being content,” he said.

To learn more about Country Music Hall of Famer Bill Anderson and his latest album, The Hits Re-Imagined, visit his official website and his Facebook page. 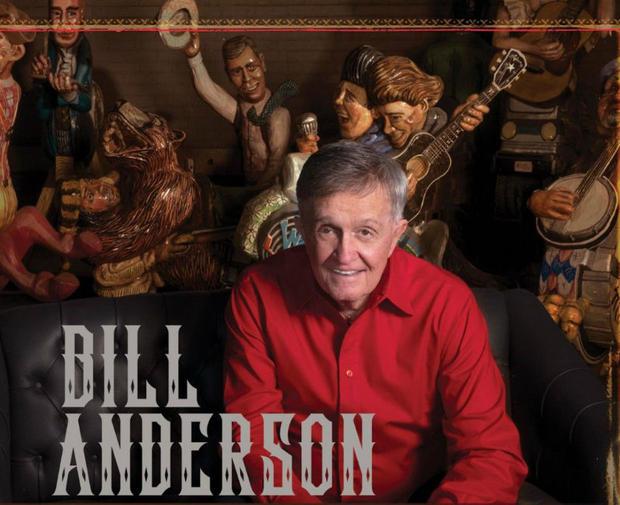