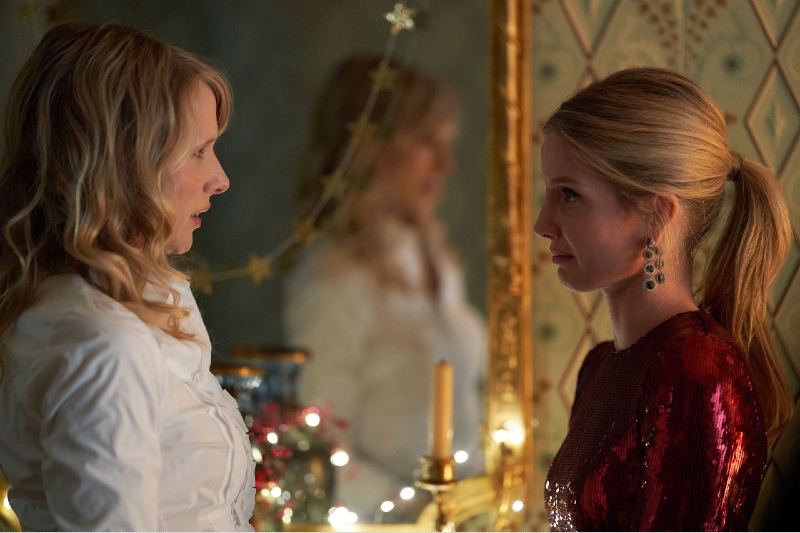 British actress Annabelle Wallis chatted with Digital Journal’s Markos Papadatos about starring in the new film “Silent Night,” which was written and directed by Camille Griffin. She opened up about being an actress in the digital age and she furnished her advice for hopefuls who wish to go into the acting and entertainment world.

Track and field icon Wilma Rudolph once said: “Never underestimate the power of dreams and the influence of the human spirit. We are all the same in this notion: The potential for greatness lives within each of us.” Annabelle Wallis is such an individual and actress that epitomizes this inspirational quotation.

The darkly comedic drama “Silent Night” is set to debut in theaters and stream exclusively in North America on Friday, December 3. Matthew Vaughn, Trudie Styler, and Celine Rattray served as producers. “It was amazing to be a part of it,” she admitted. “It was so funny, emotional, poignant, and it was saying something. It was a great honor and I loved it, especially my ensemble cast and my director. It was a dream project and I really responded to the script, where Camille did an amazing job.”

“Silent Night” is available in theaters and AMC+ on December 3. This film marks writer Camille Griffin’s directorial debut, and the film focuses on a group of friends that comes together for an eventful Christmas dinner.

“Camille Griffin is a force field, she is something to watch. She is going to take this moment and she is going to skyrocket and make some incredible films with incredible characters and meaning. I am so excited to see what Camille does next,” Wallis said.

Wallis plays the role of Sandra, and she is drawn to her character for several reasons. “Sandra is absolutely outrageous,” she said. “Sandra is the one you want to hate but hopefully, you fall in love with her because she is deeply honest and flawed in a way that comes from deep hurt and a need for acceptance. I just love a British eccentric. There is not much comedy that comes my way, and I’ve been looking for an avenue there. This is the type of comedy where I can go for it.”

She had great words about working with co-star Lucy Punch and Wallis shared that she loved her scenes with her. “Lucy is a great comedic actress and she is just phenomenal, and I couldn’t stop laughing after my scenes with Lucy. That was the only problem in our film, everyone would laugh off-camera,” Wallis said. “Lucy is incredible and I really hope that we work together again.”

Synopsis of the film

‘Silent Night’ follows parents Nell (Keira Knightley) and Simon (Matthew Goode) who have invited their closest friends to join their family for Christmas dinner at their idyllic home in the English countryside.

As the group comes together, it feels like old times but behind all of the laughter and merriment, something is not quite right.  The world outside is facing impending doom, and no amount of gifts, games or Prosecco can make mankind’s imminent destruction go away. Surviving the holidays just got a lot more complicated.

Wallis opened up about her daily motivations as an actress. “I am motivated to tell important stories, and to stretch myself as a creative and to value being here and the opportunity to be able to live and survive from my work,” she said.

“I try to say something important with honesty,” Wallis added.

On being an actress in the digital age, Wallis said, “I think it’s really interesting. We are in the middle of this transition and I really hope cinema lasts forever because there is such a romance about going to see a film on a big screen.”

“I do find it interesting how actors on streaming platforms get so much more time with their characters and they get to form these relationships with them. You also have shows that have a life of their own. I was on a show called ‘Peaky Blinders’ and every time Netflix opens in a new territory, you get this explosion of new fans and new people get to watch it and I think that’s really exciting because there is a much more global audience and I think that’s great,” she elaborated.

Regarding the title of the current chapter of her life, Wallis revealed, “Step into Bravery.” “Continually step into bravery with work, life, and everything,” she said.

When asked about her career-defining moments, she responded, “When I first worked with Cillian Murphy on ‘Peaky Blinders,’ it was the first time that I had been seen in a way that I recognized that if I try to pursue that, then I could really say something important,” she said.

“Try to work with the best since they will elevate you. That helped me in my career and my own self,” she added.

She recalled playing Queen Jane Seymour in the hit Showtime drama series “The Tudors” opposite Jonathan Rhys Meyers as King Henry VIII. “Playing Jane Seymour in ‘The Tudors’ was another defining moment. Jane was wonderful and it was great to play someone with so much historical significance,” she said.

“An English rose,” she said with a sweet laugh. “‘The Tudors’ was one of the shows that first made TV cinematic, and it gave it scope. I remember being on those huge sets and feeling like I was part of something really special, and it still has such a big audience to this day. I was very grateful to be a part of that.”

For young and aspiring actors, Wallis said, “Do the work for the right reasons. Work hard and keep your head down. Be kind and be good to people.”

“Always be good to people,” she reiterated. “Most importantly, be good to yourself.”

“You can never underestimate your audience and if you don’t tell them the truth, they will know. So be prepared to honor them with the truth,” she explained. “Then, you can play and have fun, and then something else occurs.”

On her definition of the word success, Wallis concluded, “Success means that you have remained a good person and that you have wonderful people in your life, and that you are a person of integrity. Also, you are someone who knows how to hold others in reverence.”