Work is starting to pile up for Colton Tapp. “Things are moving quickly and I’m lucky enough to be at a point where things I did last year are coming out while I’m currently working on new projects, so it’s an exciting time,” he notes. “In fact I just got back from a premiere of my latest release, the feature film Three Days in August.”

Colton plays Liam in the movie about an Irish American artist forced to confront her past that also stars Barry Bostwick and Meg Foster. “Adopted parents, birth parents, daughter… one house, three days, Three Days in August looks at a subject many families can relate to,” he explains.

“It spares no feelings or grimy truths and vividly shows the role that self-identification plays in adoption. It’s actually a very funny movie, though, believe it or not… On one of the last nights of shooting, we had an epic Irish dance party in the courtyard of the ranch we were shooting at. Some people from Riverdance were there and this awesome Irish band playing music.” 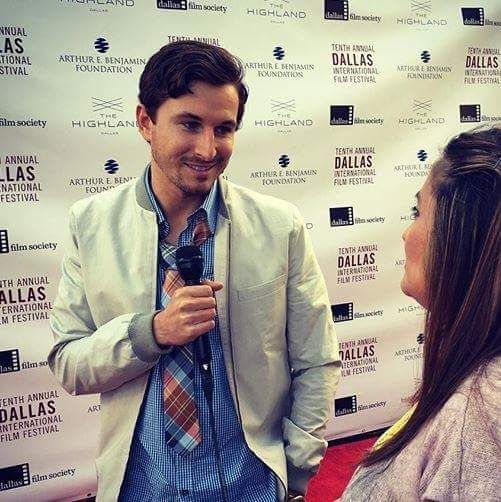 Colton at the Dallas International Film Festival – for ‘Three Days in August.’
ColtonTapp.com
Advertisement. Scroll to continue reading.
Another recent film to feature the increasingly sought-after Texan, who has written a soon-to-be-released short film entitled Death Road, is Pi Day Die Day. What’s that about?

“It’s a new holiday horror film that pays homage to the big teen slashers (Ari Lehman from Friday the 13th also stars in it). The killer comes out on a new holiday this time, though: Pi Day.”

Tapp recently won the best actor award at the Dallas Horror Film Festival and the prize for 2nd Best Film at the Rack Focus Film Festival. “I was very grateful to receive both awards and learn that our projects were received well,” he reflects. “When you finally finish a project that really wins over the audience’s heart, you know you’ve done well.”

“Such a tough one to answer!” he exclaims when asked to name his most memorable parts to date. “I’ve played some roles that really grabbed me, from a high school teenager with secret super powers (‘The Enabler’) to a heroin addict. But I’m very excited about my performance as John Wilkes Booth in my new feature Solar Eclipse which will be out in summer 2017. The sweet moustache I have on during the film is enough to make it a favourite…” 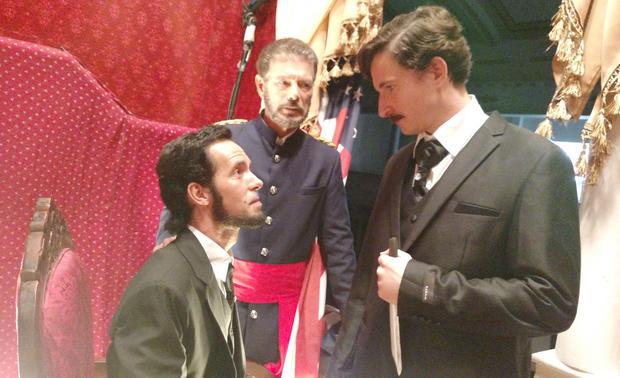 Behind the scenes shot of Colton (as John Wilkes Booth) in ‘Solar Eclipse.’
ColtonTapp.com
Advertisement. Scroll to continue reading.
Like so many of his peers, Colton, who was cast as the Lead News Anchor in his senior year at high school (his first major step on the acting ladder), is to be painted by renowned “portrait painter to the stars” AraDona. The sitting is for the Skye Art Gallery and will take place in Las Vegas on May 21.

“I’ll be getting immortalised on canvas as a featured celebrity by an incredibly talented artist,” confirms the budding film star. “He’ll be painting me live that weekend at the Skye in the Forum Shops by Caesars Palace.”